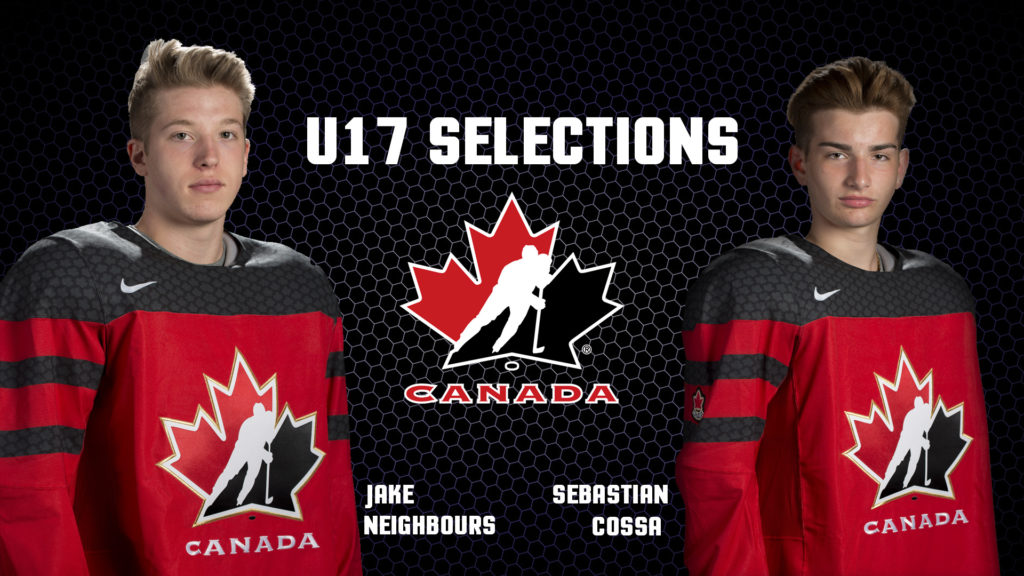 The U17 tournament takes place from November 3-10, 2018 and will be hosted at Harbour Station in Saint John and the qplex in Quispamsis, New Brunswick.

Neighbours and Cossa will dress for one of three Canadian teams – Canada Red, Canada Black or Canada White – which will be announced at a later date. A complete list of the 66 players representing Canada can be found here.

Neighbours, an Airdrie, AB native, was the Oil Kings 1st round, 4th overall pick in the 2017 WHL Bantam Draft. The 5’11.5”, 196-pound left winger has posted seven points in 12 regular season games for the Oil Kings during the 2018-19 campaign, his first season as a WHL regular.  He scored his first career major junior goal vs. the Calgary Hitmen on September 29.

Neighbours captained Team Alberta at the 2017 WHL Cup, tallying one goal and seven points in five tournament games, with a plus/minus rating of +7 before falling to British Columbia, 4-3, in overtime in the tournament final.

“It’s pretty exciting,” said Neighbours, of getting the call from Hockey Canada. “It’s the first time I’m going to get the chance to wear the maple leaf and represent my country, so it’s a really big honour.”

Cossa was also a member of the Alberta squad who claimed a silver medal in last year’s WHL Cup, dressing in three games and finishing with a record of 1-0-1 with a goals against average of 3.15 and .882 save percentage. The 6’5.5”, 206-pound Fort McMurray, AB native participated in two preseason games with the Oil Kings before sustaining an injury which kept him sidelined from the start of the regular season.

“I’m very honoured to wear the Team Canada jersey. Hopefully my parents are able to be there to watch and I hope I make them proud. They’ve given up a lot for me so I can get chances to succeed just like the one I’ve been given by making the U17 team and I’m very thankful to them for that,” added Cossa.

The U17 tournament is the first step in Hockey Canada’s Program of Excellence. Along with the three Canadian teams, the tournament also features five international entries; Finland, Czech Republic, United States, Sweden and Russia.