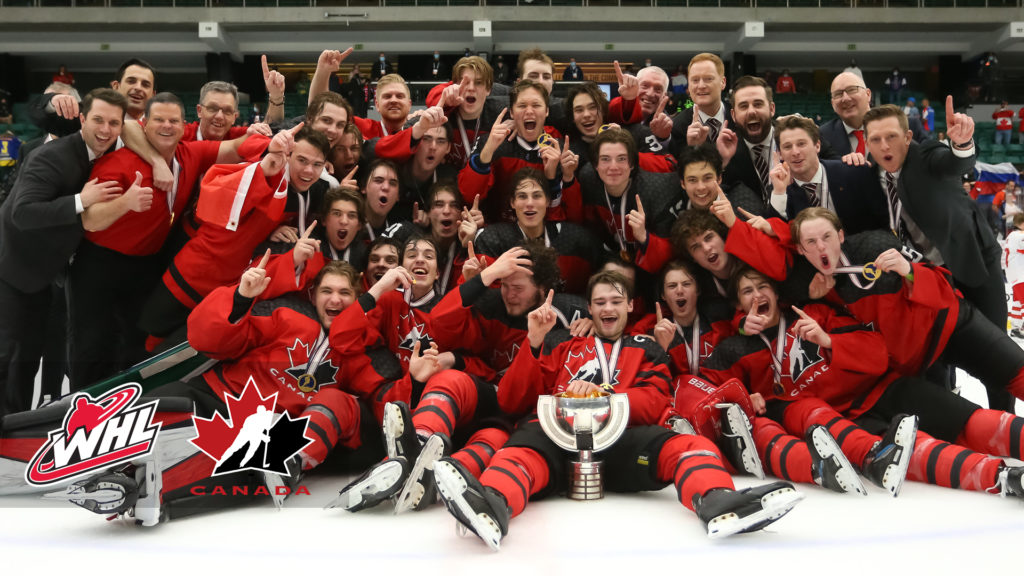 Calgary, Alta. – The Western Hockey League is proud to congratulate the nine WHL players representing Canada who earned gold medals at the 2021 IIHF U18 World Championship in Frisco and Plano, Texas.

Canada defeated Russia by a final score of 5-3 on Thursday night in Frisco, Texas.

As he did so often throughout the tournament, Bedard sparked Canada on Thursday night. After Russia opened the scoring 5:13 into regulation, the product of North Vancouver responded for Canada with an electrifying, highlight-reel goal 15:59 into the first period. The two teams exchanged goals once again and sat tied 2-2 after 20 minutes of play.

Thanks to a second period goal from Stankoven, Canada established a two-goal advantage after 40 minutes of play.

Russia made things close midway through the third period, making it a 4-3 game. Captain Shane Wright iced the affair, taking a record-setting pass from Bedard and depositing it into an empty net with 40 seconds to go.

With 14 points (7G-7A), the 15-year-old Bedard finished tied with Wright for the Canadian tournament scoring lead. Bedard was named to the Media All-Star Team for the tournament, recognition for a performance that included matching a record for points by a 15-year-old at the IIHF U18 World Championship, which was previously set by Canada’s Connor McDavid in 2013.

Including Thursday’s gold medal victory, Canada went on an undefeated run at the 2021 IIHF U18 World Championship, knocking off Sweden, Latvia, Switzerland, and Belarus in preliminary play before then beating the Czech Republic in the quarter-finals and Sweden once again in the semifinals.

Prior to Thursday’s gold-medal contest, Sweden claimed bronze, topping Finland by a final score of 8-0.