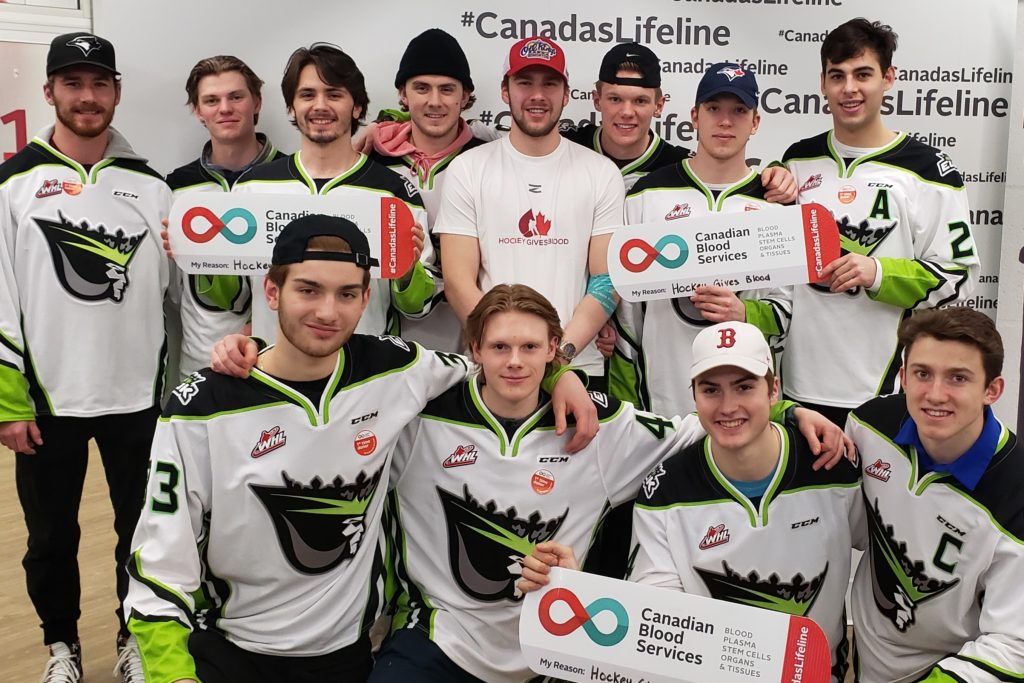 While the 2019-20 season may have been abruptly and unceremoniously cut short months ago, the hockey community is still teaming up to achieve a common goal:

Satiating an increased need for blood donors in Canada.

Those efforts will no doubt ramp up this week especially, as June 8-14, 2020 is National Blood Donor Week across the country, coinciding and culminating with World Blood Donor Day on June 14.

Canadian Blood Services hopes that despite the ongoing coronavirus implications that are impacting our society, the public realizes that donating blood is a safe – and imperative – thing to do.

“Blood donors are essential to Canada’s Lifeline,” says Deb Steele-Kretschmer, Strategic Communications Specialist with Canadian Blood Services. “We’re starting to see hospitals resume procedures that were previously put on hold due to COVID-19, so now more than ever, every blood donation appointment needs to be filled.

“What better time to ask Canadians to give than during National Blood Donor Week.”

Edmonton Oil Kings players, along with players from across the entirety of the Canadian Hockey League, have been doing their part before and during the prolonged offseason to ensure donations continue to come in through their pre-existing involvement with Hockey Gives Blood.

Big thank you to the front line workers! During these times especially it is important to donate blood to help save lives! @CanadasLifeline @hkygivesblood @EdmOilKings @NYRangers pic.twitter.com/faotcp33Jv

Hockey Gives Blood is a non-profit society that has partnered with Canadian Blood Services in an effort to engage and educate the hockey community about the importance of blood and stem cell donation. Oil Kings Assistant Coach Luke Pierce is Vice President of the program, which was spearheaded by his good friend and co-founder, Stu Middleton.

“As a part of Hockey Gives Blood, we have Player Ambassadors that really drive the initiative and make a great impact on the program,” says Middleton. “Having these young men from ages 16-20 spreading the importance of blood donation has really been key to connecting to that younger demographic.”

The Player Ambassadors of Hockey Gives Blood have not only become leaders in their communities, but has also inspired their teammates in what has become a domino effect to help spread word for the cause.

Ethan Cap is the Player Ambassador for the Oil Kings, and has been instrumental in involving his Edmonton teammates in the worthwhile call to action.

Even more serendipitously, Cap is also an O-negative blood type; a universal donor.

Other Player Ambassadors across the CHL who have made a substantial impact for Hockey Gives Blood and Canadian Blood Services include the first two winners of the Dayna Brons Honorary Award, which recognizes an individual from Canada’s hockey community who exhibits outstanding dedication towards patients who rely on blood and stem cell products in Canada; Jacob Ingham and Matthew Welsh.

Ingham, a goaltender for the Ontario Hockey League’s Kitchener Rangers, was the inaugural award winner in 2019, and was also named the 2019-20 OHL Humanitarian of the Year. Through his Jake Saves campaign this past season, the Ingham family donated $5 for every save he made – which was matched by the Rangers – totaling a donation of more than $26,010.

2020 Dan Snyder Memorial Trophy recipient @JacobIngham_ is honoured as the #OHL Humanitarian of the Year presented by @KiaCanada after a busy season both on the ice and in the community, doing tremendous work with @hkygivesblood in support of @CanadasLifeline. pic.twitter.com/mEPoDgo9oh

Welsh, a goaltender for the Quebec Major Junior Hockey League’s Charlottetown Islanders, was named this season’s winner after becoming a first time donor, leading a team blood donation event, helping to promote the stem cell registry, and rallying his team and community to win a blood drive challenge over the Saint John Sea Dogs and Moncton Wildcats.

Leaving a legacy on and off the ice.

While competitors on the ice these young men are united off of it, joined in their desire to spread the message of the importance of blood and plasma donation even though the challenging times of COVID-19.

“Typically Canadian Blood Services aims for 125 new donors and 1,040 units of blood, locally, on a weekly basis,” added Steele-Kretschmer. “The need of blood is constant, so we are encouraging donors to book appointments over the summer months and onwards, and to spread the word.”

When it comes to COVID-19 and donating, Steele-Kretschmer shares that while the process of giving blood has changed slightly during the pandemic, it is still incredibly safe.

“In addition to our routine cleaning, infection control and screening practices, we have introduced enhanced cleaning measures, wellness stations and physical distancing to better protect anyone who walks through our doors.

“If you’re in good health, we encourage you to book and honour your appointment and help those in need now.”