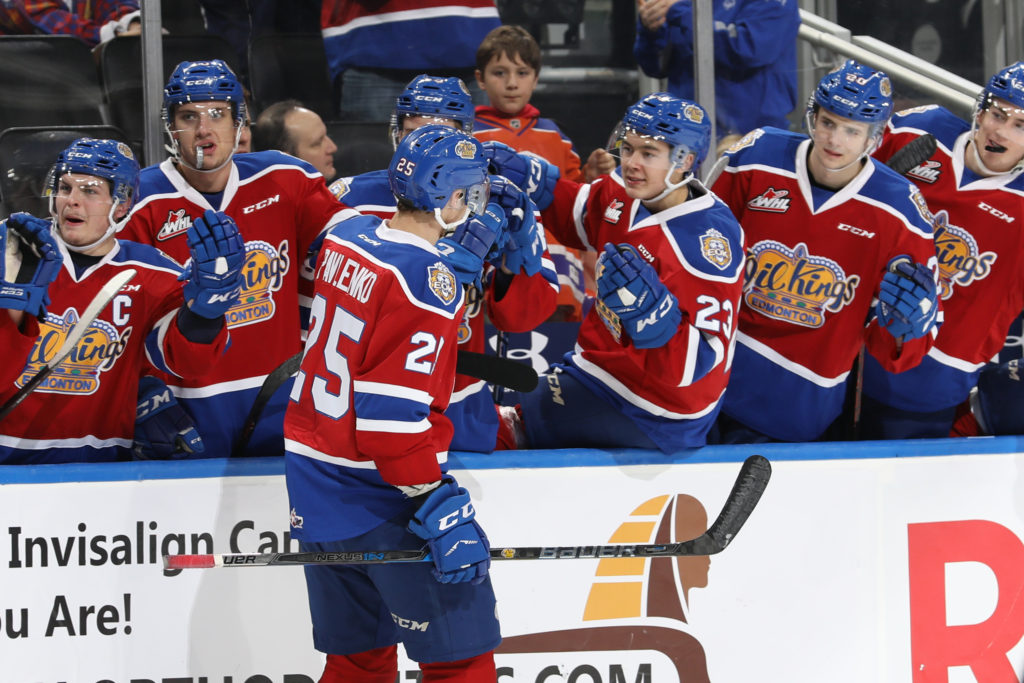 The win snapped an eight-game losing skid by the Oil Kings, earning them their first pair of points since September 29; a 6-3 win over the Calgary Hitmen.

Trey Fix-Wolansky also potted a pair of goals and added an assist as the newly formed top line of Fix-Wolansky, Vince Loschiavo (2A) and Jake Neighbours (1G) combined for a total of six points to help the team return to the win column.

Near the midway point of the period the ICE would tie things up as Brett Davis scored his fifth of the season to make it 1-1, from Cameron Hausinger, at 9:07.

But the Oil Kings lead was restored on a power play goal by Fix-Wolansky, his eighth of the season, from Conner McDonald and Quinn Benjafield making it 2-1 with just 2:04 to play in the period.

Edmonton had a slight edge in shots through the opening period, 13-12.

The Oil Kings once again struck early, this time in the second period as Matthew Robertson tallied his first of the season for the team’s second power play marker of the afternoon, from David Kope and Vladimir Alistrov, just 53 seconds in to make it 3-1, Edmonton.

Another first of the season came on the stick of Kaeden Taphorn, from Jakin Smallwood, at 3:13 to cut the Oil Kings lead to 3-2.

Pavlenko’s fourth of the season and second of the game was a one-timer that beat Makaj, assisted by Carter Souch and McDonald at 6:13, to give the Oil Kings back their two-goal lead, 4-2.

But with the hosts whistled for tripping and delay of game just four seconds apart, the ICE capitalized just 17 seconds into the 5-on-3 man advantage as Peyton Krebs notched his fourth of the season, from Martin Bodak and Jaeger White, at 13:09.

The Oil Kings third power play goal of the night came by way of Neighbours, as the winger scored his third of the season – and second in as many games – to once again give Edmonton a little breathing room with a two-goal lead, 5-3. Fix-Woansky and Loschiavo picked up the helpers as the period wound down at 19:46.

The lone goal of the third period came with just 1:54 remaining, as Fix-Wolansky potted his second of the game, from Loschiavo and Benjafield, at 18:06 to secure the 6-3 win.

Kootenay finished the night going 1-for-6 on the power play, while Edmonton was 3-for-8 with the man advantage.

The Oil Kings are back in action Friday, October 26 when they once again take on the Kootenay ICE, this time at Western Financial Place in Cranbrook at 7:00 PM MT. They return home for a pair of games to finish off a three-in-three, taking on the Saskatoon Blades on Saturday, October 27 at 7:00 PM MT, and the Lethbridge Hurricanes on Sunday, October 28 at 4:00 PM MT.

Saturday is Superhero Night, with all fans in attendance receiving a special edition poster upon entry to the game, along with the opportunity to meet and pose for pictures with more than 20 real life superheroes.

On Sunday, the fan that comes dressed in the best Halloween costume will receive a team autographed Edmonton Oil Kings jersey. Fans are also encouraged to stick around after the game for a full team autograph session as a part of Family Fun Sunday.