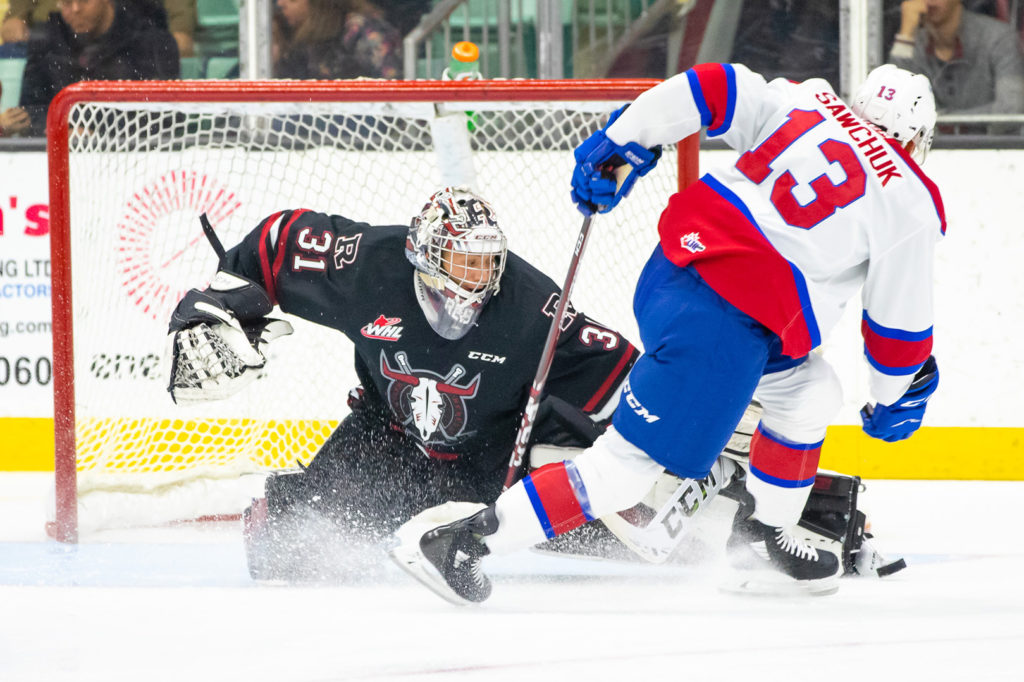 They’re the WHL’s highest scoring team, and on Friday night they flexed their offensive muscle.

Heading into tonight, the Oil Kings trailed the idle Medicine Hat Tigers (47) by one goal scored through 11 games played by each team to start the season, but the five-spot by the Oil Kings surged them into the lead in the offensive category.

Riley Sawchuk (1G, 1A), Josh Williams (1G, 1A) and Jake Neighbours (2A) registered multi-point performances, while Jalen Luypen, Vladimir Alistrov and Matthew Robertson were the other goal scorers who helped Edmonton maintain an undefeated-in-regulation start to the season on the road (5-0-3-0).

It was the third win of the season for Cossa who stood tall – literally – in goal, as the 6-foot-5.5 netminder maintained his status among the League’s leaders in both goals against average and shots on goal (1.46 and .952 respectfully, entering tonight). The Fort McMurray, AB native allowed just one goal on 22 Red Deer shots.

The Oil Kings etched the scoresheet early, as Sawchuk finished off a pretty give-and-go play with his linemates for his sixth of the season to make it 1-0 Edmonton just 1:56 in, with assists to David Kope and Neighbours.

At the midway point of the period it was 2-0, as a Keagan Slaney blast from the blueline found the stick of Luypen in front who tipped the puck past Anders at 9:59, with Dylan Guenther earning the second assist.

Closing out first period scoring was Williams, who forced a defensive zone turnover against the Rebels at the top of the circle and went backhand, extending the visitors lead to 3-0 with his fifth of the year, unassisted, at 12:52.

Over four minutes into the period Cossa continued to portray his potential, turning aside a 2-on-1 opportunity by the Rebels with a sliding toe save to his glove side.

A minute later captain Scott Atkinson burst into the Red Deer zone and fired a shot on goal which was deflected off a Rebels stick but turned aside by Anders. The rebound, however, jumped right onto the stick of Alistrov who buried his fifth of the season at 5:16, with Williams picking up the additional helper.

Just 1:03 after the Alistrov goal, Robertson lit the lamp for the second straight game. After teaming up with Williams to complete a 2-on-1 play for his second of the season against the Portland Winterhawks on Sunday, he collected his third of the campaign by searing a shot from the right face-off dot to make it 5-0, Oil Kings. The power play marker was assisted by Neighbours and Sawchuk at 6:19.

That ended the night for Anders and made way for Fancy in goal for the Rebels.

At 15:54 the Rebels got themselves on the board, as Camrose, AB native Chase Leslie tallied his first of the year to make it 5-1 Edmonton, and round out second period scoring.

In the third, the Rebels were awarded a four-minute power play after a high-sticking double minor to the Oil Kings, but the Edmonton penalty killers did their job – specifically Neighbours on a sequence which saw him block a point-black shot while in the slot, then spring through the neutral zone and gain a scoring chance for his team while shorthanded.

The Oil Kings would shut the door and close out the game for the remaining 11-plus minutes, securing the victory in their lone game in an 11-day span.

Red Deer was 0-for-5 on the power play while Edmonton went 1-for-5 with the man advantage.

The team is off for another six days until the next Friday, October 25 when they welcome former Oil Kings Brett Kemp, Parker Gavlas and the Medicine Hat Tigers to Rogers Place for a 7:00 PM MT start. Fans are encouraged to bring new and unworn socks to the game in support of Socktober and Operation Friendship Seniors Society for elderly in need in our community.

They close out next weekend on Saturday, October 26 when they host the Seattle Thunderbirds for Cartoon Festival at 7:00 PM MT.