Oil Kings Come Back for OT Win in Border Battle 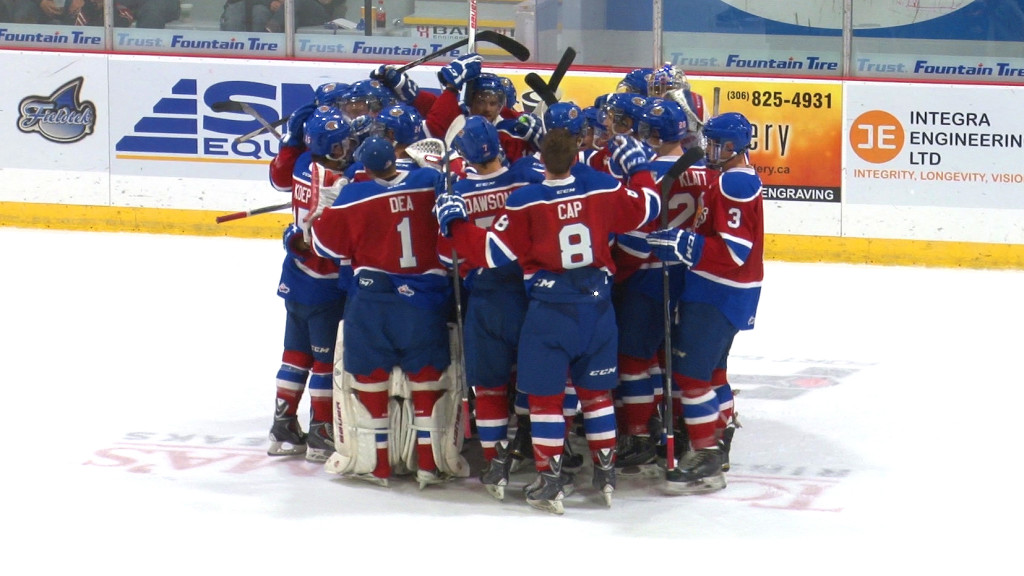 LLOYDMINSTER, SK – The Edmonton Oil Kings were down but never out Sunday night.

The Oil Kings never led in the first ever Border Battle against the Saskatoon Blades at the Centennial Civic Centre in Lloydminster, but they still managed to pull out a 4-3 overtime victory to improve to 2-0 in the preseason.

“That’s the Oil Kings’ motto. We’re always a team that never gives up,” said Brandon Baddock, who was honoured before the game for his time with the Lloydminster Bobcats. “Obviously you’ve seen that in the past, and it’s kind of nice to see that we still have that.”

“We could have folded it up and instead we stayed patient and had a good opportunity to tie it up,” added Oil Kings head coach Steve Hamilton.

Dario Meyer scored 41 seconds into overtime as Dysin Mayo beat everyone on a rush up the left side, then fed Meyer alone in the slot. The Swiss import roofed it for his second point of the night.

“We moved him to the wing tonight, wanted to give him a bit of a different look, and I thought he was great. When he had the puck, good things were happening for him,”Hamilton said.

“That was a great play in overtime. Dario didn’t have a lot of room, but he got it up in a hurry.”

Saskatoon jumped out to a 2-0 lead in the first period, but goals by Kole Gable and Davis Koch tied it up after 40 minutes. Chasetan Braid took advantage of a fortuitous bounce off the end boards to restore the Blades lead 5:54 into the third period, but the Oil Kings responded once again. Luke Bertolucci took a pass from Gable on the rush and buried one to tie it with 6:26 to play, setting up Meyer’s overtime winner.

“It was a little bit rough around the edges, which is kind of part of the exhibition season,” Hamilton said. “They were a pretty young team today, and they played a really aggressive game. I thought they accomplished what they wanted to do, which was create a lot of havoc out there.”

Meyer and Gable each finished with a goal and an assist for the Oil Kings, while Wyatt Sloboshan and Josh Paterson had the other goals for Saskatoon.

Patrick Dea stopped 12 of 14 shots faced while playing the first half of the game for Edmonton, while Alec Dillon stopped 12 of 13 shots to get the win.

Dorin Luding made 20 saves and allowed two goals through two periods for the Blades before giving way to Matt Kustra, who stopped five of seven shots.

The Oil Kings will next be in action Saturday, Sept. 12 when they host the Calgary Hitmen at 7 p.m. at Servus Place in St. Albert. Tickets will be $10 and available at the door. It will be Edmonton’s last home game of preseason.