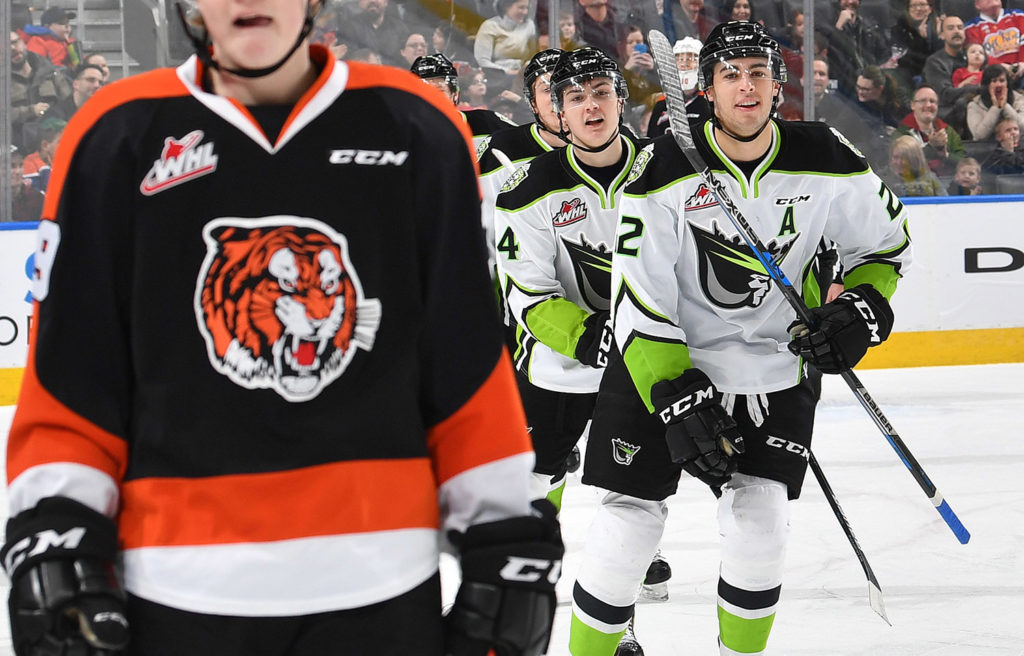 So close they can almost reach out and touch it.

Edmonton’s Magic Number to clinch a playoff berth is now down to two points. The Tigers – who currently hold the final Wild Card spot – could finish as high as 38 wins and 81 points. Even if the Tigers ran the table and won their seven remaining games, the Oil Kings would clinch a playoff berth with a win tomorrow night vs. the Brandon Wheat Kings, which would give them 82 points.

The Oil Kings maintained their two-point lead in the Central Division (80 points, 62 GP) after the Lethbridge Hurricanes (78 points, 62 GP) were also victorious on Friday, skating to a 5-0 win over the Moose Jaw Warriors.

Edmonton now boasts two 30-goal scorers on the campaign as Vince Loschiavo earned his 30th of the season, which also proved to be the game winner. The other 30-goal man, Trey Fix-Wolansky, added two more goals to his season totals tonight – his 32nd and 33rd – to help propel the Oil Kings to victory.

It marked the first time in his WHL career that Loschiavo reached the 30-goal mark, coming close in 2016-17 when he tallied 29 as a member of the Kootenay ICE.

Matthew Robertson opened the game’s scoring with a fortuitous bounce, as his initial shot repelled off the boards then hit the back of Sogaard’s left pad and into the net at 8:08 of the first period.

It was the only goal of the first 20 minutes, which saw Edmonton outshoot Medicine Hat by a 14-5 margin.

Midway through the second period the Tigers tied the game, 1-1 as Ryan Chyzowski tallied his 21st of the season – on the power play – at 9:38.

But the Oil Kings answered quickly and regained the lead under three minutes later on Fix-Wolansky’s first of the night and 32nd of the season, from Wyatt McLeod and David Kope, to make it a 2-1 game at 12:05.

Through two periods the Oil Kings were outshooting the Tigers, 29-20.

Medicine Hat again crept to within one, 3-2, at 7:27 of the third but Fix-Wolansky’s empty netter, assisted by Jake Neighbours, solidified the 4-2 final at 19:51.

Medicine Hat was 1-for-3 on the power play, while Edmonton finished the game going 0-for-4 with the man advantage.

The Oil Kings are back in action tomorrow night, Saturday, March 2 when they host the Brandon Wheat Kings at 7:00 PM MT with a chance to clinch a berth in the 2019 WHL Playoffs.