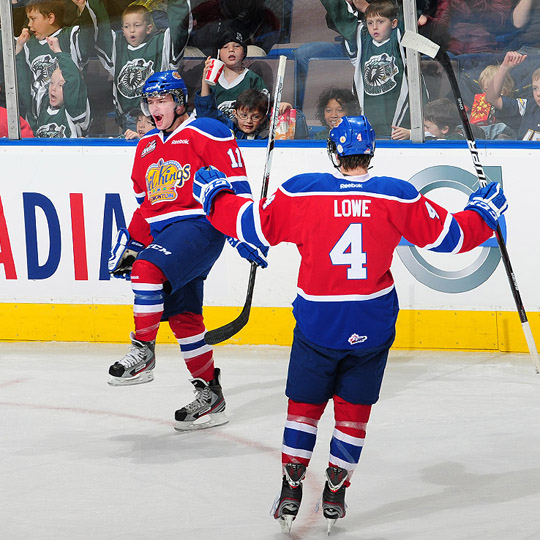 Edmonton, AB – Led once again on the score sheet by Michael St. Croix and Dylan Wruck the Edmonton Oil Kings muscled out a 4-1 win over the visiting Spokane Chiefs on Tuesday Night at Rexall Place. The Oil Kings were slow coming out of the gates as Spokane took and early lead on a screened shot from the point just 3:30 into the first period. Some solid play from Laurent Brossoit in the cage kept the Oil Kings within striking distance when finally Wruck found his spot inside the right faceoff circle and wired a wrist shot upstairs to tie things up with three and a half minutes to play in the first. Then in the final minute of the period, Wruck found himself in a similar position and wristed home another topshelf shot to give the Oil Kings a 2-1 lead going into the second despite being out 13-5.

The Oil Kings were once again outplayed in a scoreless second period but Brossoit continued to shine as the Chiefs out shot the Kings 10-5 in the period. Finally, Edmonton applied consistant pressure in the third as Michael St. Croix tallied his team leading 14th of the season on a one timer from the point on the power play to make it 3-1 midway through the final period. Cody Corbett would then score an extra insurence goal with about five to play as the Oil Kings pulled out a 4-1 win.

Wruck would finish the night with a pair of goals – including the eventual game winner. His line mate St.Croix had a goal and two assists as the Oil Kings scored their first ever win against the Chiefs in the modern era of the franchise. St. Croix has totalled an amazing 14 points with 7 goals in his last five games while Wruck has 12 points in his last six.

As mentioned, Brossoit was solid between the pipes making 29 saves on the night for his career best 14th win of the season. The Oil Kings power play was 1 for 3 while the second best penalty kill in the WHL held the Chiefs to 0 for 5 with the man advantage. With their fourth straight win Edmonton’s overall record moves to 16-8-1-2, good enough for second place in the Central Division just four points back of the Kootenay Ice.

The Oil Kings will now move on to the fourth in their run of 11 straight games at home this Thursday as they take on the Calgary Hitmen. Puck Drop is set for 7PM MST at Rexall Place – all games this season will be broadcast live on the TEAM 1260 and streamed live at WHL.ca

Follow these links:
FOR THE WHL SCORING SUMMARY
FOR VIDEO HIGHLIGHTS
FOR GAME DAY PHOTOS