Oil Kings Fall Just Short of a Comeback in Kootenay 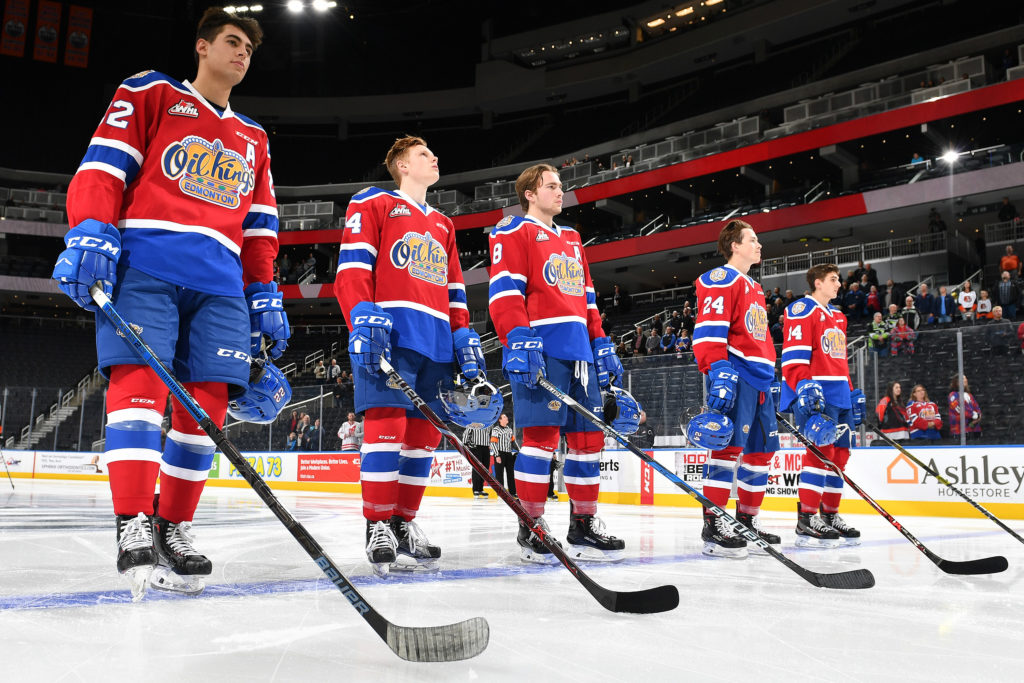 First they looked down and out; then they looked like the comeback Kings. Nonetheless, the Edmonton Oil Kings skated away from their first of six consecutive games on the road with a thrilling point.

The improbable game-tying goal came with just five seconds to play in regulation, and after the initial call on the ice was waved off as no goal. The Central Division leading Oil Kings may have expected an easier fate heading into tonight’s game against the ICE, but will no doubt take the lone point after the deficits they faced.

Duncan McGovern (2-1-0-0) made 24 saves to backstop his team to just their second win of the young season.

It was former Oil King Brendan Semchuk who opened the scoring for his new team, giving the ICE a 1-0 lead with his first point of the season at the six minute mark of the first period, from Jonathan Smart and Valtteri Kakkonen.

Brett Kemp would tally his fifth of the season to even the score at 1-1 at 13:30, with Quinn Benjafield picking up the lone helper on the goal.

With the two teams playing 4-on-4 with offsetting penalties it was the ICE who capitalized, as Martin Bodak scored his first of the season to give the ICE a 2-1 lead at 16:43 from Peyton Krebs and Jaeger White.

Less than a minute later it was 3-1 Kootenay, as the teams remained four aside and the ICE broke into the offensive zone on a 4-on-1 opportunity. Cameron Hausinger buried his first goal to extend the hosts lead, from Cole Muir, to round out first period scoring at 17:37.

Just past the midway point of the second period the Oil Kings found themselves with a 5-on-3 man advantage and they would make it count, as Conner McDonald notched his second of the season, from Jake Neighbours and Trey Fix-Wolansky at 10:53 to cut the ICE lead to 3-2.

It was the lone goal of the second period, which saw even fewer offensive opportunities with the Oil Kings outshooting the ICE, 8-5, for a two-period total of 15-15.

The Oil Kings once again found themselves down a man – this time to start the third period – and White was able to pick up his second point of the night and first goal of the season, restoring the two-goal lead for Kootenay. Brett Davis and Krebs earned the assists on the power play goal at the 1:35 mark of the third.

Trailing 4-2, the Oil Kings corralled the puck in the offensive zone. Kootenay gained possession and attempted to clear but a heads-up play by Logan Dowhaniuk kept the puck inside the blue line. He cycled the puck to Andrei Pavlenko, who beat McGovern to cut the ICE lead to 4-3 with 9:26 to play.

Minutes after the Edmonton goal the ICE found themselves with another odd man rush, but a stunning, sprawling glove save by Bilous kept it a one-goal game.

Later in the frame with Bilous on the Edmonton bench in favour of an extra attacker, the Oil Kings did the improbable to the ire of the home town fans. A goal-mouth scramble ended in Benjafield’s second goal of the season, from McDonald and Vladimir Alistrov, with just five seconds left on the clock to tie the game, 4-4.

After a scoreless five minute, 3-on-3 overtime period, the teams headed to their first shootout of the season remaining tied, 4-4.

Kootenay finished the night going 1-for-4 on the power play, while Edmonton was 1-for-3 with the man advantage.

The Oil Kings continue their six-game road trip tomorrow night, Saturday, October 6 when they face the Spokane Chiefs at 8:05 PM (MT) [7:05 PM PT]. They return home to Rogers Place on Friday, October 19 when they host the Red Deer Rebels for a 7:00 PM MT start.