Oil Kings Fall to Blades, Drop First of the Season 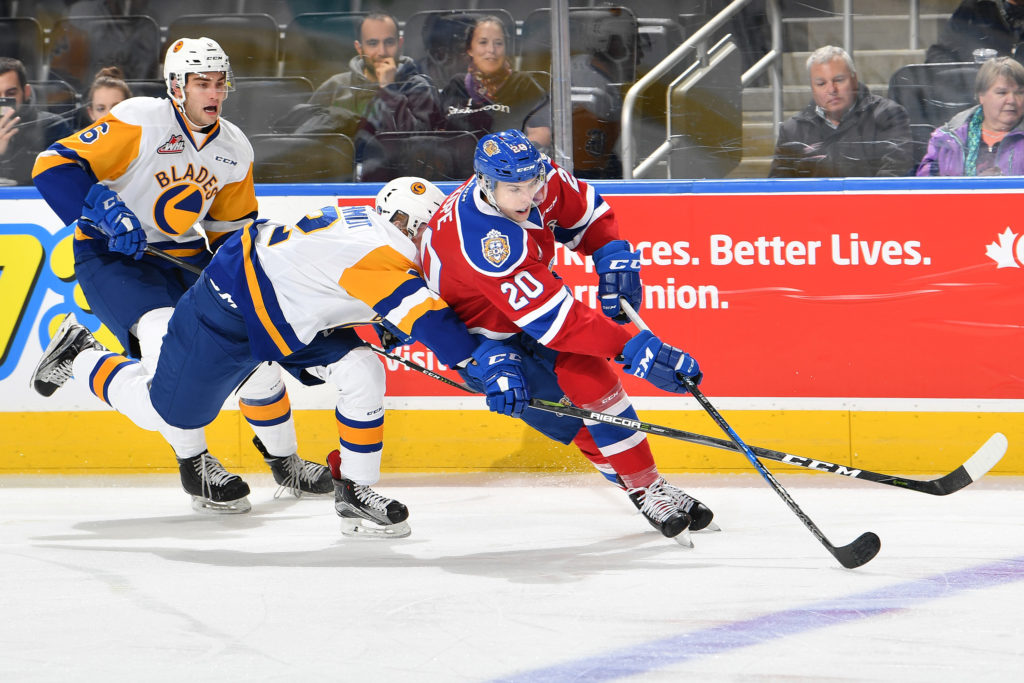 The Edmonton Oil Kings will embark on their six-game road trip looking to begin a brand new win streak.

The loss snaps a franchise-best five straight wins to start a season, the best mark by the team out of the gate in the team’s modern history. Dylan Myskiw (3-1-0-0) was saddled with his first loss of the season, turning aside 30 of 34 shots on goal.

Nolan Maier improved his record to 4-2-0-0, as the Blades snapped a mini two-game slump after beginning the season 3-0-0-0.

The lone goal of the first period came on the stick of the visitors, as Brandon Machado gave the Blades a 1-0 lead, unassisted, at 14:25. Shots on goal through the opening period were 13-11 in favour of Saskatoon.

Just past the midway point of the second period the Blades would not only take a 2-0 lead, but would do so while shorthanded as Eric Florchuk notched his second of the season. Dach earned the lone assist on the goal at the 10:40 mark.

Finally, the Oil Kings would get themselves on the board after a tic-tac-toe feed on the power play resulted in Trey Fix-Wolansky’s third goal of the season, from Vladimir Alistrov and Jacson Alexander, at 15:08 to cut the Saskatoon lead to 2-1 and wrap up second period scoring.

The Oil Kings looked to erase their deficit as the puck dropped on the third period, but instead it was the Blades who extended their lead, scoring a pair of goals just 1:24 apart.

Dawson Davidson sailed a shot from the point that found its way past Myskiw, from Logan Christensen and Riley McKay, at 2:12 to restore the Blades two-goal lead, 3-1, before Florchuk’s second of the game at 3:36 made it 4-1, from Dach and Emil Malysjev.

A highlight reel marker by Fix-Wolansky injected some life into his squad, as his between-the-legs, top-shelf snipe over the shoulder of Maier cut the Blades lead in half, 4-2, at 11:20 for his second goal of the game.

Wyatt McLeod tallied his first of the season, assisted by Jalen Luypen – his first WHL point – and Alistrov, to make it a one-goal game, 4-3, with 2:57 left to play.

But with 1:36 remaining and Myskiw on the bench in favour of an extra Oil Kings attacker, Dach registered his fourth goal of the season into the empty net from newly acquired Brandon Schuldhaus to secure the 5-3 final.

Saskatoon finished the night going 0-for-4 on the power play, while Edmonton was 1-for-4 with the man advantage.

Before puck drop, goaltender Boston Bilous was awarded the Blue Willow Restaurant/Vic Mah Trophy for Unsung Hero for the month of September.

Great seats are still available for all Edmonton Oil Kings home games during the 2018-19 season starting at just $20. VisitOilKings.cafor more information or to purchase.