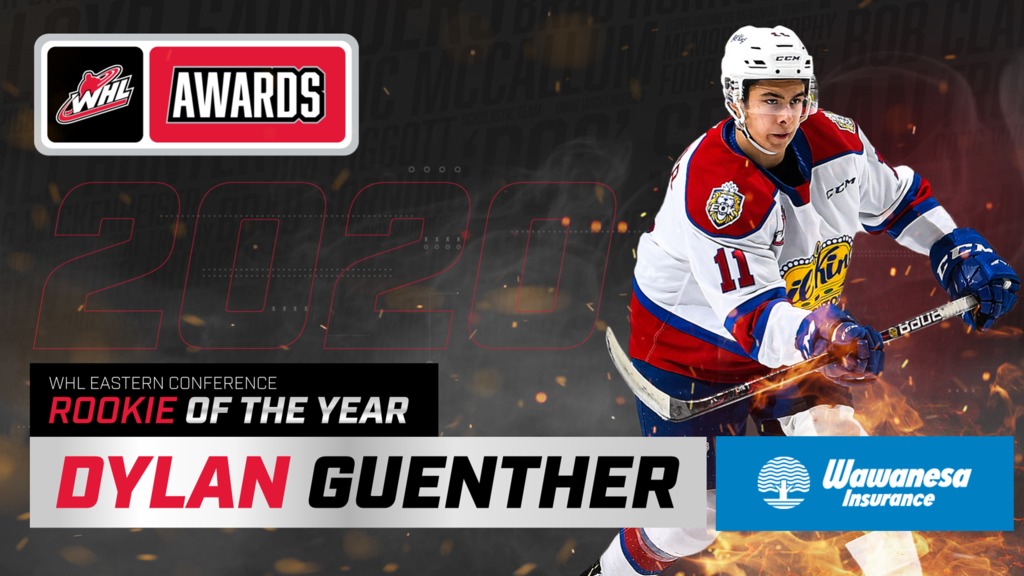 On April 16, 2020, the Western Hockey League announced Edmonton Oil Kings forward Dylan Guenther has been named the WHL Eastern Conference Rookie of the Year and nominee for the Jim Piggott Memorial Trophy (WHL Rookie of the Year) presented by Wawanesa Insurance.

The first-overall selection at the 2018 WHL Bantam Draft, Guenther excelled for his hometown Oil Kings throughout the 2019-20 WHL regular season. With the Oil Kings repeating as Central Division champions, Guenther recorded 59 points (26G, 33A) in 58 games, including eight power play goals and three game-winning goals. On the Oil Kings, Guenther led the team in goals, ranked fourth in assists, and was third overall in scoring.

Among WHL rookies, Guenther ranked third in goals, tied for second in assists, and was second in overall scoring. He was one of four WHL rookies to produce at better than a point-per-game pace throughout the regular season.

From January 17 to February 7, 2020, Guenther enjoyed an eight-game point streak where he recorded 11 points (4G, 7A). Guenther was named the WHL Rookie of the Month for February 2020.

WHL Eastern and Western Conference Rookies of the Year are voted upon annually by WHL General Managers and Head Coaches. The winner of the Jim Piggott Memorial Trophy for WHL Rookie of the Year will be announced on Friday, May 15.

The Jim Piggott Memorial Trophy is presented annually to the player whose performance in their first season is deemed to be the most outstanding among all rookies.