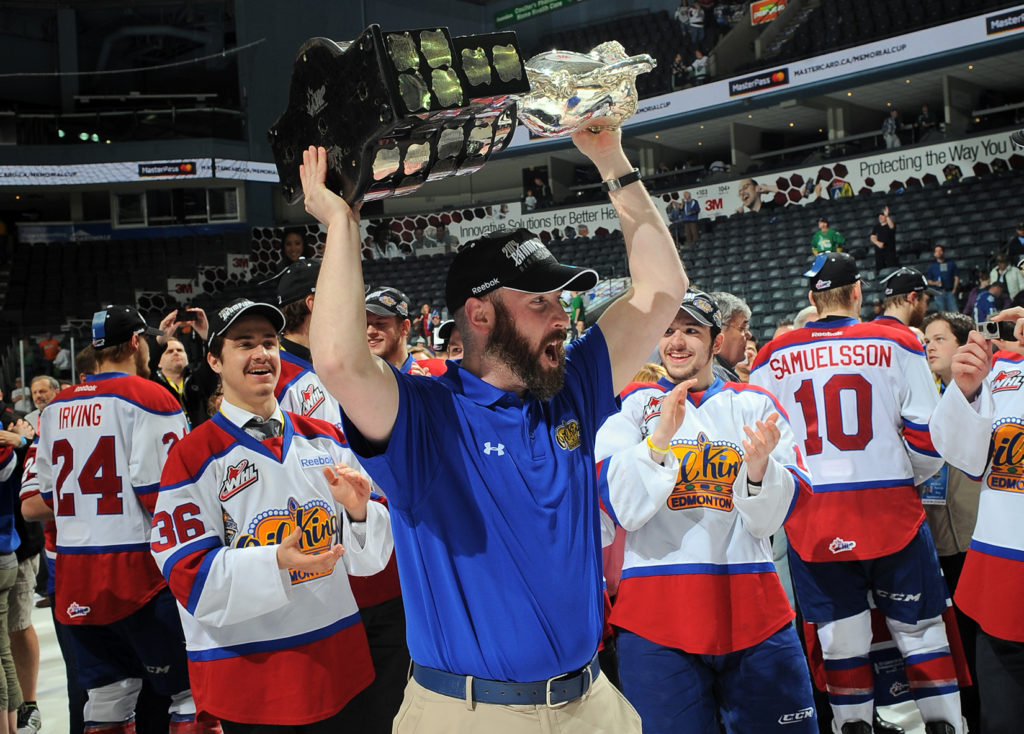 Edmonton, AB – The Edmonton Oil Kings announced today Head Athletic Therapist Brian Cheeseman will be leaving the organization after accepting a job with the Edmonton Football Team (CFL) as their Director of Sports Medicine and Rehabilitation.

Cheeseman, 40, began working with the Oil Kings during the 2010-11 season. In his time with the club, he worked more than 700 games, which included 95 playoff games and nine Memorial Cup games.

“I’ve been very fortunate to have been a part of a fantastic organization these last 11 years,” said Cheeseman. “To get to work in a professional and successful environment every day, I think has gone a long way for not only my development as an athletic therapist, but as a person.

“I’m very thankful for all the people who played a role in it, from management to coaches, players and obviously my co-worker and one of my best friends, Rogan Dean (Oil Kings Head Equipment Manager). None of this is possible without the support and help from those people.”

In his role with the Oil Kings, the Mount Pearl, Newfoundland and Labrador native was responsible for the prevention, assessment, treatment, documentation and rehabilitation of all player injuries, while also overseeing and monitoring the players off-ice workouts, nutrition, hydration, rest and recovery.

“He’s one of, if not, the best in our business,” said Oil Kings Head Coach Brad Lauer. “He was a huge part of our group. What he did for our players, whether it’s the medical side, getting workout programs together, or just being there for our players to give them someone to talk to about anything, was huge. It’s bittersweet to see him go, disappointed to lose him, but very excited for this new adventure he’s going into.”

Cheeseman leaves the organization with plenty of fond memories including being a two-time WHL champion (2012 and 2014) and a Memorial Cup champion (2014).

“The championship seasons and being a part of that run to three straight championship series against the same team in Portland, something we might never see again in our league or junior hockey for that matter, is definitely near the top of the list,” said Cheeseman. “But you know what, it’s the stuff that happens behind the scenes, the friendships and relationships you make with people along the way, watching a player come back from a long-term injury and scoring a goal or contributing in their first game back, those are things that you remember and cherish the most as an athletic therapist.”

During his time with the Oil Kings, Cheeseman also found success at the international level with Hockey Canada, serving as the Athletic Therapist for Team Canada at four IIHF World Junior Championships (2016-18 and 2020), winning two silver medals (2017 and 2020) and one gold medal (2018).

Prior to working the World Junior tournaments with Hockey Canada, he also served as an Athletic Therapist at the 2012 World U-17 Hockey Challenge for Team Pacific, as well as the 2013 Ivan Hlinka Memorial Tournament, where he would capture a gold medal with Team Canada.

He has also worked several CHL events including a pair of Top Prospects games (2014 and 2019) and the 2016 CIBC Canada/Russia Series.

“This is something that is well-deserved,” said Oil Kings Head Equipment Manager Rogan Dean on his longtime friend and co-worker. “He’s completed everything on the junior hockey bucket list and I can’t think of anyone else that deserves this opportunity more. I’m extremely happy for him and honestly it should have happened a lot sooner because he is so good at his job.”

Cheeseman also served as a leader amongst the WHL’s Athletic Therapists, sitting on many committees throughout his tenure in the league while also serving as the Oil Kings COVID-19 Compliance Officer during the 2020-21 season.

“Brian was fantastic for our organization these last 11 years,” said Oil Kings President of Hockey Operations and General Manager Kirt Hill. “From everything that he did for the team, the league committees and Hockey Canada, he went above and beyond with his role. Everything he did for the Oil Kings was second-to-none in the league and his commitment to our team is going to be strongly missed.

“We wish Brian nothing but the best with his exciting new role with the Edmonton Football Team and look forward to remaining good friends and keeping a strong relationship with all the staff here.”

Cheeseman is slated to begin his new role with the Edmonton Football Team next month.

“I’m incredibly honoured, excited and humbled to have this opportunity,” said Cheeseman. “It’s a new adventure for me in more ways than one, but one that I’m looking forward to taking on head first and hopefully some of these experiences I’ve been able to gain through my time with the Oil Kings, and junior hockey in general, will help that transition to football and a pro-sports environment happen smoothly.

“I think having had the opportunity to work for such a professional organization as the Oil Kings and be able to work in a professional environment like Rogers Place will make that transition easier.”

The entire Oil Kings organization wish Brian and his wife Adrienne the best of luck as they embark on this exciting new journey.