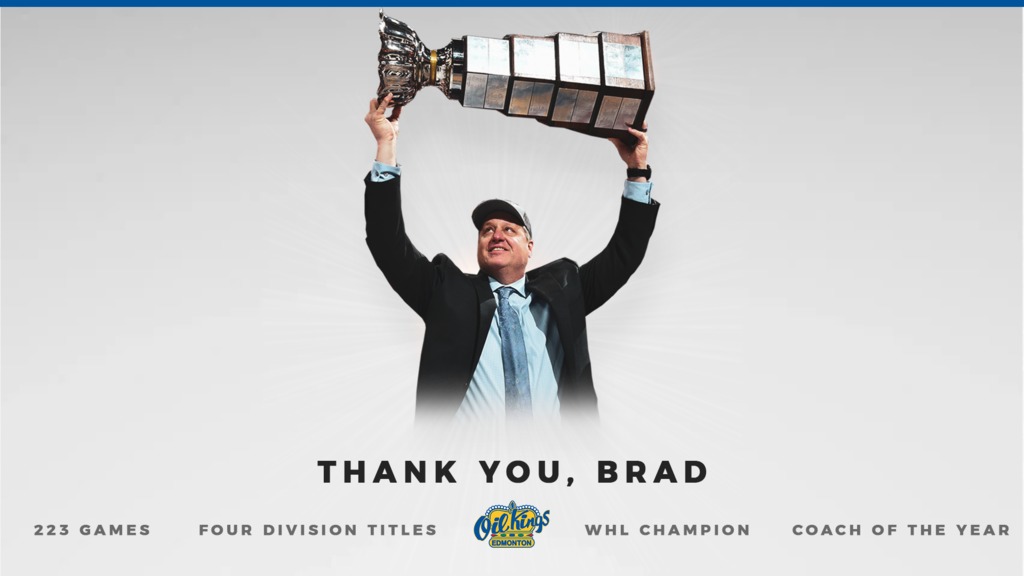 “The Edmonton Oil Kings organization is extremely proud of Brad and his new coaching opportunity with the Winnipeg Jets,” said Oil Kings President of Hockey Operations and General Manager Kirt Hill.  “Brad has done a tremendous job developing our players both on and off the ice for the next steps in their hockey careers.

“The impact Brad has had on our players is evident with the amount that have been drafted into the NHL and moved onto pro or University hockey. His leadership on the bench has led our group to a lot of success which was capped off with a WHL Championship”

Lauer, a Humboldt, SK product, leaves the Oil Kings following four successful seasons in which he helped guide the team to a record of 154-46-13-10 after being hired on June 27, 2018.

“There are a few factors that come in to a decision like this,” said Lauer.  “First, we thought it was a good fit and situation for my family and me.

“The other thing is, I think the Jets are a heck of a team, they’ve got great goaltending and great players throughout their lineup and it’s a really exciting opportunity to get to work with them.”

In Winnipeg, Lauer will reunite with newly named Jets Head Coach Rick Bowness, who he coached with in Tampa Bay from 2015 to 2018.

“Knowing Rick and working with him before was another big reason on why I decided to take this opportunity,” said Lauer.  “I know what his expectations are, the excitement he brings to the rink and the passion he has for the game.”

In Lauer’s first season behind the Oil Kings bench, the team had a 40-point improvement from the previous season and made it to the WHL’s Eastern Conference Championship series before falling to the eventual WHL Champion Prince Albert Raiders in six games.

Lauer and the Oil Kings were able to continue their momentum into the 2019-20 season where after 64 games, the team had a record of 42-12-6-3 and were sitting in first place in the Eastern Conference before the remainder of the regular season and playoffs were cancelled due to the Covid-19 Pandemic.

During the abbreviated 2020-21 season, the Oil Kings finished with the best record in the entire WHL after going 20-2-0-1 in the 23-game campaign.

In his final season behind the Oil Kings bench, Lauer helped lead the Oil Kings to their fourth 50-win season and third Ed Chynoweth Cup in franchise history.

During the 2022 WHL Playoffs, the Oil Kings swept their first two opponents, the Lethbridge Hurricanes and Red Deer Rebels, before defeating the Winnipeg ICE in five games to capture the franchises fourth Eastern Conference Championship.

In the WHL Championship Series, the Oil Kings knocked off the Western Conference Champion Seattle Thunderbirds in a hard-fought six game series to become 2022 WHL Champions and punch their ticket to the 2022 Memorial Cup in Saint John, New Brunswick.

“It’s gone by quick,” said Lauer on his four seasons behind the Oil Kings bench.  “The day we came in there were a lot of unknowns with the team coming off a couple tough seasons but we just worked together as a staff and found some great success.”

During Lauer’s tenure behind the Oil Kings bench, the team captured four consecutive Central Division Titles, both a Regular Season and Post-Season Eastern Conference Championship, and a WHL Championship.

Following the 2019-20 season, Lauer was named the WHL’s Coach of the Year, becoming the first Oil Kings coach in franchise history to win the Dunc McCallum Memorial Trophy.

“Our staff has been very fortunate to work with Brad,” added Hill.  “Often, we think a hockey coach influences the players alone, but the impact Brad has made on myself the staff is undeniable. It is a bittersweet day but we all couldn’t be happier for him and the opportunity to go back to the NHL. We wish the Lauer family nothing but the best moving forward.”

Prior to joining the Oil Kings, he spent a decade coaching at the professional level as an assistant coach with the Tampa Lightning (NHL), Anaheim Ducks (NHL), Syracuse Crunch (AHL), Ottawa Senators (NHL) and Milwaukee Admirals (AHL).

Before making the move to pro hockey, he spent five seasons as an assistant coach with the Kootenay Ice from 2002 to 2007.

“For me, coming back and working with young men in junior hockey was something I wanted to do for a long time and I’m very thankful the Oil Kings gave me that opportunity,” added Lauer.  “The first year was a lot of fun, I learned a lot as a coach that year and it was really rewarding to see the success we were able to find and to see it continue on to this past season winning the Championship.

“It’s unfortunate we weren’t able to finish the past two seasons (2019-20, 2020-21) because I think we could have added a few more championships but we’ve had four great years here and I can’t thank the Oil Kings and Oilers Entertainment Group enough for the opportunity.”

“When I was coming to Edmonton, I was hoping to create an NHL atmosphere amongst the staff and the players,” said Lauer on the staff he worked with over his tenure with the Oil Kings.  “And then you see the way Luke (Pierce), Rogan (Dean), and Cheese (Brian Cheeseman) conducted themselves and the way they treated the players so professionally, it was evident that the organization already had that.

“We were all on the same page right from day one and it made coming to the rink everyday really easy and enjoyable having such a cohesive and professional staff working for us.”

In 1985, he was drafted in the second round, 34th-overall, by the New York Islanders.  He would go on the play professional hockey for 16 seasons in the NHL, IHL, AHL and BISL.  He appeared in 323 NHL games and recorded 111 points (44G, 67A) with the New York Islanders, Chicago Blackhawks, Ottawa Senators and Pittsburgh Penguins.

The Oil Kings organization thank Brad and the entire Lauer family for their dedication to the team and community over the past four years and wish them the utmost success in the future.