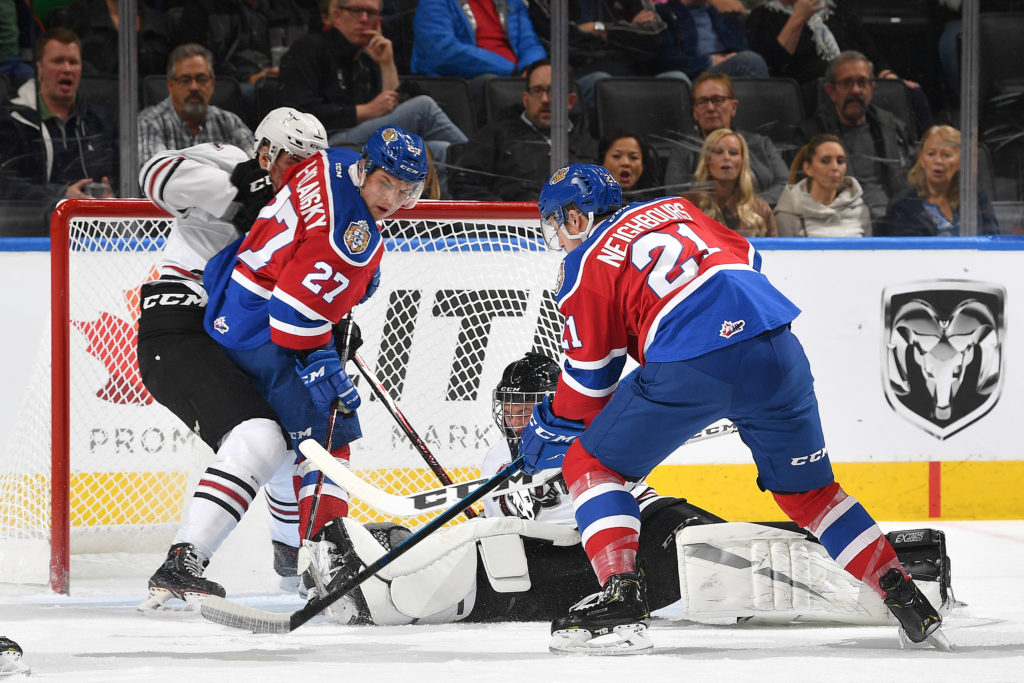 The Edmonton Oil Kings were looking forward to getting back to Rogers Place for a little bit of home cooking.

Unfortunately as it turns out, they’re still on a strict diet of humble pie.

The Oil Kings spotted the Red Deer Rebels a 2-0 lead just 1:08 into the game and were unable to ever close the gap, falling 5-2 in front of 6,125 fans at Rogers Place in their return from a six-game road trip on Friday night.

The Oil Kings’ (5-7-0-1) special teams improved compared to recent nights, but they were still haunted by allowing their opponents to jump out to an early lead.

The loss to Red Deer was their eighth straight loss (0-7-0-1), with the team surrendering the game’s first goal in all eight of those contests.

The Rebels (6-3-1-0) were led offensively by team leading scorer Brandon Hagel, who extended that lead with a four-goal performance; the first of his four-year WHL career.

Along with Hagel, Ethan Anders (5-3-1-0) had a major impact on the Rebels’ return to the win column, turning aside 41 of 43 shots by the Oil Kings.

The Rebels wasted little time as they took a 1-0 lead on the first shot of the game. Alex Morozoff tallied his first of the season, from Ethan Sakowich and Arshdeep Bains just 29 seconds in.

They kept the early pressure on the Oil Kings, extending their lead to 2-0 just 39 seconds later as Hagel scored his fifth of the campaign, assisted by Jeff de Wit, at 1:08.

But the Oil Kings managed to mitigate the early damage, as Jake Neighbours drew a penalty in the offensive zone, then capitalized on the ensuing power play.

Left all alone in the slot, Neighbours was stopped not once, but twice by Anders before Neighbours’ third attempt beat the netminder to cut the lead in half, 2-1, from Vince Loschiavo and Trey Fix-Wolansky at 7:37 to wrap up first period scoring. 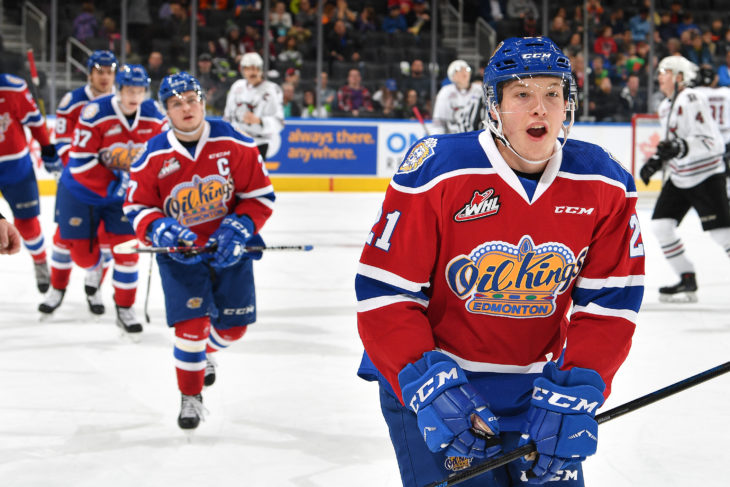 Shots on goal to start the period were 6-0 Red Deer, but shifted in Edmonton’s favour by the end of the opening 20 minutes, 20-12.

The Rebels managed to kill off the remainder of a late penalty called at the end of the first period, then followed that up by restoring their two-goal lead as Hagel potted his second of the night, unassisted, to make it 3-1 at 1:16 of the second.

Fix-Wolansky notched his seventh goal of the season to make it 3-2 as he fired a shot from just inside the point that sailed over the shoulder of Anders. The goal came just 10 seconds into an Oil Kings power play as the Rebels were off for holding, with Neighbours and Loschiavo picking up the assists at 7:15.

But less than a minute later it was 4-2 Red Deer as Hagel completed the hat trick with his seventh of the season, from Sakowich, at 8:04.

That was how the second period would end, as the Oil Kings found themselves down a pair of goals despite capitalizing twice on five power play opportunities and outshooting the Rebels, 32-20, through 40 minutes.

Hagel capped off his four-goal performance at 7:25 of the third period, from Oleg Zaytsev, to round out the 5-2 game.

Red Deer finished the night going 0-for-2 on the power play, while Edmonton was 2-for-5 with the man advantage.

The Oil Kings play their second game of the weekend on home ice when they host the Kootenay ICE at Rogers Place on Sunday, October 21 at 4:00 PM MT.