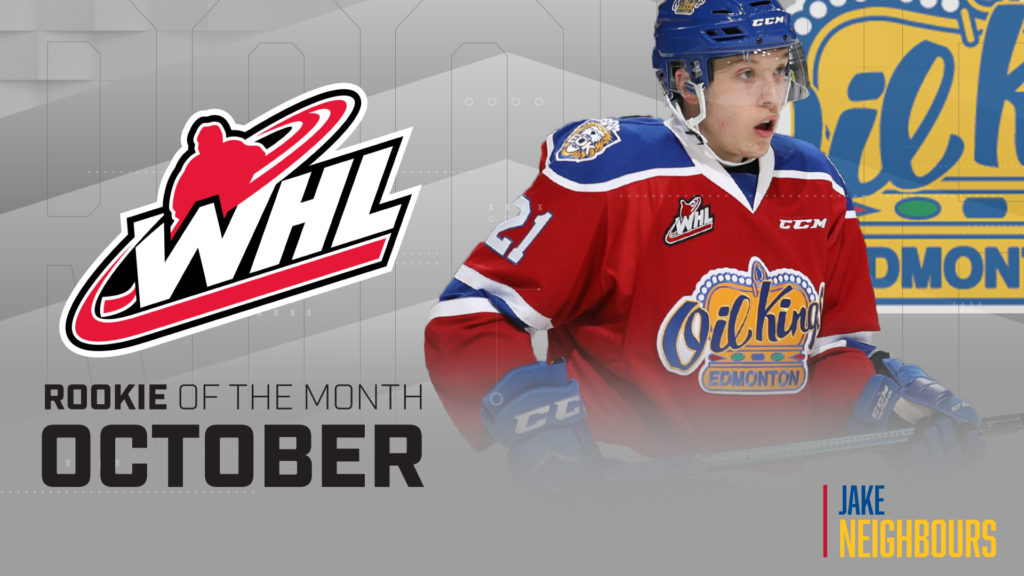 The Western Hockey League announced today Edmonton Oil Kings forward Jake Neighbours has been named the WHL Rookie of the Month for September and October, 2018.

Neighbours recorded 14 points (5G, 9A) in 17 games as the Oil Kings surged up the standings to sit second in the Central Division and fourth in the WHL’s Eastern Conference. His performances included three multi-point games, including the first three-point game of his WHL career.

The month included scoring his first WHL career goal in a 6-3 win against the Calgary Hitmen, followed by becoming the fourth first-round selection from the 2017 WHL Bantam Draft to record a multi-goal game as he notched the game-winning goal against the Lethbridge Hurricanes on October 28.

Neighbours was twice recognized as Third Star in a game and recognized once as Second Star. Neighbours has scored a pair of power play goals to compliment his strong start to the 2018-19 WHL regular season.

Neighbours was a champion at the 2017 Alberta Cup and won a silver medal at the 2017 WHL Cup.

The Oil Kings are back in action on Friday, November 2 at 7:00 PM MT when they kick-off a six-game road trip against the Regina Pats.