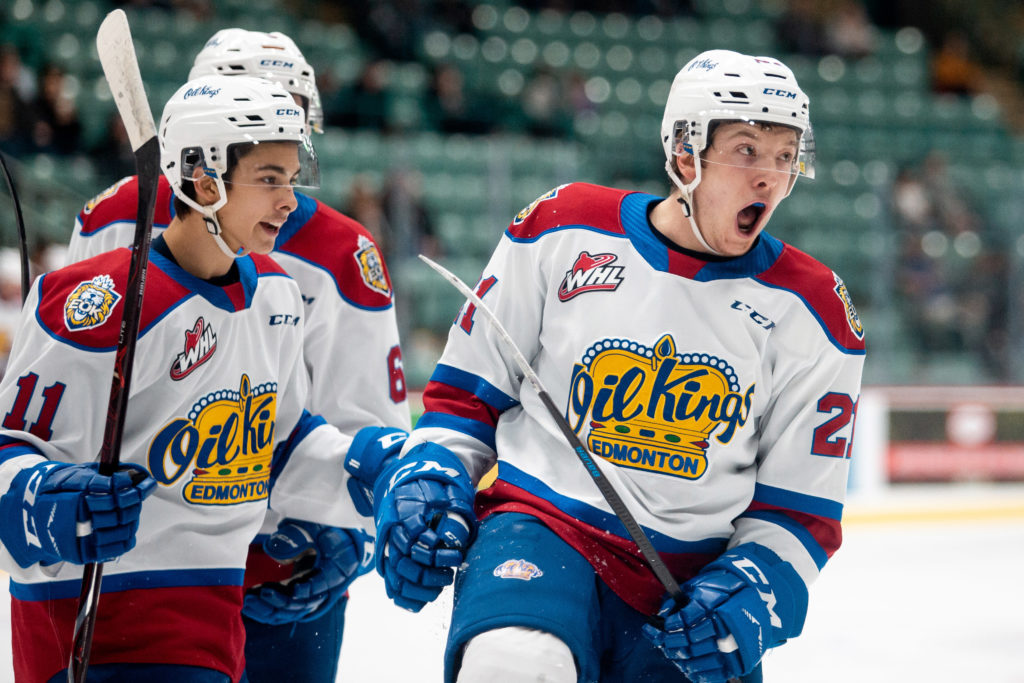 The five-game western road trip through British Columbia got off to exactly the start the Edmonton Oil Kings wanted on Tuesday night.

Jake Neighbours, David Kope and Matthew Robertson helped lead the Oil Kings to their first regulation victory in their last four games, following a 5-4 shootout loss to the Brandon Wheat Kings on Sunday, and regulation losses to the Tri-City Americans and Medicine Hat Tigers and Tri-City Americans on Monday and Saturday of last week, respectively.

Sebastian Cossa (6-1-0-1) also did his part to help guide the team to victory in his return to the Oil Kings crease, turning aside 22 of 24 shots he faced.

The Oil Kings got on the board first with a goal from Neighbours – his fifth of the season – after swiping at the puck while falling through mid-air at the hash marks, assisted by Dylan Guenther, at 16:21 of the first period.

It was the lone goal of the opening frame, which saw Edmonton outshoot Prince George, 18-7.

In the second the Cougars tied the game early, just 2:16 in, before taking a 2-1 lead at the 11:11 mark after forcing a turnover, then emerging into the Oil Kings zone and capitalizing on a 3-on-1.

But that lead was short-lived as Kope tallied his sixth of the year just 57 seconds later, beating Gauthier glove-side for a 3-2 Edmonton lead, assisted by Vladimir Alistrov and Ethan Cap.

Before the period was out a blueline blast boosted the visitors lead, as Robertson fired a wrist-shot from near the top of the left circle for his fifth of the campaign, from Josh Williams and Guenther, with 3:15 on the clock to round out scoring in the middle frame.

Scoring chances presented themselves to both sides during the third but escalated at the 6:10 mark when Neighbours was awarded a penalty shot, but was denied by Gauthier.

The Oil Kings, however, would maintain their lead through the remainder of regulation and hand the Cougars their eighth straight defeat.

Final shots on goal were 36-24, Edmonton, after an 11-6 margin in favour of the Oil Kings in the third period.

Prince George was 0-for-5 on the power play while Edmonton went 0-for-4 with the man advantage.

The Oil Kings continue their five-game road trip through BC in Victoria when they face the Royals on Friday, November 22 at 8:05 PM MT, before meeting the Vancouver Giants the very next evening, Saturday, November 23 at 8:00 PM MT.