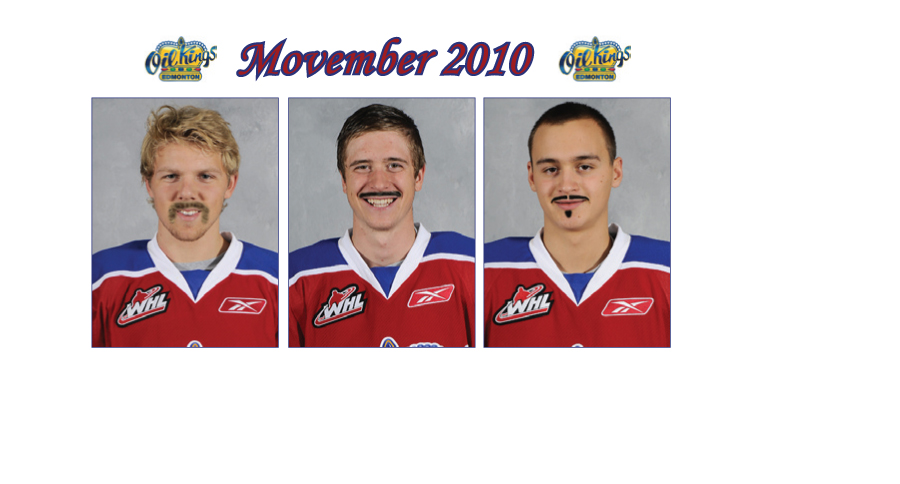 Edmonton, AB – The Edmonton Oil Kings have joined the fight against prostate cancer and are committed to promoting men’s health awareness, as the team is now officially part of the 2010 Movember campaign.

Movember challenges men to change their appearance and the face of men’s health by growing a moustache. The rules of the campaign are simple — start the month of November clean-shaven and then grow a moustache for the entire month.

The moustache becomes the ribbon for men’s health, the means by which awareness and funds are raised for prostate cancer. Much like the commitment to run or walk for charity, the men of Movember commit to growing a moustache for 30 days.

For the second year in a row, Oil Kings players and staff members have committed to growing moustaches as part of the Movember campaign. The team is also raising men’s health awareness and collecting donations to go towards prostate cancer research.

“We’re really excited to come together as a team and take part in Movember,” said Oil Kings fourth-year defenceman and assistant captain Adrian Van de Mosselaer, who had his beard shaved, along with fellow veteran Cam Abney, on Nov. 1 by staff from The Mensroom to launch the 2010 campaign. “It’s a lot of fun and a good team building activity for us to grow moustaches, while also supporting a great cause like men’s health and prostate cancer research.”

For more information about supporting the 2010 Movember campaign, check out the Oil Kings “Mo Space” profile by clicking on the link below:

The Oil Kings are also hosting a night dedicated to the 2010 Movember campaign on Saturday, November 20, when they return home from a six-game road trip to host the Red Deer Rebels at 7 p.m. at Rexall Place. There will be Oil Kings Movember T-shirts for sale, and it’s also Free Cowbell Night, as well as Minor Hockey Night.