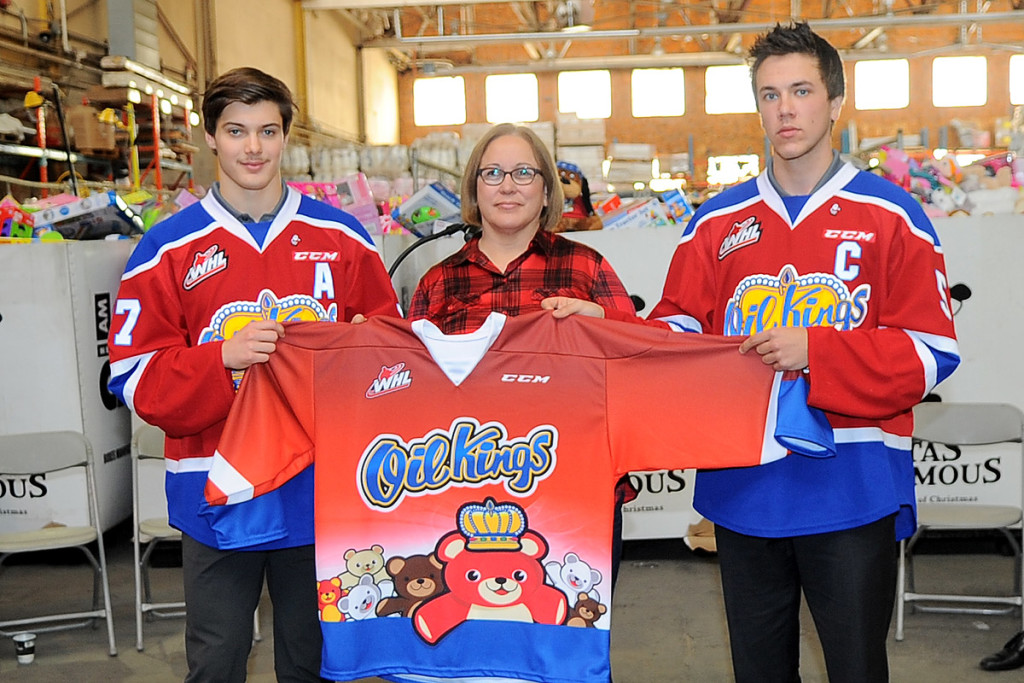 EDMONTON, ALTA. – The countdown to the biggest game of the Edmonton Oil Kings regular season is on as the Oil Kings, in partnership with 630 CHED Santas Anonymous, launched the eighth annual Teddy Bear Toss presented by Devon Energy, Global Edmonton, SHAW TV and 630 CHED on Saturday.The annual event, which has brought over 10,000 fans to Rexall Place each of the past three seasons, sees those fans fling new stuffed animals onto the ice after the Oil Kings score their first goal of the game, with all proceeds being donated to 630 CHED Santas Anonymous to be gifted to children in the Edmonton area. This year’s game will take place Dec. 6 against the Moose Jaw Warriors.

“It’s really cool to be out there as 10,000 bears come flying down around you,” said Oil Kings captain Ashton Sautner. “It’s definitely one of the highlights of our season.”“The partnership between 630 CHED Santas Anonymous and the Edmonton Oil Kings is unique and fun for both organizations,” said Lana Nordlund, executive director of 630 CHED Santas Anonymous. “Our volunteers really look forward to selecting the perfect stuffed animal to compliment a child’s toy.”Also included in the partnership for the first time is Devon Canada, presenting sponsor of the game, who have come on board to help the event continue to grow.“We’re excited to help give Edmonton children a brighter Christmas through Santas Anonymous,” said Nadine Barber, vice-president of Public Affairs for Devon Canada. “Being a good neighbour is one of Devon’s core values, and the Teddy Bear Toss exemplifies that: thousands of hockey fans coming together to make sure everyone has a good holiday season. It’s a great family event that our employees love attending, and we are thrilled to be a part of it.”In 2013, 10,058 fans tossed 10,128 bears on to the ice, the first time in the event’s history that more bears have been donated than fans in attendance.“Last year was a great success. People understood that it’s not just about coming to the game; you also need to bring a teddy bear,” said Kevin Radomski, director of business operations for the Oil Kings. “Now they need to bring two, bring three, bring four. At the end of the day, it’s all about putting as many smiles on as many faces as we can.”The Oil Kings will also wear specialty jerseys to mark the occasion, which will be auctioned off after the game with the proceeds also going to 630 CHED Santas Anonymous. Last year, the jersey auction raised $19,675.“When you add to the stuffed animals the proceeds from the 50/50, Chuck-A-Puck and jersey auction, the Teddy Bear Toss is one of the top annual events for 630 CHED Santas Anonymous. The awareness about the program is invaluable,” Nordlund said.“It’s a great cause to be associated with,” Sautner added. “Anytime you can help make a child’s Christmas better, that’s a special thing to be a part of.”Over the past seven seasons, 37,727 bears have been thrown on the ice at Rexall Place, and the night has become one of the most anticipated on the Oil Kings calendar. Tickets for the Dec. 6 game are on sale now at oilkings.ca, the Rexall Place box office of any Ticketmaster location, with seats available for under $20.