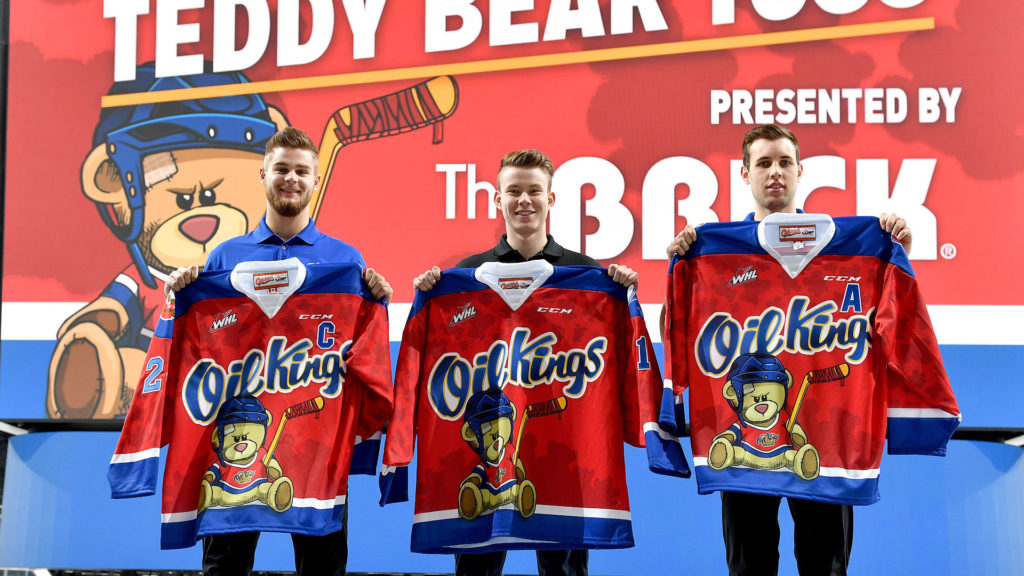 The Edmonton Oil Kings unveiled the jerseys they will be wearing when literally thousands of stuffed bears will fly over the glass at Rogers Place at the launch of the team’s 10th Annual Teddy Bear Toss presented by The Brick.

The Teddy Bear Toss has become the annual highlight of the Oil Kings schedule as fans bring stuffed animals to the game and shower the ice with them after the Oil Kings first goal of the game. All the bears are then donated to 630 CHED Santas Anonymous and gifted to children in the Edmonton area. This year’s game, which is sold out, will take place December 10 against the Kamloops Blazers. Doors at Rogers Place will open at a special time of 5:30 PM, which is 90 minutes prior to puck drop.

“As all of our fans are getting ready to celebrate this holiday season, this meaningful game helps us to give to those in need,” said Oil Kings Director of Business Operations Kevin Radomski. “Our team prides itself in being active in the community and we have the greatest fans out there. Their generosity will help us make Christmas brighter for those in need.”

The Oil Kings will be wearing their special Teddy Bear Toss jerseys to mark the occasion, which will be auctioned off during and after the game with proceeds going to 630 CHED Santas Anonymous. There will be a silent auction and raffle going throughout the game as well as a live auction right after the game. Last year the jersey auctions raised nearly $20,000.

“Two things that will guarantee to bring a smile to anyone’s face is the mention of Christmas or teddy bears,” said Executive Director of Sanatas Anonymous Lana Nordlund. “Put those together with the Oil Kings Teddy Bear Toss and you have magic! We are so honoured to be a part of this special night.”

The Oil Kings are also pleased to welcome back The Brick as the presenting sponsor and they will also have their Brickley bears available for sale on the concourse on December 10.

“The Brick is excited to partner for the second year with the Edmonton Oil Kings Teddy Bear Toss,” said Dave Freeman, President of The Brick. “Giving back to the communities where our team members live and work is important to The Brick. Our friend Brickley Bear is dedicated to the Brick’s campaign of ‘Helping to Improve the Lives of Children, Brick by Brick’ in support of 13 children’s hospitals across Canada and more specifically, the Stollery in Edmonton. Proceeds from the sales of the limited edition Brickley, sporting the Oil Kings Teddy Bear Toss jersey, will directly support the Stollery Children’s Hospital Foundation. The bears themselves will go to 630 CHED Santas Anonymous, putting smiles on thousands of children’s faces. It’s a win/win.”

Tyler Robertson, who scored the first goal last year bringing down a rain of teddy bears, said he and his teammates always look forward to this event.

“These bears go to kids that aren’t able to get that Christmas experience that other families are fortunate to have” he said. “The holidays are a great time for all of us to come together and make sure everyone enjoys the season.”

“The challenge is clear. With the game being sold out, we are hopeful that people bring multiple bears to the game so that we can help even more families and kids in need in our very own community.”