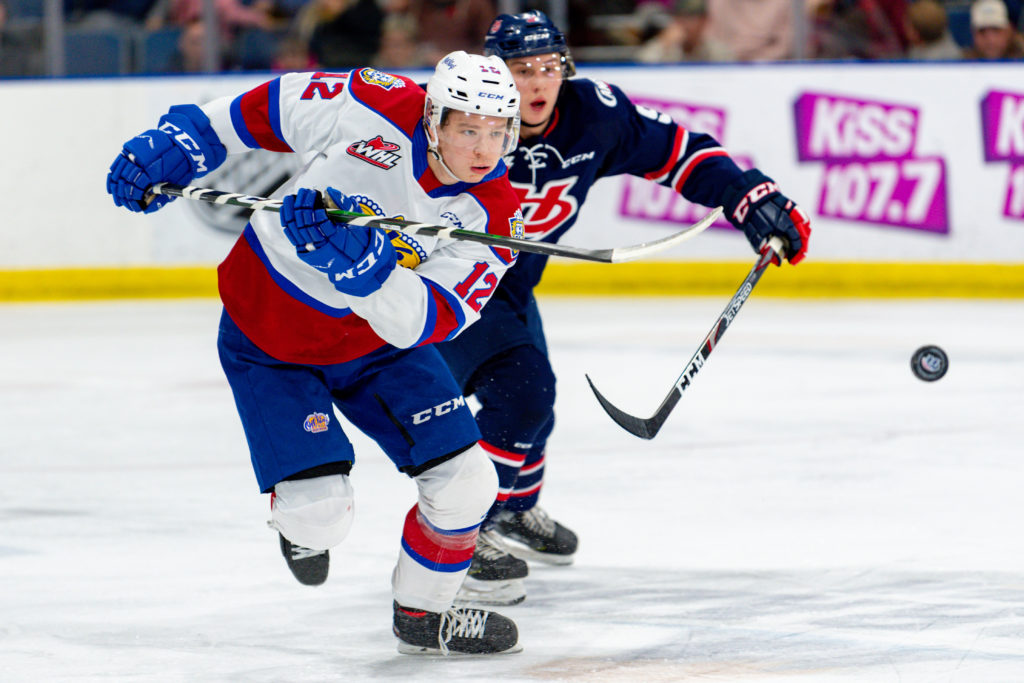 The Edmonton Oil Kings have enjoyed a number of exhilarating comebacks to start their young Western Hockey League season, but tonight, they learned what it felt like to be on the other side of a spirited rally.

The Oil Kings lead was built with two of those three goals coming by way of the power play, as the team looked poised for a solid road result with less than seven minutes left to play in the second period.

But the home side chipped away with three third period goals – two of their own with the man advantage – before completing the comeback via the final skater in what was a four-round shootout.

Sebastian Cossa (5-0-0-1) surrendered the single goal by the Hurricanes after the goal was reviewed at length by on-ice officials as to whether or not it crossed the line before the net was knocked off its moorings. His performance on the night, though, was once again impressive as the 16-year-old made all 17 saves asked of him through the first 40 minutes before seeing 21 shots in the third period alone.

Carl Tetachuk earned the win, making 32 of 35 saves for the Hurricanes.

Oil Kings captain Scott Atkinson opened the game’s scoring at 6:18 of the first period while on the power play, one-timing a pass from Carter Souch at the edge of the blue paint to take a 1-0 lead, with Jacson Alexander picking up the secondary assist.

In the final minute of the opening frame, Liam Keeler gained possession and divided the Hurricanes skaters in the offensive zone then beat Tetachuk, glove-side to make it 2-0, Edmonton. Wyatt McLeod and Matthew Robertson earned the assists on the goal at 19:32, which rounded out first period scoring.

Shots on goal in the opening 20 minutes were an 11-11 stalemate.

In the second, the Oil Kings added to their lead with another power play marker as Robertson dealt a heads-up feed to Riley Sawchuk who one-timed a bulls-eye of his own, increasing his team lead in goals (10) to make it a 3-0 game at 13:03. Jake Neighbours owned the second assist on the play, which sent the game to the second intermission.

Shots in the second period favoured the Oil Kings, 14-6, but the third period saw the Hurricanes’ storm surge, beginning with a power play goal at 5:26 to cut the lead to 3-1, Edmonton.

Just past the midway point of the period Oil Kings forward Souch was awarded a penalty shot after being hauled down deep in the Lethbridge zone, but despite his stickhandling efforts was unable to restore the visitors three-goal lead, as he was denied by Tetachuk.

With under five minutes remaining the Hurricanes notched their second power play goal of the night, as Dylan Cozens brought Lethbridge to within one, 3-2, at 16:20.

With 1:32 remaining in regulation, the Hurricanes pulled Tetachuk in favour of an extra attacker in an attempt to tie the game, and with 27 seconds left they did just that.

Alex Cotton’s fifth goal of the season sent the game to overtime, which would cap off a final 20 minutes that saw Lethbridge complete their comeback and, in turn, outshoot Edmonton by a 21-6 margin.

A back and forth, 3-on-3 extra frame solved nothing, so the game headed to a shootout with the Oil Kings shooting first.

Lethbridge was 2-for-5 on the power play while Edmonton went 2-for-4 with the man advantage.

The Oil Kings are back in action tomorrow night, Saturday, November 9 at Rogers Place when they host the Calgary Hitmen for their annual Star Wars Night at 7:00 PM MT.

Various Star Wars characters will be in attendance to interact with fans, both during the game and between 5:00 PM – 5:45 PM for those who wish to visit Studio 99, which will be opened for Saturday’s game. There will also be a first intermission light saber duel, and a silent auction for the Oil Kings R2D2-inspired specialty jerseys which will be worn in-game. The silent action takes place inside the main gates at Ford Hall and begins when doors open (6:00 PM) until the end of the second intermission.