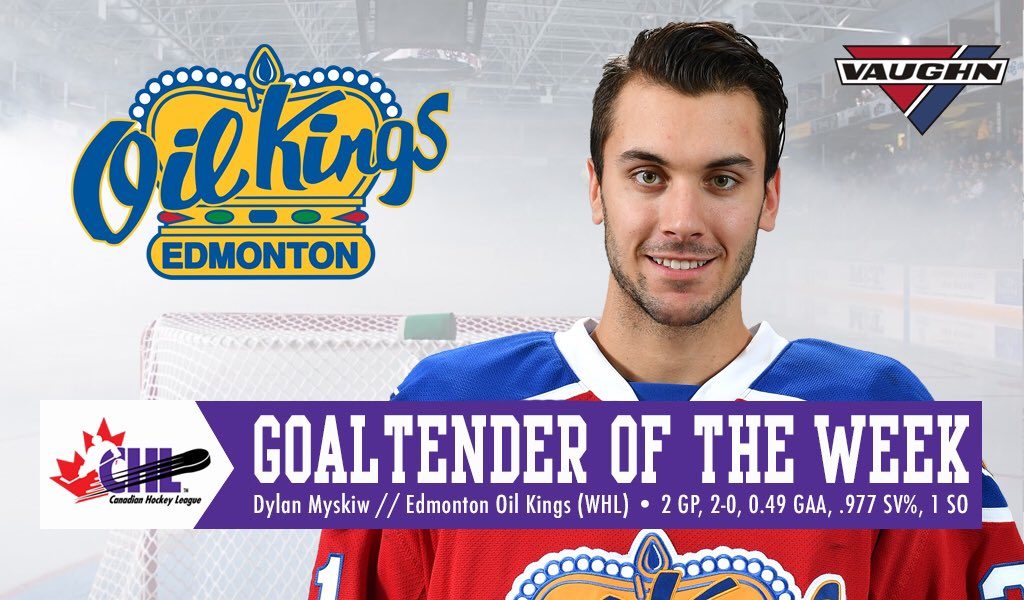 The Canadian Hockey League today announced that Dylan Myskiw of the Edmonton Oil Kings is the Vaughn CHL Goaltender of the Week for the fourth week of playoff action ending April 14 with a 2-0 record, including one shutout, a goals-against average of 0.49, and save percentage of .977.

Myskiw claims the honour for the first time this year after stopping 42 shots over two WHL playoff appearances, including Games 3 and 4 versus the rival Calgary Hitmen en route to a series sweep. The product of Winnipeg, Manitoba began the week with a 2-1 overtime victory in which he turned aside 24 shots and was named the game’s First Star. He then sealed the series in Game 4 as he turned aside 18 shots to record his first career playoff shutout.

Also considered for the award this week was Boston Bruins prospect Kyle Keyser of the Oshawa Generals, who came away with a perfect 3-0 record versus the Niagara IceDogs as he posted a 1.67 goals-against average and .952 save percentage to lead his club to a series victory in Game 6. In the QMJHL, Sherbrooke Phoenix netminder Dakota Lund-Cornish won one of his three appearances, but was named one of the game’s three stars in each appearance against the Drummondville Voltigeurs as he posted a goals-against average of 2.33 and save percentage of .937.

A day earlier on Monday, the Western Hockey League named Myskiw the WHL Eli Wilson Goaltending Goaltender of the Week. It was the second straight week the 20-year-old netminder earned the award, and third time overall this season.

Myskiw and the Oil Kings will be back in action for Games 1 and 2 of the WHL’s Eastern Conference Championship against the Prince Albert Raiders on Friday, April 19 (7:00 PM MT) and Saturday, April 20 (7:00 PM MT) at the Art Hauser Centre.

The series will shift to Rogers Place for Games 3 and 4 on Tuesday, April 23 and Wednesday, April 24, respectively, each for a 7:00 PM MT start. Tickets to Game 3 and Game 4 are on sale now.