MENU
THE WESTERN HOCKEY LEAGUE HAS ANNOUNCED ITS RETURN TO PLAY PROTOCOL FOR THE 2020-21 SEASON
February 26, 2019 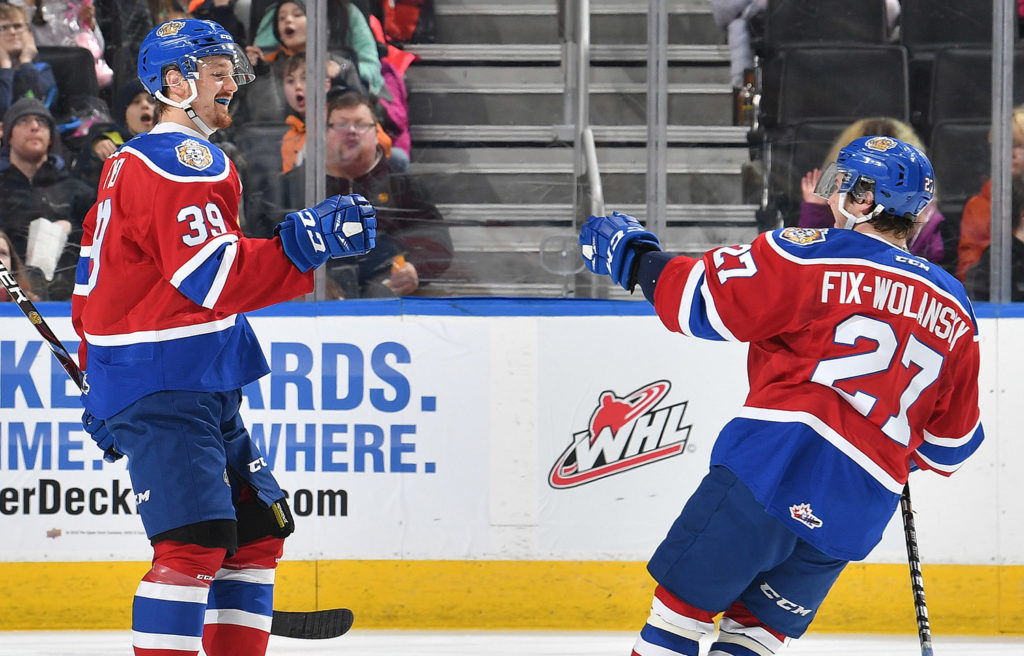 The Edmonton Oil Kings did their homework and were fully prepared for Hockey Hooky.

Scott Atkinson, David Kope and Andrew Fyten each scored twice and a total of eight Oil Kings had multi-point efforts as Edmonton trounced the Swift Current Broncos, 11-1, in front of 13,186 fans at Rogers Place during Tuesday’s 11:00 AM MT start.

Todd Scott (9-3-2-0) stayed sharp despite giving up the first goal of the game before only being called upon to stop 16 shots for the remaining 52-plus minutes.

Isaac Poulter (2-17-1-0) started the game for the Broncos but was pulled in the first period after surrendering three Oil Kings goals. Riley Lamb came on in relief and allowed three, but left the game just past the midway point of the second period due to injury. Poulter returned to the blue paint and was tagged for five more goals, while making a total of 15 saves.

The Oil Kings extend their lead in the Central Division to 78 points (61 GP), with the Lethbridge Hurricanes (74 points, 59 GP) facing off against the Saskatoon Blades tonight at 6:00 PM MT.

Edmonton’s Magic Number to clinch a playoff berth is now down to three. The Brandon Wheat Kings – who currently hold the final Wild Card spot and are idle on Tuesday – could finish as high as 38 wins and 83 points. Even if the Wheat Kings ran the gamut and won their nine remaining games, the Oil Kings would clinch a playoff berth with three wins (38 wins, 84 points).

With the goal, Fix-Wolansky moved into a tie with Dylan Wruck (2012-13) for fifth all-time in regular season goals (87) in Oil Kings modern franchise history.

McDonald’s trio of assists inched him ever-closer to the century mark in career regular season points with 99.

Just over three minutes into the game the Broncos took a 1-0 lead, as an innocent looking play turned into a miscue in front of the Oil Kings goal at 3:14.

But from there on out it was all Edmonton, as they piled on four unanswered goals to take a 4-1 lead into the first intermission.

Just three minutes after Swift Current took the lead Kope tied things up for the home side on the power play, making it a 1-1 game with his 12th of the season assisted by Fyten and Fix-Wolansky, at 6:20.

Fyten’s first of the night gave the Oil Kings the lead, 2-1, from Fix-Wolansky andMcDonald at 13:10.

Just 38 seconds later it was 3-1 Edmonton on Jake Neighbours ninth of the season – unassisted – at 13:48, which saw Poulter pulled in place of Lamb. Then Alistrov earned his first point of the day with a beautiful, highlight reel effort to extend the lead to 4-1, from McDonald, at 18:53.

Shots on goal in the first period of play favoured Edmonton, 13-7.

In the second, two more power play goals helped increase the Oil Kings lead, starting with Fyten’s second goal of the game and third point, from Alistrov and McDonald at 6:54 to make it 5-1.

It was 6-1 after Josh Williams buried his 13th of the campaign, from Matthew Robertson and Quinn Benjafield, at 9:04.

Broncos goaltender Lamb would have to leave the game due to injury at the 10:52 mark of the second period, so Poulter returned to the crease.

Second period scoring rounded out with Kope’s second of the game, a tip-in from the blue paint off a Gavlas shot from the near corner. Fyten earned the second helper on the goal at 18:55. Edmonton outshot Swift Current 16-6 in the middle frame for a two-period total of 29-13, Oil Kings.

Vince Loschiavo registered his 29th of the season at the 4:38 mark of the third period, from Ethan Cap, to make it 8-1 Edmonton.

The Oil Kings weren’t done there, as they peppered three more goals past the Swift Current goaltender in a span of 3:54 towards the latter half of the period.

Atkinson tallied his 11th of the season, from Alistrov and Pavlenko, at 14:07 to make it a 9-1 game, then just 53 seconds later Fix-Wolansky potted his 31st of the campaign, assisted by Kope and Robertson, at 15:00 to reach double-digits, 10-1.

Atkinson’s second of the game with 2:09 remaining capped off the high-scoring affair for the Oil Kings and make it 11-1, shorthanded, with the lone assist to Gavlas.

Final shots on goal were 38-17 Oil Kings, including 9-4 Edmonton in the third period.

Swift Current was 0-for-2 on the power play, while Edmonton finished the game going 3-for-5 with the man advantage and one shorthanded goal.