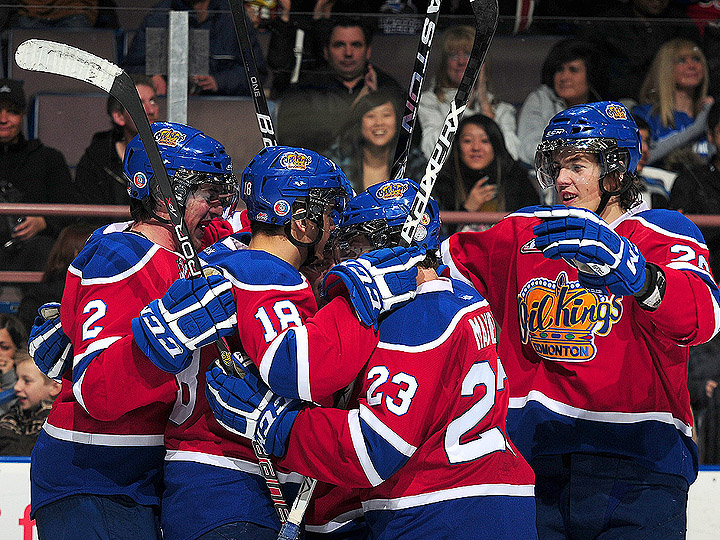 Edmonton, AB – Michael St. Croix had a four point night with two goals and two assists in the Oil Kings 5-2 win over the visiting Lethbridge Hurricanes on Saturday night in Edmonton. Newly aqcuired Tyler Maxwell got things started early on as he scooped a rebound off a shot from Martin Gernat to notch his 12th goal of the season and first in an Oil Kings jersey. Maxwell was acquired on Thursday from the Everett SilverTips and has already flourished on a line with St. Croix and sparkplug Dylan Wruck. Lethbridge would not back down and answered back with an equalizer in the second to make it 1-1 going into the third.

But the Oil Kings finally broke things open in the third as 2:55 into the period Wruck tee’d up a deflection off a blocked shot and slammed home his 6th of the season to make it a 2-1 game. The “Wrucking Ball” has caught some mid season momentum and has posted ten points in his last five games. Just two minutes later St.Croix showed off his release as he took the puck to the top of the slot and wired home a top corner shot for his 12th of the season. Not to be out done, just under two minutes later St.Croix managed to dig the puck out of a collapsing Canes defense and feed the puck out front to Maxwell who wired it through the dogpile in front of the net for his second of the night and team leading 13th goal to make it 4-1 Oil Kings with 13:20 to play.

Lethbridge would call a time out and then show some push back after the break as Canes Captain Cam Braes made it a 4-2 game near the midway point of the period. But Edmonton’s fifth ranked penalty kill went to work shutting down some late chances for Lethbridge and allowing for an empty net goal from St.Croix to complete his big night. St. Croix and Maxwell now share the team lead with 13 goals a piece while their line combined for all five tallies as Wruck finished with a goal and two assists to add to Maxwell’s pair. St.Croix, a draft pick of the New York Rangers capped had a monster week – posting six goals, five assists and a plus-8 +/- rating in his last three games.

Rookie goaltender Tristan Jarry made 25 saves on the night to notch his second win of the season, the Oil Kings record goes to 15-8-1-2 as they move into second place in the WHL Central division. The Oil Kings will now continue with the third in their run of 11 straight games at home this Tuesday as they take on the Spokane Chiefs. Puck Drop is set for 7PM MST at Rexall Place – all games this season will be broadcast live on the TEAM 1260 and streamed live at WHL.ca