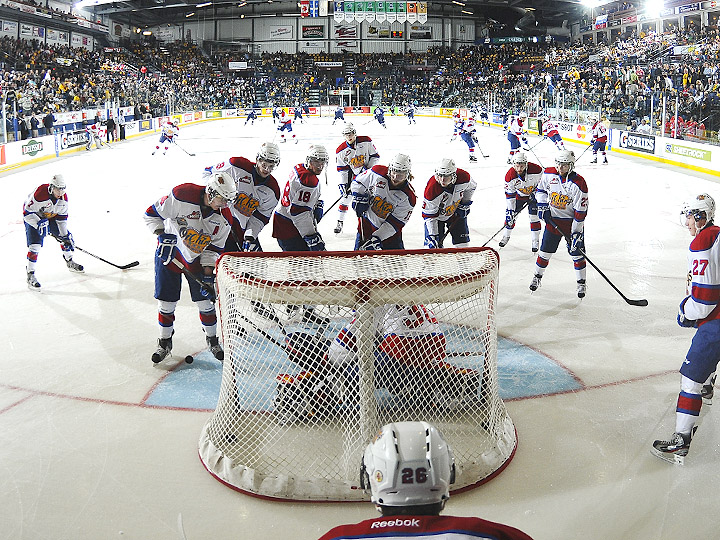 Shawinigan, QC –  The Edmonton Oil Kings earned the first victory of the 2012 MasterCard Memorial Cup with a nail-biting 4 – 3  win over the host Shawinigan Cataractes.  Edmonton’s rookie forward Henrik Samuelsson scored the game winner with just 6:18 to go in regulation time in a wild third period where the teams combined for 5 goals after a tentative start.  The Oil Kings pick up the all-important 2 points in the round robin standings and will take the weekend to prepare for their second game Monday night.

“The big thing for us is establishing the first in of the tournament.” said Oil Kings Head Coach Derek Laxdal “In a short term tournament that is very important. We got a couple of days off before we play Monday, so it gives us a chance to recuperate.”

The Oil Kings got the start they were looking for in extremely hostile territory.  Kristians Pelss started a tenacious forecheck  and the turnover he caused created a 2 on 1.  Michael St. Croix calmly slid the puck over to Pelss for a tap in goal on the contest’s first shot 2:41 into the game. That silenced the sometimes deafening crowd.

The Cataractes replied about six minutes later with the man advantage.   Team Canada defenceman and Phoenix first-round draft pick Brandon Gormley ripped a drive from the point.  Laurent Brossoit made the first save but the rebound came back to the slot for Michael Chaput who leaned into a one-timer for his first of the tournament.  It was 1 – 1 heading into the first intermission.

Emotions boiled in the second period and two heavyweights decided to drop the mitts and provide a spark for their respective clubs.  Edmonton’s Mitchell Moroz and Dillon Donnelly traded a few quick shots before Moroz wrestled the Colorado Avalanche prospect to the ice.   Cautious may be the best way to describe the rest of the middle frame.  Both teams started dealing with bouncing pucks and just a couple of scoring chances each.   The Cataractes held the lead on the shot clock 19 – 14 after 40 minutes but the game remained deadlocked at one.

The Oil Kings defencemen started to activate in the third period and got back to the style of hockey that made the team so successful during the regular season and Western Hockey League playoffs.  Griffin Reinhart’s go ahead goal was a great example of that.   The towering blue liner picked his way through centre and picked the top corner on a sharp angled shot to give Edmonton the 2 – 1 lead.

Edmonton would add some insurance about 4 minutes later.  Oilers 5th round draft pick Martin Gernat managed to blast a shot through traffic that looked to be tipped by Rhett Rachinski in front.  Gernat got credit for goal that gave the Oil Kings their short-lived, largest lead of the game.

Shawinigan made things interesting with a controversial goal.  Laurent Brossoit pounced on a loose puck with traffic forming in front of his net.   Cataractes regular season leading scorer Anton Zlobin was able to poke the puck through to give Shawinigan some life.   The referee on the ice immediately waved off the goal but after video review, the decision on the ice was reversed.   The Cataractes drew to within one.

The tying goal came four seconds later after a costly turnover from Carolina Hurricanes draft pick Keegan Lowe right in front of his own net.   The puck got tangled up in his feet and Chaput capitalized for his second of the game.  It was 3 – 3 with 6:41 seconds remaining in regulation time.

The Oil Kings showed their resiliency like they’ve done time and time again scoring the game winner just 23 seconds later.  Stephane Legault teed up a perfect one-timer for Henrik Samuelsson who wasted no time putting the winner past Alex Dubeau.

“I was just lucky to stand there for the backdoor tap in.” said Samuelsson “Griffin [Reinhart] saw [Stephane] Legault and Legault saw me, so I was lucky to be the one to put it in.”

Edmonton will now enjoy a 2 day break to prepare for their next game against the defending Memorial Cup Champion and Quebec League Champion Saint John Sea Dogs Monday night at 5:00 p.m. Edmonton time.   Edmonton hockey fans are invited to join the Official Memorial Cup Headquarters of the Oil Kings at at Earls Clareview. (13330-50 St.)  The restaurant will be showing all Oil Kings game at the MasterCard Memorial Cup.  Fans will have a chance to win some great prizes and receive some terrific menu specials just for wearing their Oil Kings colours and supporting their team.