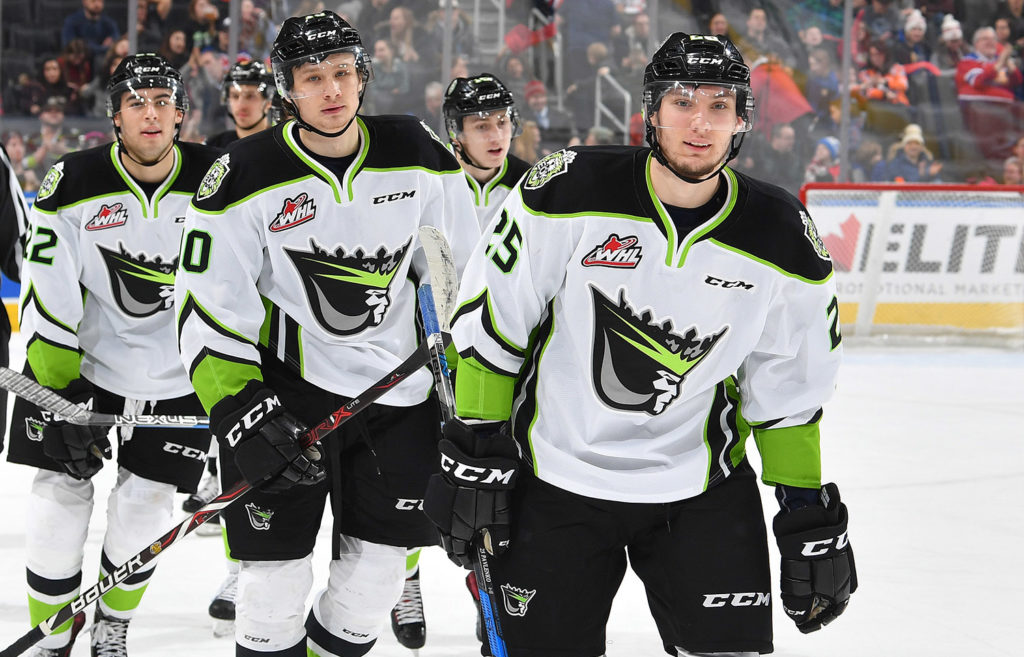 After a two-year hiatus, the Edmonton Oil Kings are headed back to the WHL Playoffs.

The Oil Kings (37-18-4-4) gave their passionate and dedicated fans lots to cheer about on Saturday night, emphatically earning a 7-1 win over the Brandon Wheat Kings (29-24-4-4) in front of a crowd of 11,981 at Rogers Place during Fan Appreciation Night presented by Dodge.

The win clinches a berth in the 2019 WHL Playoffs for the Edmonton, who last saw post-season action in 2016.

It was the sixth straight win for the Oil Kings, who have earned at least a point in 17 of their last 21 games played (16-4-0-1). It’s also the first six-game win streak of the season for Edmonton.

The Oil Kings restored their two-point lead in the Central Division (82 points, 63 GP) after the Lethbridge Hurricanes (80 points, 63 GP) were victorious over the Regina Pats earlier on Saturday.

Lethbridge can only finish as high as 40 wins and 90 points, therefore Edmonton can clinch the Division with four wins, giving them 90 points but 41 wins.

The Oil Kings first round playoff opponent, playoff dates and times have yet to be determined but will be posted on OilKings.ca once finalized.

It was also a night of personal milestones and memories for a handful of Oil Kings players, namely Parker Gavlas – named the game’s First Star – fellow defenceman Conner McDonald, and captain Trey Fix-Wolansky.

Gavlas earned the first three point game of his WHL career (3A), while an assist for McDonald gave him his 100th career regular season WHL point. Fix-Wolansky tied the record for most assists by an Oil King in a single season (68) originally set by Dylan Wruck in the 2012-13 campaign.

Dylan Myskiw (25-11-2-3) enjoyed the victory over his former team by turning aside 28 of 29 shots he faced for his fifth straight win.

Andrew Fyten’s 18th of the season came by way of the power play to give the Oil Kings a 1-0 lead at 6:09 of the opening period. Fix-Wolansky earned the primary assist on the goal while McDonald earned the secondary assist, which was the 100th point of his WHL career (regular season).

With the period winding down the Oil Kings extended their lead to 2-0, as Andrei Pavlenko buried his ninth of the season, from fellow countryman Vladimir Alistrov and Wyatt McLeod, at 19:32.

Shots on goal in the opening period favoured the Oil Kings heavily, 15-5.

Near the five-minute mark of the second period the Oil Kings were buzzing in the Wheat Kings zone. After a spirited shift which saw Quinn Benafield circle the zone not once, but twice while maintaining possession of the puck, it squirted loose and was touched by almost every other Edmonton skater on the ice. Finally, Carter Souch shoveled it past Patera to make it 3-0 Oil Kings, from Vince Loschiavo and Gavlas, at 5:25.

Under three minutes later David Kope would extend the lead to 4-0 with his 14th of the season and fifth point (3G, 2A) in his last three games at 8:14. Gavlas picked up the secondary helper, while the primary assist went to Fix-Wolansky, who tied the record for most assists in a single season with 63.

The flurry of Edmonton offence continued just 26 seconds later on a blast from the point from McLeod, his fourth of the season, from Josh Williiams at 9:40 to make it a 5-0 game and end the night of Patera.

In the third, Souch had a quality chance at the top of the Brandon crease but the puck trickled to Loschiavo for his 31st of the season, making it 6-0, with the second helper to Gavlas at 2:10.

They were able to add on just moments later after Matthew Robertson sprung Souch with a stretch pass, who then set up Benjafield for his 13th of the season to make it 7-0 Edmonton at 5:07.

With the teams playing 4-on-4 the Wheat Kings got on the board to spoil Myskiw’s shutout bid, making it 7-1 at 7:56 which is how things would finish.

Final shots on goal were 45-29 in favour of the Oil Kings.

Brandon was 0-for-4 on the power play, while Edmonton finished the game going 1-for-5 with the man advantage.

The Oil Kings return to action next Friday, March 8 when they head to Calgary to take on the Hitmen at 7:00 PM MT. They return home to close out next weekend on Sunday, March 10 against the Kootenay ICE for a 4:00 PM MT puck drop.