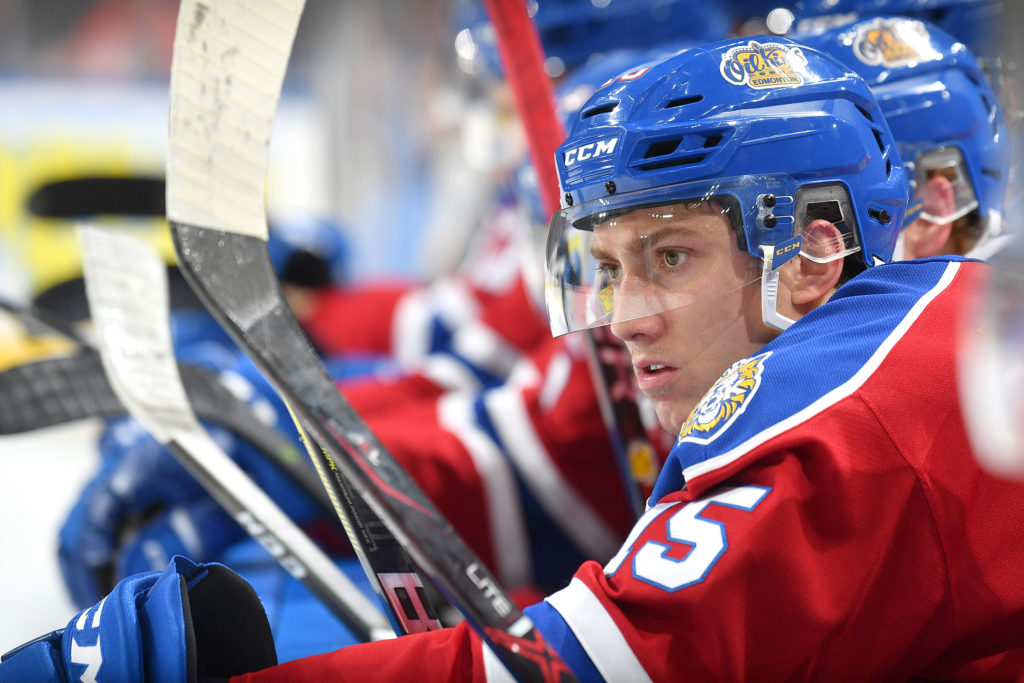 The Edmonton Oil Kings began a three-game eastern swing by squaring off against a Swift Current Broncos team near the bottom of the Western Hockey League’s standings.

But it was anything but a cake-walk, in large part due to a commendable performance by Broncos’ starting goaltender Isaiah DiLaura.

DiLaura (4-5-0-2) surrendered four goals in the losing effort but claimed the game’s First Star after a 57 save performance, keeping his team in the game throughout the majority of the night.

The Oil Kings were impressive in their own right, rebounding from a 2-0 second period deficit to score four straight goals en route to extending their streak to nine games without a regulation loss (7-0-1-1). They have registered at least a point in 19 of their last 20 games (16-1-2-1).

Riley Sawchuk, Scott Atkinson and Matthew Robertson each potted a goal and an assist in the win, while Carter Souch and Vladimir Alistrov also etched the scoresheet for the Oil Kings.

The Broncos took a 1-0 lead at 6:41 of the opening frame, and it proved to be the lone goal of the first period despite the Oil Kings outshooting the hosts, 19-6.

In the second, Swift Current doubled their lead, 2-0, just 2:11 into the period but the Oil Kings would continue to apply pressure and eventually find their way onto the scoresheet.

Just past the midway point of the period Dylan Guenther directed a shot towards the Broncos goal from the slot which fooled the defenders and DiLaura. After a short review Sawchuk was credited with his 20th of the season, cutting the Swift Current lead to 2-1 from Guenther and Logan Dowhaniuk at 10:22.

Before the period was out the Oil Kings evened things up, as Souch danced in and buried a highlight reel goal from between his legs in tight to make it 2-2, from Sawchuk, with just 1:19 left on the clock.

Robertson faked a shot – not once, but twice – before unleashing his 10th of the season just 20 seconds into the third period to give the Oil Kings their first lead of the game, 3-2, with helpers to Josh Williams and Atkinson.

Nearly five minutes later, Ethan Cap did well to keep the puck in at the Broncos blue line and found Liam Keeler, whose shot on goal was tipped by Alistrov for his 13th of the campaign to make it 4-2, Edmonton at 5:17.

Approaching the 12-minute mark of the final frame Broncos’ Jaxan Kaluski was left alone in front and once again made it a one-goal game, 4-3, at 11:44.

But the Oil Kings would solidify the road win with an empty net goal from their captain, as Atkinson sailed the puck from the near the visitors bench in the neutral zone for his 10th of the season, from Robertson, at 19:08.

Shots on goal in the third period once again favoured the Oil Kings, 21-6, for a game total of 62-24, Edmonton.

Swift Current was 0-for-3 on the power play, while Edmonton was 0-for-1 with the man advantage.

The Oil Kings remain on the road for their next two games, as they face the Prince Albert Raiders on Friday, January 24 at 6:00 PM MT, followed by the Saskatoon Blades on Saturday, January 25, also at 6:00 PM MT.