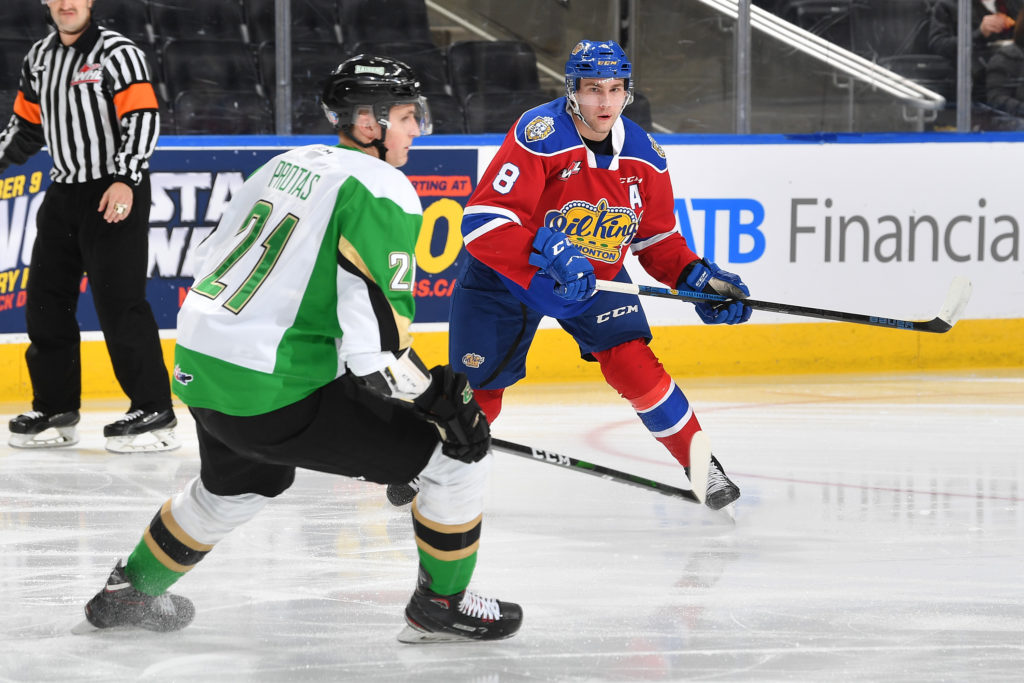 Josh Williams and Dylan Guenther etched the scoresheet, but the Edmonton Oil Kings (31-8-6-3) saw their winning ways come to an end against a conference rival in game two of their eastern road trip.

Despite a late-game push to tie the game, the Oil Kings suffered a 3-2 defeat at the hands of the Prince Albert Raiders (24-14-5-3) in front of 2,759 fans at the Art Hauser Arena – and more than 100 Oil Kings Season Seat Members viewing from Molson Hockey House at Rogers Place for their annual Watch Party – in Western Hockey League action on Friday night.

The Raiders opened the game’s scoring at 7:29 of the first period, then doubled their lead just over four minutes later at 11:35 to take a 2-0 lead into the first intermission.

Shots on goal through the opening 20 minutes favoured Edmonton, 11-9.

With just over five minutes to play in the second period the Oil Kings got on the board while on the power play, as a Williams shot from the far wall deflected off a Prince Albert defender to cut the Raiders lead to 2-1, assisted by Ethan Cap at 14:47.

Late in the third, Jake Neighbours found Guenther with a brilliant feed, who tapped home his 18th of the year to cut the lead to 3-2 at 18:05, but it was as close as the visitors could come to closing the gap, despite pulling Warm in favour of an extra attacker.

Prince Albert was 0-for-3 on the power play, while Edmonton was 1-for-2 with the man advantage.

The Oil Kings close out their three-game road trip tomorrow, Saturday, January 25 when they face the Saskatoon Blades at 6:00 PM MT.