Oil Kings Roll to Fifth Win in a Row 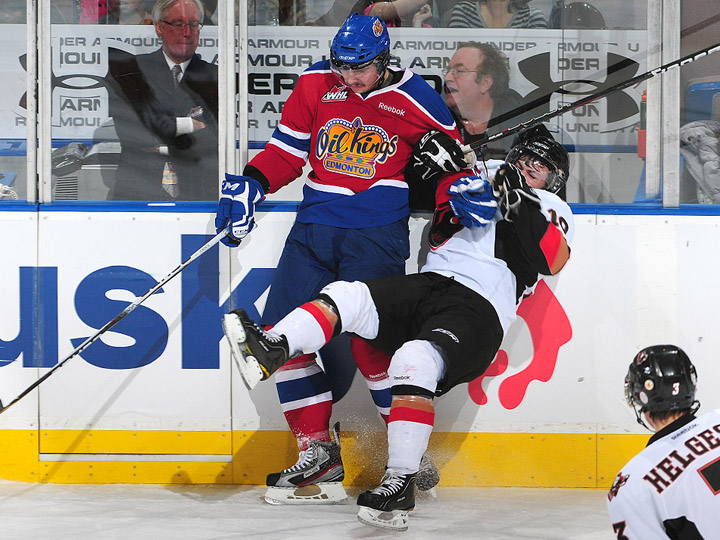 Edmonton, AB – The Edmonton Oil Kings took their fifth straight victory with a 6-1 win over the Calgary Hitmen on Thursday night in Edmonton. Jordan Peddle got things started just two minutes into the opening period as he scooped the puck at the top of the crease and tucked home his third of the season to give the Kings an early lead. Plenty of back and forth action in the first period of a high tempo game as Laurent Brossoit stood tall in goal. Finally with just over three minutes to play in the period the “California Kid” Tyler Maxwell scored a tap in after a nice cross ice pass from Martin Gernat to make it 2-0 going into the second.

Edmonton then broke things open at the end of the second period as Edmonton Oilers draft pick Kristians Pelss wired home a laser past Calgary goaltender Brandon Glover for his 12th of the season. The Latvian star is only two goals from his total of 14 last season just 27 games into 11-12. Minutes later and it was Maxwell once again the recipient of a nice feed who tallied his team leading 15th of the season. Maxwell now has four goals and two assists in four games since arriving in a trade with the Everett SilverTips.

Rhett Rachinski would then tip home a shot from Captain Mark Pysyk to tally his 7th of the season on an early third period power play. The Hitmen would finally break the shutout at the midway point of the third but it was T.J Foster who would salt this one away with his 10th on the season and first goal since returning from injury earlier this week. Pysyk has also done well since returning from his injury as he totalled three assists on the night. Pysyk looks to be peaking at a good time as he prepares for Team Canada selection camp next week in Calgary.

Goaltender Laurent Brossoit had 20 saves on the the night for his 15th win of the season. The Oil Kings were 1 for 2 on the power play and held the Hitmen to 0 for 4 with the man advantage as the Edmonton penalty kill moved into first in the WHL.

The Oil Kings will be back in action on Sunday as they look to extend the streak to six in what will be the fifth of the team’s current run of 11 straight games at home. Puck Drop is set for 6PM MST at Rexall Place – all games this season will be broadcast live on the TEAM 1260 and streamed live at WHL.ca

Follow these links:
For the WHL Scoring Summary
For the Game Night Photo Gallery

For the Video Highlights