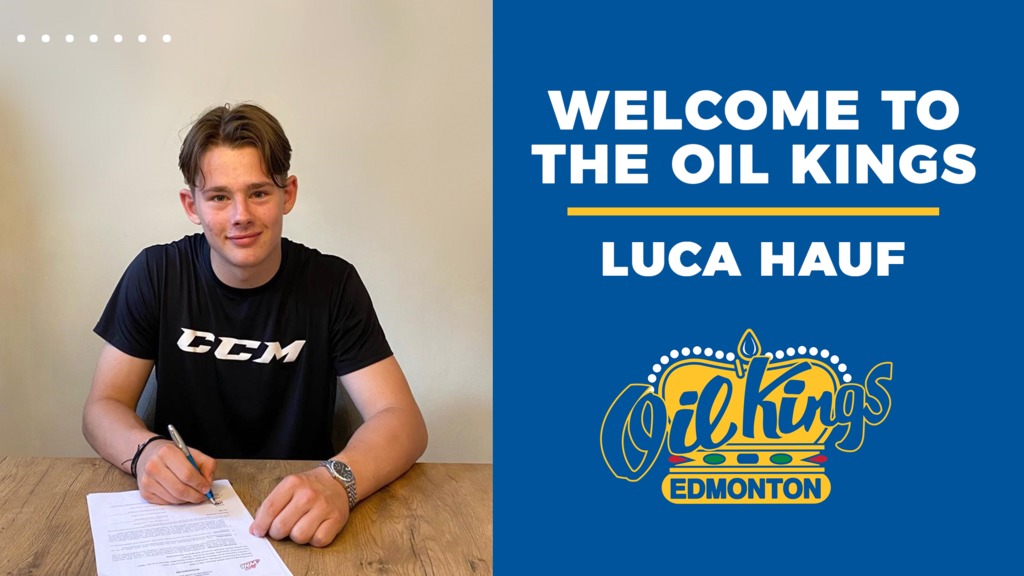 “The Oil Kings organization is very excited to get Luca Hauf signed to a WHL Standard Player Agreement,” said Oil Kings President of Hockey Operations and General Manager Kirt Hill.  “Luca is a skilled two-way forward who will be a very big part of our forward group here in Edmonton. He brings both professional and international hockey experience which should help with his transition to the North American game.”

Hauf, a Krefeld, Germany product, was selected by the Oil Kings in the first round, 59th overall, at the 2022 CHL Import Draft earlier this month.

“It was an amazing moment,” said Hauf on being drafted by the Oil Kings.  “Ever since I started playing hockey it was a dream of mine to get to play overseas in North America and when I got the call I was so happy, and it actually took a couple of days for it to truly hit me.

“After I’d heard that the Oil Kings might be interested in me, I educated myself on the team and found out what a great organization it was and coming off winning the WHL championship really speaks for itself.”

“I think of myself as a playmaking forward that can play both center and wing,” said Hauf on the type of player he is.  “I’ll do whatever is asked of me by the coaching staff, I’m pretty good in the faceoff circle and try to play a responsible game.”

Hauf also played in 12 games last year with the Krefeld Pinguine in the top German professional league, the DEL and four games with Löwen Frankfurt in the DEL2 where he registered three assists.

This past season, Hauf represented his country on two separate occasions, first at the 2021 Hlinka Gretzky Cup last August in which he had one assist in four games, and then again at the 2022 IIHF World U-18 Hockey Championship in Germany in April where he had three goals in four games.

Hauf will be looking to represent Germany at the upcoming World Junior Championship in Edmonton from August 9-20 at Rogers Place as he is currently attending Team Germany’s training camp.

Hauf will become the first German-born player to suit for the Oil Kings in franchise history.