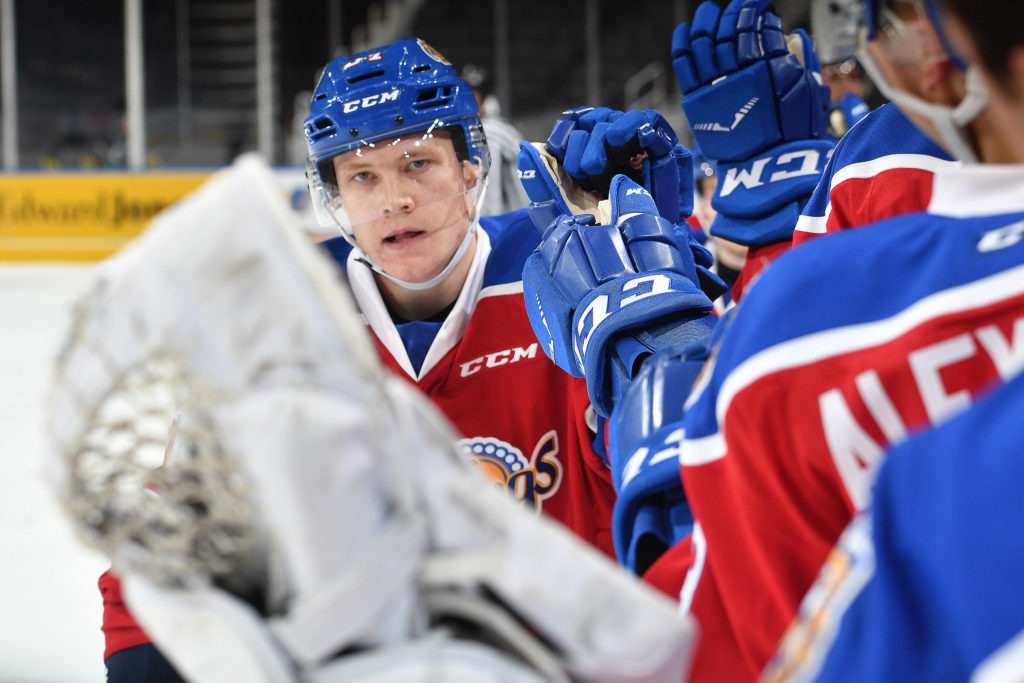 Captain Trey Fix-Wolansky had a three-point night and centre Vince Loschiavo netted a pair of goals – including the game winner – as the Edmonton Oil Kings (1-0-0-0) skated to a 4-2 win over the Red Deer Rebels (0-1-0-0) in the team’s season opener at Rogers Place on Friday night.

The Oil Kings led 2-0 in the second period, but a pair of quick goals by the Rebels notched the game at two goals apiece to set up a third period showdown.

Both of Loschiavo’s goals came in the third, which propelled the Oil Kings to their first regulation win in their season opener since the 2014-15 campaign.

Boston Bilous (1-0-0-0) got the start in goal for the Oil Kings and earned the win, turning aside 20 of 22 Rebels shots, which included just four in the second period.

In the first period, Andrei Pavlenko, Carter Souch and Scott Atkinson combined for a pretty passing play which resulted in a quality scoring chance, however the game would remain scoreless through 20 minutes with the Oil Kings leading in shots, 18-11.

It was Brett Kemp who got the Oil Kings on the board for the first time this season, giving the team a 1-0 lead with a power play goal at 5:05. The play developed on a heads-up feed from goaltender Bilous, who sprung Kemp by lifting a pass through the neutral zone. On a two-on-one, Kemp found Fix-Wolansky who immediately returned the pass, as the Yorkton, SK native buried his first of the year into a wide open cage.

Just over three minutes later Fix-Wolansky fed David Kope, who was turned aside by Anders, but Conner McDonald was ready to pounce on the rebound making it a 2-0 game at 8:11.

Soon after the Oil Kings would earn their third power play of the night, but it was the Rebels who took advantage of the shorthanded opportunity. Oleg Zaytsev tallied his first of the season to cut the Edmonton lead to 2-1, from Josh Tarzwell, at 13:34.

Just under one minute later the game was tied, as an Alexander Alexeyev shot deflected into the back of the Oil Kings net to make it 2-2, from Reece Johnson and Brandon Hagel, at 14:32.

The pair of Rebels goals came on just four Red Deer shots during the middle frame, as the Oil Kings skated into the second intermission outshooting their opponents, 32-15.

In the third period, Matthew Robertson corralled the puck near the top of the slot and waited patiently until he found a wide open Loschiavo who buried his first of the season, restoring the Oil Kings lead, 3-2, at 6:56. It was the second power play marker of the game for the home side, with Robertson earning the lone assist.

Loschiavo would seal the first victory of the season for Edmonton with the empty net goal, from Fix-Wolansky, at 19:19.

Red Deer finished the night 0-for-2 on the power play with a shorthanded goal while Edmonton was 2-for-5 on the man advantage.

Tickets are still available for all Edmonton Oil Kings home games during the 2018-19 season. Great seats start at just $20. Visit OilKings.ca for more information or to purchase.