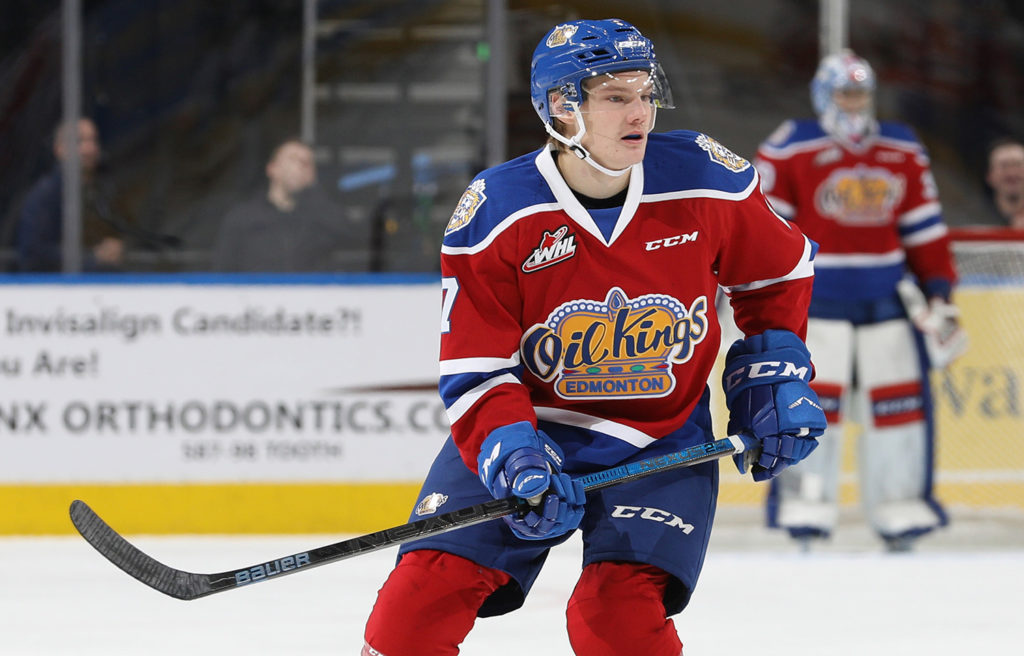 The Edmonton Oil Kings have the playoffs in their sights, and they inched even closer to securing their official pursuit of the Ed Chynoweth Cup with another win over a divisional opponent on Saturday night.

The win was also the fifth this season by the Oil Kings (5-1-0-1) over the Rebels, which allowed them to maintain sole possession of first place in the Central Division standings (76 points). The Lethbridge Hurricanes led the Medicine Hat Tigers when the final whistle blew in Red Deer. A Hurricanes win would keep them two points back of the Oil Kings with 74 points.

The Brandon Wheat Kings – who currently hold the final Wild Card spot – suffered a 7-1 loss on Saturday to the Prince Albert Raiders. The most points the Wheat Kings could now finish with is 83, meaning even if the Wheat Kings ran the gamut and won their nine remaining games, the Oil Kings can clinch a playoff berth with seven points.

Captain Trey Fix-Wolansky joined the 30-goal club for the second time in his career as one of the Oil Kings goal scorers on the night, and with the goal – his 86th in three seasons with the Club – he moves into a tie (with Lane Bauer, 2013-17) for 6th all-time in goals scored in modern franchise history.

Conner McDonald earned an assist, and inched closer to the 100-career regular season points mark with 96.

Dylan Myskiw (23-11-2-3) was sharp in goal for Edmonton, surrendering just one goal for the majority of the night before the Rebels managed to slip one by him with just two seconds left on the clock. He earned the win with 21 saves on 23 shots on goal.

Ethan Anders (24-18-4-0) took the loss, allowing five goals on 33 shots. He was pulled in favour of Byron Fancy after surrendering the fifth goal of the game at 10:36 of the third period.

Vince Loschiavo continued to build on the best statistical season of his career with his 28th goal of the season, giving the Oil Kings a 1-0 lead at 12:09 of the first period with the lone assist to Carter Souch.

Just under four minutes later Parker Gavlas earned a milestone memory he’ll never forget, notching his first career WHL goal with a blast from the point that beat Anders top corner to extend the Edmonton lead to 2-0, unassisted, at 15:54 sending the game to the first intermission.

Shots on goal in the first period of play favoured the Oil Kings, 10-9.

Nearing the midway point of the second, Fix-Wolansky joined the 30-goal club for the second time in his major junior career to make it 3-0 Edmonton. The goal came by way of the power play, and was assisted by McDonald and Vladimir Alistrov.

It was the lone goal for either side in the period, which saw the Oil Kings outshoot the Rebels by a larger margin this time, 16-7.

Just 1:37 into the third Andrei Pavlenko registered his eighth of the season, also an unassisted marker, to extend the Edmonton lead to 4-0.

But just 50 seconds later the Rebels spoiled Myskiw’s shutout bid with a shorthanded goal to make it a 4-1 game.

At 5:13 Alistrov tallied his tenth of the season to restore the four-goal lead for the Oil Kings, 5-1, banking in a rebound off an initial shot by his fellow countryman Pavlenko.

Red Deer was 0-for-4 on the power play but managed the shorthanded marker, while Edmonton finished the game going 1-for-7 with the man advantage.

The Oil Kings are back in action on Tuesday for Hockey Hooky when they host the Swift Current Broncos at Rogers Place for an 11:00 AM MT start.