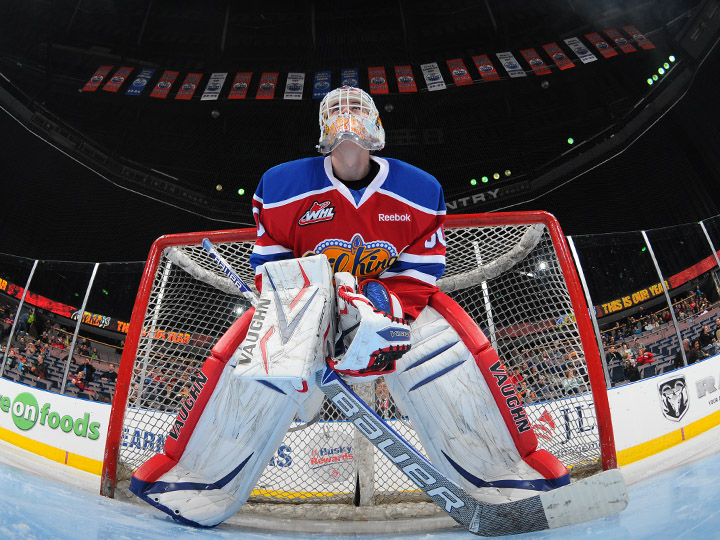 Prince George, BC – Dylan Wruck led the way with two goals and an assist as the Oil Kings posted a 4-2 come from behind win over the Cougars on Saturday. Despite playing their fourth road game in five nights the Kings were able to leave Prince George with back to back wins. Edmonton raised their record to 13-5-1-2 on the season and end their six game road trip with a record of 4-2-0-0.

The visitors fell behind early as the Cougars Tanner Lishchynsky was able to convert a nice back hand just three minutes in. David Musil would answer for the Oil Kings later in the period for his fourth of the season and first in an Oil Kings jersey. The newest King took a nice feed from Michael St.Croix and tallied on a wrister from the top of the slot. But the Cougars would regain the lead off a goal by Jarrett Fountaine with 35 seconds left in the period.

The Oil Kings would kill a pair of key Cougars power plays to start the second before answering with an equalizer midway through the period. St.Croix skated the puck from behind the net and made a nice pass across the top of the crease to Wruck for his first of the game. The Kings then took the lead as a streaking Keegan Lowe joined the rush and put a backhand upstairs from in tight. Lowe’s second of the season gave Edmonton their first lead in the final minute of the second period.

St.Croix would make nice play for his third helper of the game as he assisted on Wruck’s second tally – an empty net goal late in the third. Oil Kings starting goaltender Tristan Jarry shut the door on the Cougars with timely saves throughout the night. Jarry finished the game with 21 saves as he raised his record to 4-3-0-0 on the year.

The Oil Kings penalty kill went a perfect 3 for 3 on the night and did not allow a power play goal for the entire six game road trip on 29 opportunities.

COMING HOME
The Oil Kings will return to home ice at Rexall Place on Saturday, Nov. 17 as they host the Raiders for their third meeting of the 2012-13 season. Back by popular demand, the Oil Kings will once again give away 1,000 WHL Championship replica rings. All fans at the game will be eligible to receive a ring, since scratch-and-win tickets will be used to determine the winners.

FOR MORE INFO ON RING NIGHT 2.0 OR TO PURCHASE TICKETS

Tickets are available at OILKINGS.CA, at the Rexall Place Box Office or at Ticketmaster outlets. For more information on season seats or flex packs, call 780-414-GOAL (4625).The Oil Kings 2012-13 season is presented by JLT, Insurance & Risk Management.