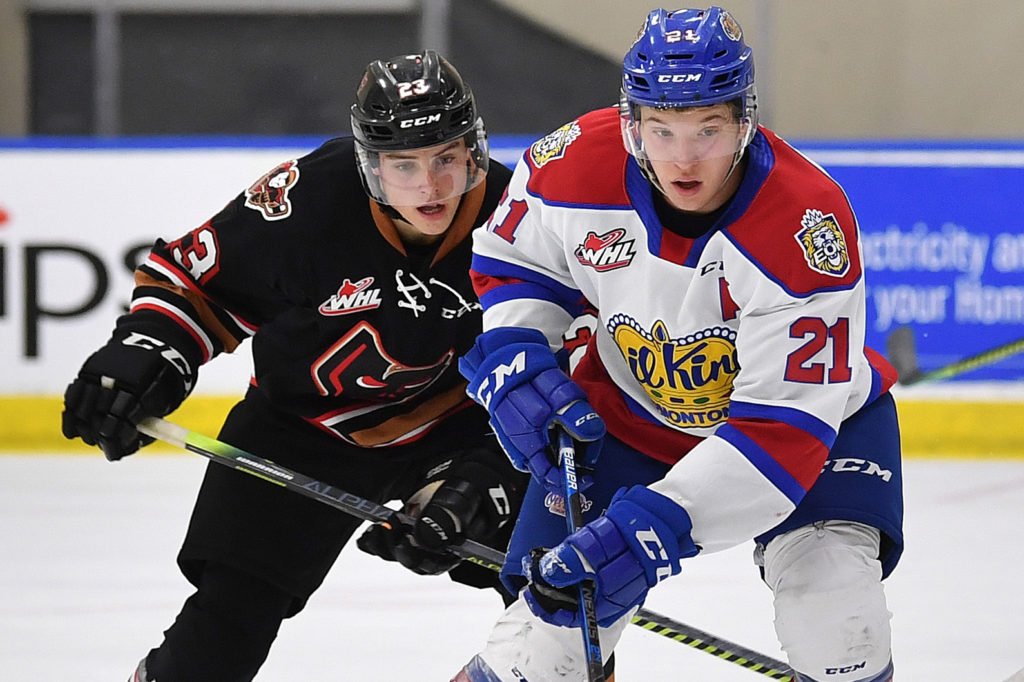 The Edmonton Oil Kings scored three times in the first period and added three more in the second to skate to a third straight pre-season win, 6-2, over the Calgary Hitmen at Seven Chiefs Sportsplex on Saturday night in Western Hockey League pre-season action.

Todd Scott got the start and stopped all 23 shots he faced in a pre-determined 40 minutes of work between the pipes for the Oil Kings before being replaced by rookie Sebastian Cossa who turned aside 13 of 15 shots.

Riley Sawchuk led the way offensively with a three-point effort (2G, 1A), while Jake Neighbours chipped in with a goal and an assist. Scott Atkinson, Carter Souch and Dylan Guenther were the other goal scorers for Edmonton, who travel to Dawson Creek, BC for their final two exhibition games of the WHL pre-season – both against the Prince George Cougars – on September 12 and 14 at 8:00 PM MT and 2:00 PM MT, respectively.

Atkinson got the Oil Kings off to an early lead with his first of the pre-season, from Jalen Luypen, at 1:21 of the first period.

Souch made it 2-0 with his first of exhibition play, assisted by Tyler Horstmann, at 6:37.

With 16 seconds left in the opening frame Neighbours took advantage of the Oil Kings third power play opportunity of the period – with just six seconds left on the man advantage – to extend the lead to 3-0, from Jesse Seppälä and Sawchuk, to round out scoring in the first 20 minutes.

The Oil Kings added another trio of goals in the second, this time a shorthanded marker by the overage newcomer Sawchuk, from Matt Smith, at 2:45 to give Edmonton a 4-0 lead.

Sawchuk tallied his second of the game and third point of the night to extend the visitors lead to 5-0, the team’s second power play marker, from Neighbours just over five minutes later at 7:51.

Guenther’s fourth of the pre-season was yet another power play goal on the night for the Oil Kings, who took a commanding 6-0 lead at 11:18, assisted by defenceman Parker Gavlas, at 11:18 to close out scoring after 40 minutes of play.

Final shots on goal favoured the Hitmen by a 38-30 margin after Calgary outshot Edmonton, 15-4, in the third period.

The Hitmen were held scoreless on the power play, 0-for-4, while the Oil Kings were 3-for-7 with the man advantage.