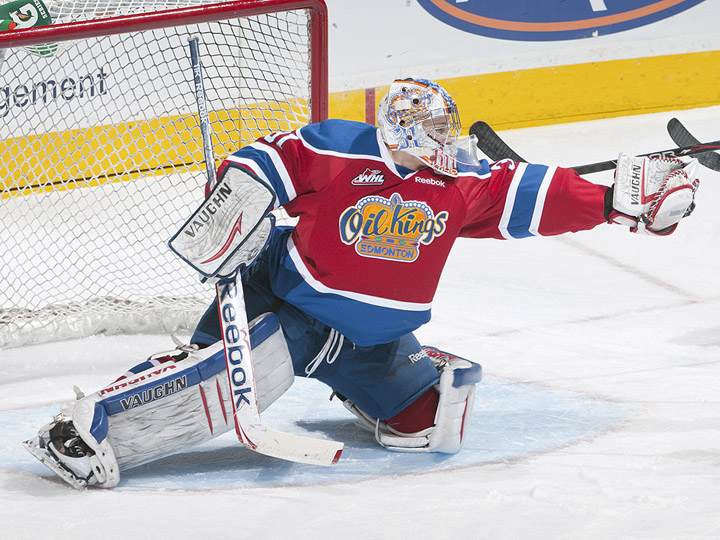 Edmonton, AB – Led by a four point night for T.J Foster including the game winner – the Edmonton Oil Kings exploded for five unanswered second period goals en route to a 7-3 win over the Brandon Wheat Kings on Thursday at Rexall Place. The win was Edmonton’s eighth in a row and during this eight game winning streak the high octane Oil Kings offense has outscored their opponents by an amazing 49-15 margin.

Stephane Legault continued his comeback tour as he tucked a loose rebound to give the Oil Kings a 1-0 lead with 13:02 one in the first period. Legault posted his second straight two point night since returning from illness that kept him out for nearly a month. Good back and forth in the first but the Oil Kings were unable to capitalize on their three power play opportunities, hitting two posts in the opening frame. Brandon would then open the scoring in the second period as Rene Hunter tallied the equalizer with about five minutes gone in the second to knot things up at one a piece. Brandon would then take their first lead of the night off a goal by Ayrton Nikkel.

But in what has become a nightly occurence during this recent homestand the Oil Kings high octane offense turned it up and hit high gear in the face of adversity. Less than a minute after losing the lead Michael St.Croix made a nice backdoor pass to Griffin Reinhart who one timed his 6th of the year with about eight minutes to play in the second. T.J. Foster would then add his 12th of the season soon after to give the Kings a 3-2 lead before roofing a shot for his second of the night just three miutes later to make it 4-2.

Then, just over a minute later Klarc Wilson took a nice feed on the rush from Dylan Wruck as he snapped home his 4th of the season with a nice shot over the shoulder shortside on Brandon goaltender Corbin Boes chasing the Brandon’s starting goaltender from between the pipes. Rhett Rachinski got in on the action and notched his 10th of the year with less than 30 seconds to go in the frame. All totalled the Oil Kings raced to five straight unanswered goals in less then eight minutes to take a 6-2 lead into the third.

The Wheaties would show signs of life as they made it 6-3 early in the third off the stick of Brenden Walker. But Wruck would answer back with one of his own just past the five minute mark of the period to reestablish the four goal lead at 7-3. Wruck extended his point scoring streak to 10 games during which time he has piled on 20 points with 6 goals and 14 assists. ‘The California Kid’ Tyler Maxwell also extended his point streak to ten games with a pair of assists as both players currently find themselves tied with Kootenay’s Sam Reinhart for the longest current point streaks in the league.

Goaltender Laurent Brossoit tallied another win to push his record to 18-7-1-1. The Oil Kings power play went 0 for 3 on the night while the best penalty kill in the league held the Wheaties to 0 for 1 with the man advantage.

The Oil Kings will be back in action and looking to extend their streak to nine on Saturday night as they take on the Prince Albert Raiders. This will mark the eighth game in the Oil Kings run of 11 straight games at home. Puck Drop is set for 7PM MST at Rexall Place – all games this season will be broadcast live on the TEAM 1260 and streamed live at WHL.ca

Fans are reminded that this game will be the first World Junior Bobblehead giveaway with SAM GAGNER bobbleheads going to the first 500 fans in the door! Also don’t forget the only way to guarantee your choice of a Gagner, Hall, Eberle, Dubnyk or Smyth World Jr. Bobblehead is by purchasing an 8 Ticket Flex pack! Contact 414 GOAL today for details or follow this link to order online and get your pick of your favorite!

There is still a way to be here live for one of the biggest junior hockey events in the world! The Oil Kings will be releasing the last 500 Oil Kings World Junior Mini Packs THIS FRIDAY – December 9th at 10 a.m. That’s five World Jr. tournament games at Rexall Place plus 18 Oil Kings tickets over this year and next year for just $499. Choose between a Boxing Day Pack (Which includes Canada’s tournament opening game on December 26th against Finland) or a New Year’s Eve Pack (which includes Canada’s New Year’s Eve matchup against the U.S.A.) while supplies last. This limited quantity will be released for ONE DAY ONLY THIS FRIDAY! That’s the last 500 World Junior Mini Packs on sale Friday December 9th at 10 AM. Only available at oilkings.ca