MENU
THE WESTERN HOCKEY LEAGUE HAS UPDATED ITS RETURN TO PLAY PLAN FOR THE 2020-21 SEASON
October 9, 2019

Oil Kings tie game in final minute, but fall to Warriors in OT 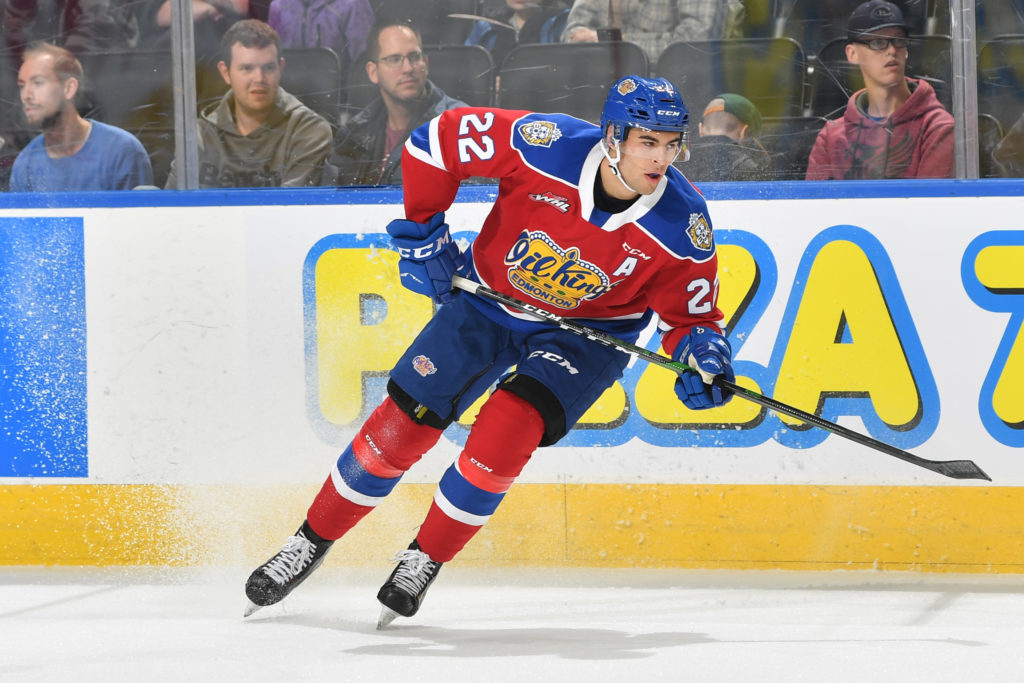 It was a back-and-forth affair complete with an exciting, last-minute game-tying goal, but in the end things didn’t end the way the Oil Kings had hoped on Wednesday night.

There were plenty of positive take-aways for the Oil Kings, however, as they wrap up their eastern road trip having earned at least a single point in all five games (3-0-2-0).

Matthew Robertson – fresh off of putting pen to paper on his three-year, entry level contract with the New York Rangers this week – tallied his first of the season and joined Riley Sawchuk atop the scoresheet with a goal and an assist for the Oil Kings.

Liam Keeler was the other goal scorer for Edmonton, who head home with eight of a possible ten points on the nine-day road trip.

The Warriors took a 1-0 lead early, as they were able to jam away at a loose puck in the Oil Kings crease at 1:42 of the first period.

But in the closing minutes of the opening frame the Oil Kings tied the game, as Sawchuk buried his fourth of the season, from Robertson and Jacson Alexander at 16:16, to round out scoring in the first period.

In the second, a blast from the blue line made its way through traffic to give Robertson his first of the season, assisted by Jake Neighbours and Sawchuk on the power play at 3:30.

Just over five minutes later the home team responded, as Moose Jaw tied the game, 2-2, at 8:35.

Towards the end of the frame with a power play opportunity of their own, the Warriors caught the Oil Kings out of position in the defensive zone and reclaimed the lead, 3-2, at 17:35 on Matthew Benson’s first career WHL goal to close out scoring in the middle frame.

Moose Jaw took control of the shot clock in the second, outshooting Edmonton 11-8.

The third period played out as scoreless for more than 19 minutes, but not for a lack of trying on the part of the Oil Kings, as they held Moose Jaw to just a single shot on goal through more than three quarters of the period. Finally, after the Oil Kings pulled Scott in favour of an extra attacker they tied the game, 3-3, with just 41 seconds remaining to send the game to overtime with assists to Scott Atkinson and Wyatt McLeod.

Shots on goal in the third registered 18-3, Oil Kings.

In overtime, momentum unfortunately didn’t follow through for the Oil Kings as the 3-on-3 frame was controlled heavily by the Warriors. Edmonton managed to get a quality opportunity about half-way through, but the game ended on the stick of Joseph at 2:49.

Final shots read 36-28, Oil Kings, which included a 3-1 margin in favour of the Warriors in overtime.

Moose Jaw was 1-for-2 on the power play while Edmonton went 1-for-3 with the man advantage.

The Oil Kings return home for their next game when they host the Calgary Hitmen on Saturday, October 12 at 7:00 PM MT at Rogers Place.