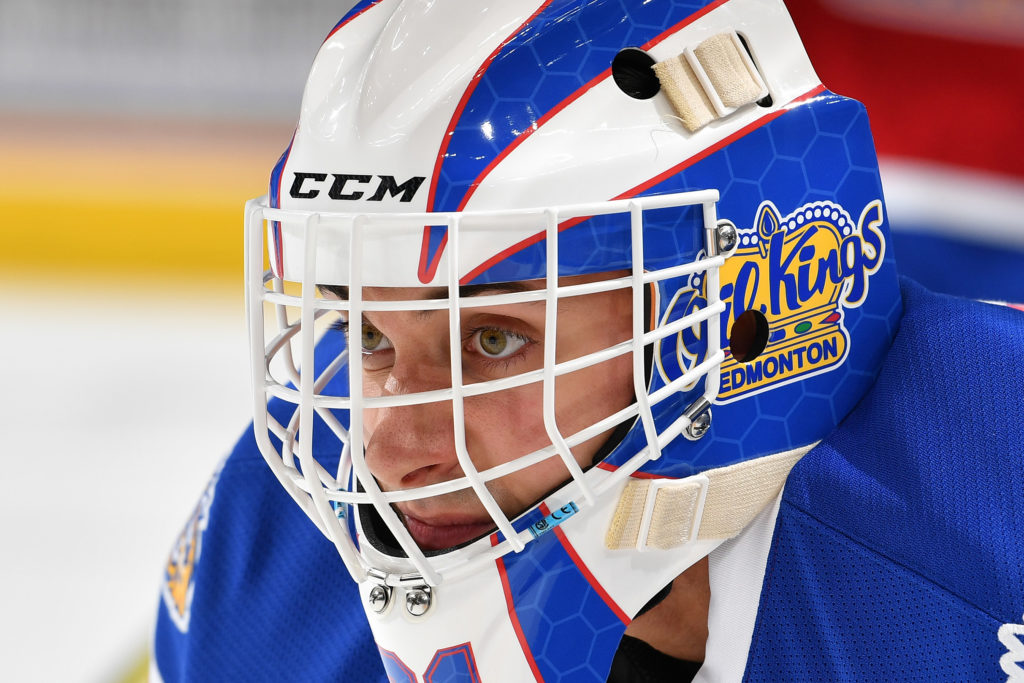 The Edmonton Oil Kings were out to alleviate some road woes, and they did so with an exclamation point on Friday night in Cranbrook.

Dylan Myskiw made 39 saves and seven different Oil Kings (7-7-0-1) etched the scoresheet as Edmonton earned a convincing 7-2 victory over the Kootenay ICE (4-6-2-1) in front of 2,208 fans at Western Financial Place.

Maybe even more impressive was the fact they earned the high-octane win without the services of forward Vince Loschiavo, followed by losing defenceman Jacson Alexander in the second period.

Myskiw’s 39 saves were his second most in a game this season, and improved his record to 5-5-0-0.

His counterpart Duncan McGovern (4-3-2-0) struggled with the explosive Oil Kings offense, as he surrendered six goals on 30 shots before being replaced by Jesse Makaj just past the midway point of the game.

Conner McDonald opened the scoring for the Oil Kings on the power play, tallying his fourth of the season from Trey Fix-Wolansky and Brett Kemp at 4:41 of the opening period.

Just under four minutes later Scott Atkinson made it 2-0 Oil Kings with his fourth of the season, from Carter Souch, to extend the lead to 2-0 at 8:30.

Liam Keeler capped off first period scoring with his second snipe of the season, from Quinn Benjafield and Vladimir Alistrov, at 16:59 to give the Oil Kings a 3-0 lead heading into the first intermission.

Shots on goal favoured Edmonton, 19-10, through the first 20 minutes of play.

The ICE were called for tripping just 48 seconds in and Benjafield made them pay with a highlight reel power play goal. Moving into the offensive zone he danced around a Kootenay defender, then drove to the net before roofing the puck over the shoulder of McGovern to make it 4-0, assisted by McDonald and Myskiw, at 1:55.

Souch continued to pile it on for the Oil Kings, notching his third of the year at 7:25 to make it 5-0, with the lone assist to Andrei Pavlenko.

Defenceman Matthew Robertson got into the action with his first of the campaign, making it 6-0 Edmonton, from Fix-Wolansky and Jake Neighbours at 12:54, ending the night of McGovern.

Alistrov acquainted himself with Makaj just over four minutes later, potting the touchdown marker at 17:17 with his third of the season to make it 7-0. Defencemen Ethan Cap and Wyatt McLeod picked up the assists, but second period scoring wasn’t done there.

The ICE managed to spoil Myskiw’s shutout bid with a power play goal, as Cameron Hausinger tallied his fourth of the season to make it a 7-1 game, from Nolan Orzack and Brett Davis at 19:01 to cap off a busy second period of scoring.

The lone goal of the third period belonged to the ICE, as Cole Muir capitalized on what was an Edmonton power play notching his second of the season, shorthanded and unassisted, to make it a 7-2 game at 14:58.

The ICE managed to heavily outshoot the Oil Kings in the third period, 17-2, to finish the game with a 41-37 edge.

Kootenay finished the night going 1-for-5 on the power play with a shorthanded goal, while Edmonton was 2-for-4 with the man advantage.

The Oil Kings play their second game of the three-in-three weekend tomorrow, Saturday, October 27 when they host the Saskatoon Blades at Rogers Place at 7:00 PM MT for Superhero Night.