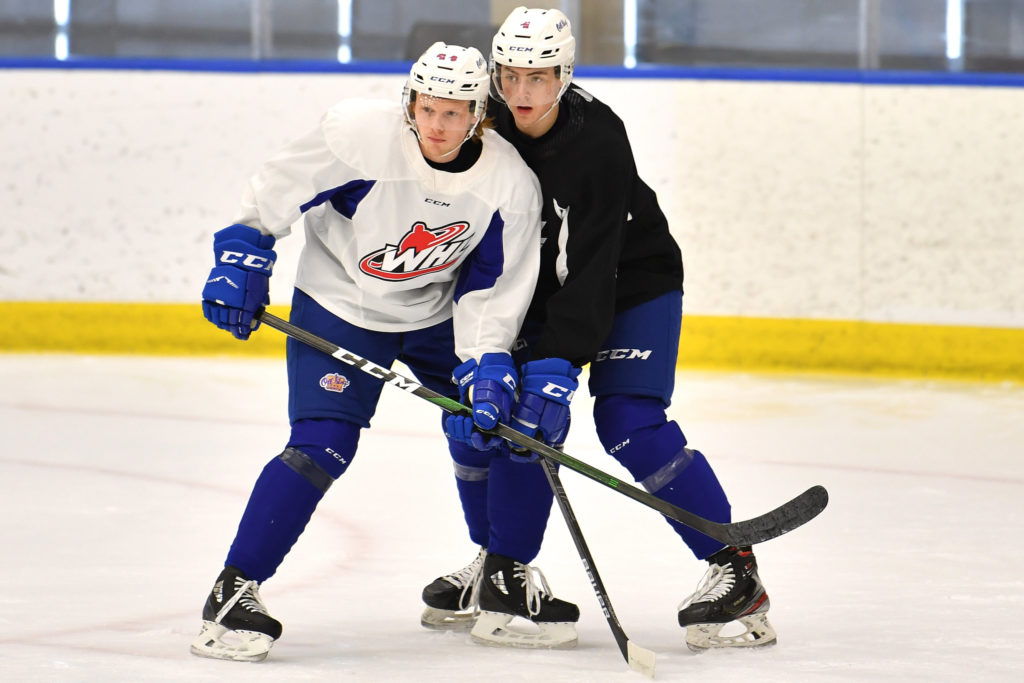 Edmonton, AB – The Edmonton Oil Kings are furiously preparing for the fast-approaching start of the 2020-21 WHL season.

Following a two-week isolation phase, the players met up for the first time together as a group on February 13 and the first piece of business was getting a crash course on this season’s guidelines and protocols from an on and off-ice perspective.

“There is a long list of protocols from the league that obviously all the teams, players and billet families need to follow,” said Oil Kings President of Hockey Operations and General Manager Kirt Hill. “So far the kids have put the work in with their isolation at home and in Edmonton to make sure they got their two negative tests in a row and through the first week of camp the guys seem extremely bought in. I think they’ve come to realize what they have been missing out on in the last 330 days.”

With the new policies and procedures in hand, it was time for the players to get back to doing what they love to do – competing.

“The first day, probably even my watching was sloppy, the practice itself was kind of sloppy too,” chuckled Hill. “But it’s great to be back and even just seeing the guys when they showed up at the rink with the smiles on their faces and getting to be with one another again. That’s the biggest part of this whole thing, the guys showing their passion and how much they want to be on the ice and getting better and wanting to achieve as a group.”

On Saturday, the team played its first modified intra-squad game that saw team Red defeat team White by a 5-1 margin.  Josh Williams and Jalen Luypen each had a pair of goals for Red, while Carter Souch chipped in as well. Following a mid-game trade, Williams would score team White’s lone goal of the contest as well.

The Oil Kings enter this season coming off a second consecutive Central Division crown last year and are also the defending regular season Eastern Conference champions. While the season will be a condensed 24-game schedule and a playoff format is yet to be determined, Hill says he expects his team to be in the mix once again near the top of the newly-formed Alberta Division.

“I think it’s been pretty clear from myself and the coaching staff, expectations are high,” said Hill. “We have a good group, we have a veteran group, we have a lot of great leaders in that room, we really like the rookie group that we’ve brought in and so expectations are high. We expect them to compete to win the division, that’s the message that’s been delivered to the players.”

With the players under tight restrictions in terms of where they can and can’t go both at the rink and away from it, the team has gone above and beyond to find unique ways to keep the players busy.

“Well obviously with Edmonton being hub central here we’ve got to see some things they’ve done with the World Juniors and NHL bubble,” said Hill.  “The Molson Hockey House here at the rink, the guys have a pretty good games room setup in there with a golf simulator, ping pong tables, TVs and it’s just an area for them to have their own space. We call it a players lounge and really it’s an opportunity for them to get out of the dressing room and feel like it’s their own space where they can bond as a group and a place when they’re not at their billet houses that they can hang out.”

When it comes to school, the team has taken “home” schooling to a whole new level. A socially-distanced classroom has been set up in Ford Hall overlooking 104 Avenue. The players are able work on their studies daily from the area with the assistance of Oil Kings Education Advisor Sharon Sereda.

This week the team will go through some final tune-ups, a second modified intra-squad game on Tuesday and be ready to open their 2020-21 WHL season on Friday night when they play host to the Lethbridge Hurricanes at 7:00 PM at the Downtown Community Arena.