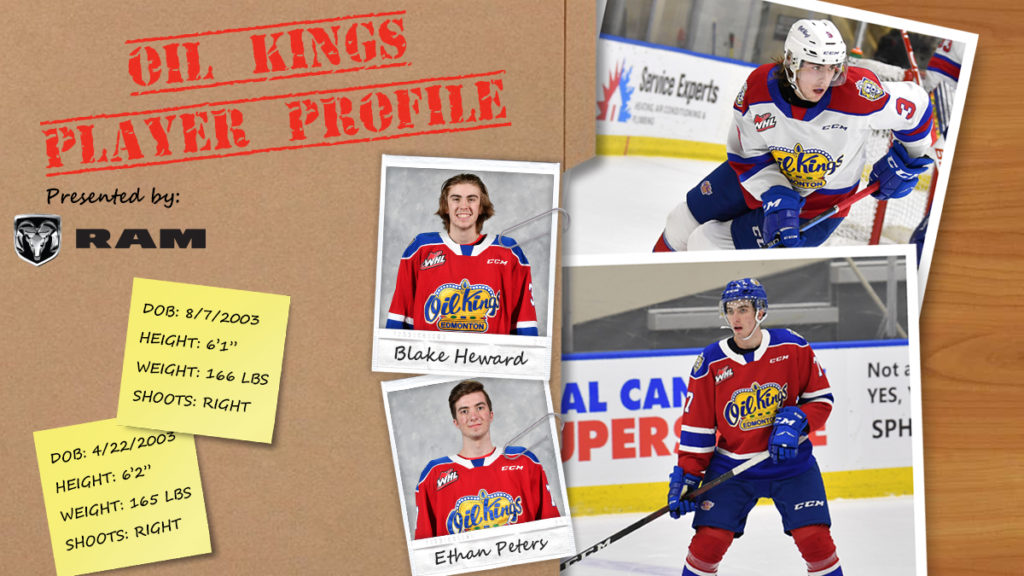 Edmonton, AB – Like fathers, like sons. For a pair of south Saskatchewan born rookie Edmonton Oil Kings defencemen, they’ve followed a path to the Western Hockey League carved out by their fathers.

“It’s definitely way different,” laughed Heward when comparing his dad’s era of WHL hockey to his. “Playing in the old barns and stuff like that, it’s a big change. But, it’s still WHL hockey, you still have certain things that are the same, but he definitely has some good stories from back then.”

Following his playing career, Jamie joined the Swift Current Broncos as an assistant coach from 2012-18 and then took an associate coaching position with the Vancouver Giants from 2018-20. He now serves as an assistant coach with the American Hockey League’s Henderson Silver Knights, the AHL affiliate of the Vegas Golden Knights.

“He’s really good at it,” added Heward on how his father walks the line between coach and parent. “After a game he’s a little bit like my coach and teaching me stuff but he’s like any ordinary parent, he doesn’t try to do too much, so it’s good.”

Heward was originally drafted in the seventh-round, 153rd overall, in the 2018 WHL Draft by the Swift Current Broncos before being listed by the Oil Kings in February of 2019 after the Broncos dropped him from their protected list.

During the 2019-20 season, Heward suited up in just eight games with the Delta Hockey Academy’s U18 Prep team due to injury, picking up two assists. He began this season back at home with the Regina Pat Canadians U18 AAA team and got off to a hot start with nine points (4G, 5A) in just seven games before their season was cut short due to the pandemic.

Heward came to the Oil Kings abbreviated training camp in February still unsigned and in a battle for one of the few roster spots up for grabs. Thanks to a strong showing in a short amount of time, he’d earn a WHL Standard Player Agreement and make his Oil Kings debut on February 27.

“It was just the little things, I didn’t too much to go out of my way to make plays,” said Heward on finding his spot on the team. “It wasn’t easy, which is the same for every rookie, we were battling for two weeks. Probably the biggest thing for me was asking questions and doing everything I could on my end because there are certain things you can’t control.”

Fast forward nearly three months and it’s been a strong rookie season for the 6-foot, 166-pound defencemen. He’s become a regular amongst the Oil Kings top-six defencemen, appearing in 16 games and picking up three assists to go along with a +6 rating.

“It’s been pretty good,” said Heward on his first year in the WHL. “Bit of a slow start, just getting the feel for it my first couple of games. The boys gathered me, I’ve felt like I’ve got my legs under me and feel a lot more comfortable now. The speed coming up from midget-AAA was a big adjustment, but you get used to it and now I feel more confident in moving pucks better and stuff like that.”

When it comes to the help he received in being able to make the jump to the WHL, Heward credits his father’s belief and guidance.

“He played in the league a long time ago, it’s definitely changed since then but he’s been a big factor in helping me get to this next level,” said Heward. “He’s always been there, he gives me tips and pointers and stuff to watch for. He always believed in me and told me I could make the next step to the WHL.”

Heward isn’t the only rookie defenceman on the Oil Kings roster this year who finds himself as a second-generation Western Hockey League rearguard. Ethan Peters, from Moose Jaw, Saskatchewan, is the son of Jason Peters, who played in the league from 1988-92 with the Moose Jaw Warriors, Victoria Cougars, Saskatoon Blades and Tri-City Americans.

“He knows a thing or two about how the league works, he’s been through it all,” said Peters. “It’s nice to have a guy to call after every game who just gives you the rundown on what he’s thinking and what he’s seeing because he’s a defenceman too. He’s always giving me his points and tips, and it’s pretty cool to share that same experience that he had (playing in the league).”

For Peters, his road to the Oil Kings does have a lot of similarities to that of Heward’s, but there is one difference; he went undrafted following his second year of bantam hockey with the Prairie Hockey Academy. Despite that, he came to the Oil Kings training camp as a free agent in the fall of 2018 undeterred by his draft status.

“It wasn’t the traditional route or the one I had in mind,” added Peters on his path to the Oil Kings. “But I took the opportunity to come to camp (in 2018) and make an impression on the coaching staff, and they listed me after camp, so that was great and then it was just a matter of going to work. Playing midget-AAA with the Moose Jaw Warriors last year, I think that really helped speed up my development.”

“It was pretty cool, I’ve had the chance to go against Blake a lot over the past couple of years,” said Peters. “We’ve had some good games, some pretty intense games but it was good to have a familiar face at camp and someone to lean on.”

Peters is just one of four players on the Oil Kings roster this year to suit up in all 19 of the team’s games. On April 2 in Red Deer, Peters collected his first career WHL goal, ripping a shot top-shelf from the high-slot over the shoulder of Rebels goaltender Byron Fancy. Along with his goal, he has chipped in with three assists and a +9 rating.

“Being on the team that I am that has the amount of depth and veteran players and leaders obviously helps because they lead you along,” said Peters on his development through his first year in the league. “Just coming in off the first five or six games, going from midget-AAA to the WHL is a big step but I think playing with these guys and even the pace in practice helps a lot, so it helped me be more comfortable. It was good to get the feet wet in those first few games and after that its just been a matter of getting more comfortable.”

Having now got a taste of the WHL, Peters admits there has been an evolution of the league since his father played.

“You hear the stories coming in of what he was going through in his years back in the day and it’s changed a lot, I’ll tell you that,” chuckled Peters. “You still see some of the same similarities, he sees some things that haven’t changed but its obviously a completely different game out there compared to back in the day. But, its really cool to have my dad whose been there and been through it.”