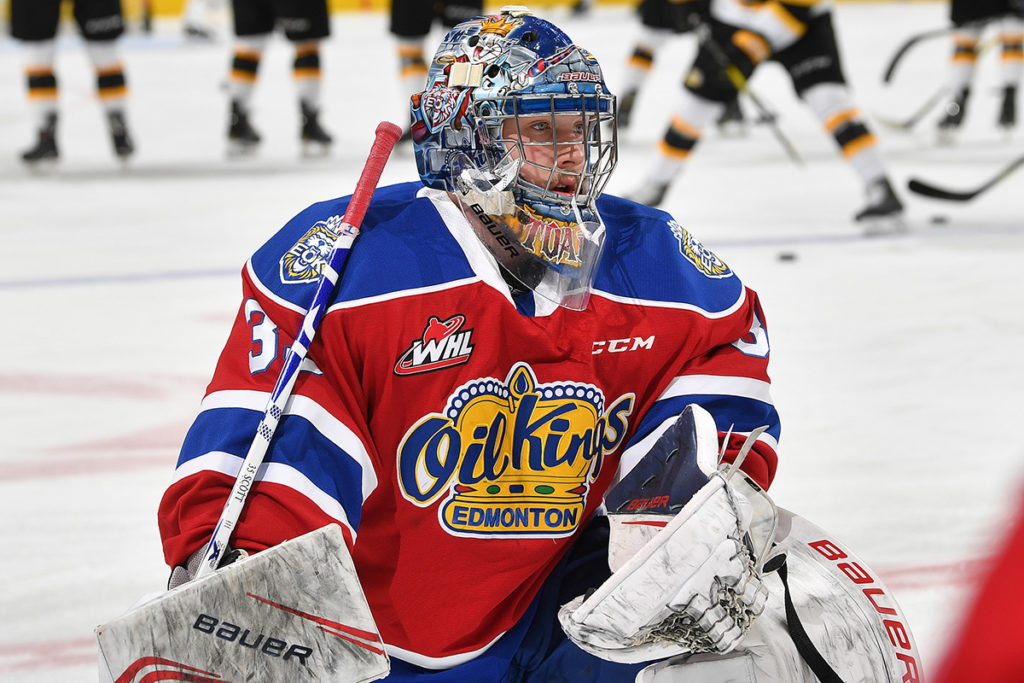 Tomorrow the fur will fly, but tonight the tempers flared between the provincial rival Oil Kings and Hitmen.

The Edmonton Oil Kings (19-6-4-2) took advantage of five power play opportunities, scoring three times with the man advantage to hand the Calgary Hitmen (14-8-3-1) a 4-2 defeat in front of 7,415 fans at the Scotiabank Saddledome on Friday night.

Todd Scott (8-4-4-1) started between the pipes and was integral to the Oil Kings road win, turning aside 40 of 42 shots he faced – including 22 saves in a third period which saw the Oil Kings outshot 23-2 – en route to earning the game’s Second Star.

The two teams will meet for the seventh time this season tomorrow when the Oil Kings host the Hitmen for the annual Teddy Bear Toss presented by The Brick at Rogers Place at 7:00 PM.

The Hitmen opened the game’s scoring, giving the home team a 1-0 lead at the five minute mark of the first period.

It was the lone goal of the opening frame, which saw the Oil Kings outshoot Calgary by a 10-8 margin.

Edmonton surged out of the gates to start the second, taking advantage of a Hitmen hooking penalty just 33 seconds in.

And just 26 seconds into the man advantage the Oil Kings capitalized, as David Kope tallied his ninth of the season from the slot after a nice feed from Carter Souch, who was fed by an equally intelligent pass from Wyatt McLeod to tie the game, 1-1, at 0:59.

Later in the period, the forecheck of Jake Neighbours produced a turnover in the offensive zone, and Neighbours drove towards the net with room and roofed the puck over Peters to make it 2-1 Edmonton. The goal was unassisted – and also came on the power play – at 11:43.

The Oil Kings were awarded their fourth opportunity with the man advantage after a Hitmen tripping call at 15:28, and again they made it count. Edmonton won the ensuing face-off in the Calgary zone, and after applying pressure Dylan Guenther drove to the net and earned credit for his eighth of the season, from Ethan McIndoe and Riley Sawchuk, at 15:53.

Maintaining their 3-1 lead – which included a 5-on-3 penalty kill near the midway point of the period – the Oil Kings looked to hold on for the road win but were challenged by a late goal from the Hitmen at 18:37 to make it a one-goal game.

With just 23 seconds remaining the home team was pressing, but captain Scott Atkinson made a sprawling block to help relieve the Hitmen threat.

But on the play the Oil Kings were whistled for cross checking, and the Hitmen sent six skaters to the ice against the four from Edmonton after pulling Peters.

However, Edmonton won the draw and Jalen Luypen sailed the puck to the opposite end of the ice and into the empty net – his sixth of the season – from Liam Keeler to solidify the 4-2 win.

Calgary was 0-for-3 on the power play, while Edmonton was 3-for-5 with the man advantage.

The Oil Kings are back in action – again, against the Hitmen – in short order as they host the annual Teddy Bear Toss presented by The Brick tomorrow night, Saturday, December 7 at 7:00 PM at Rogers Place.