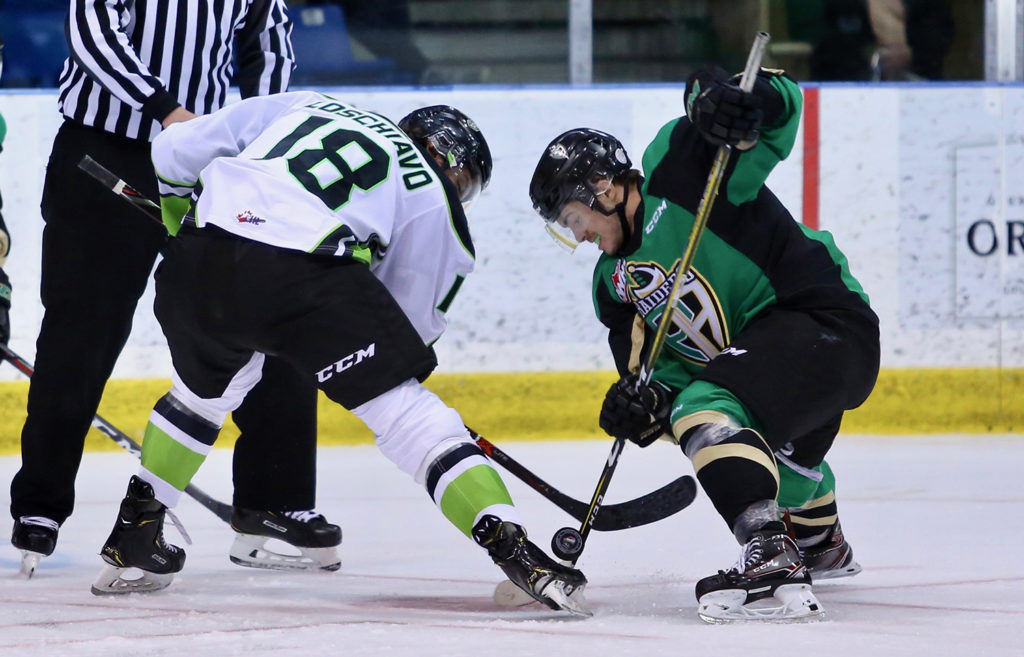 There were penalties galore, late-game magic, and an undefeated-at-home streak on the line – but in the end, the Prince Albert Raiders (29-2-0-1) managed to escape a ferocious fight from the Edmonton Oil Kings (16-12-4-2) to claim a 6-5 overtime win in front of 2,288 fans at Art Hauser Centre on Wednesday night.

It was pegged to be a meeting of the League’s top two in the scoring race, but with Brett Leason attending Hockey Canada’s camp for World Juniors, Oil Kings captain Trey Fix-Wolansky was cast as the lone man in the scoring spotlight. He would extend his point-scoring streak to ten games and, in turn, tied Leason for the League lead in scoring at 64 points.

Fix-Wolansky now boasts 21 goals and 43 assists on the season, and his ten-game point streak reaches 18 points (8G, 10A).

The game itself was a back-and-forth affair, with the teams tied 1-1 after one period of play and the Oil Kings up 4-3 after 40 minutes.

But with the Raiders up 5-4 late in the third period, Vince Loschiavo tallied the equalizer for the Oil Kings with just six seconds remaining to send the game to the overtime period, tied 5-5.

Despite surrendering six goals, Todd Scott (1-1-2-0) had an impressive overall performance in goal for the Oil Kings, standing tall on a number of shorthanded, even strength and power play opportunities by Prince Albert to keep the visitors in the game. He stopped 26 of 32 shots faced.

Noah Gregor gave the Raiders a 1-0 lead just 1:49 into the game with his 15th goal of the season, with the lone assist to Cole Fonstad.

Under five minutes later the Oil Kings tied things up, 1-1, as Conner McDonald notched his seventh of the season, from Scott Atkinson, at 6:17 to send the game into the first intermission.

Gregor’s second of the night came by way of the power play to restore the one-goal lead for the Raiders, 2-1, from Max Martin and Parker Kelly at 6:09.

But just over two minutes later Carter Souch answered with a power play goal of his own – his sixth of the season – from David Kope and Ethan Cap at 8:32 to make it a 2-2 game.

The Oil Kings rode the momentum from Souch’s power play marker and took a 3-2 lead just 50 seconds later as Jake Neighbours notched his seventh of the season, assisted by Wyatt McLeod and Atkinson at 9:22.

Kelly once again made it a tie game, 3-3, with a power play goal for the home side, assisted by Gregor and Fonstad for his 14th of the season at 11:18.

But another special teams opportunity presented itself for Edmonton and the Oil Kings took full advantage, as David Kope tallied his fifth of the season from McDonald and Fix-Wolansky at 15:34, sending the two teams into the second intermission with a 4-3 Edmonton lead.

After the first half of the third period generated no offense, it was Prince Albert who struck first in the final frame as Martin from Spencer Moe once again tied things up, 4-4, at 11:55.

And just 33 seconds later the Raiders struck again, taking a 5-4 lead on a goal by Carson Miller assisted by Ozzy Wiesblatt and Zack Hayes, at 12:28.

The Oil Kings would pull Scott with 1:29 to play in regulation and the Raiders had a number of chances to solidify the win with an empty net goal, but to no avail.

Instead, with just six seconds left to play Loschiavo tallied his 18th of the campaign to tie the game, 5-5, from Matthew Robertson and McDonald to send the game to extra time.

With opportunities presenting themselves for both sides, it was the Raiders who would plunge the final dagger at the 2:00 mark as Fonstad’s 11th of the season secured the undefeated record on home ice for Prince Albert, assisted by Martin.

Prince Albert was 2-for-6 on the power play while Edmonton finished the night going 2-for-7 with the man advantage.