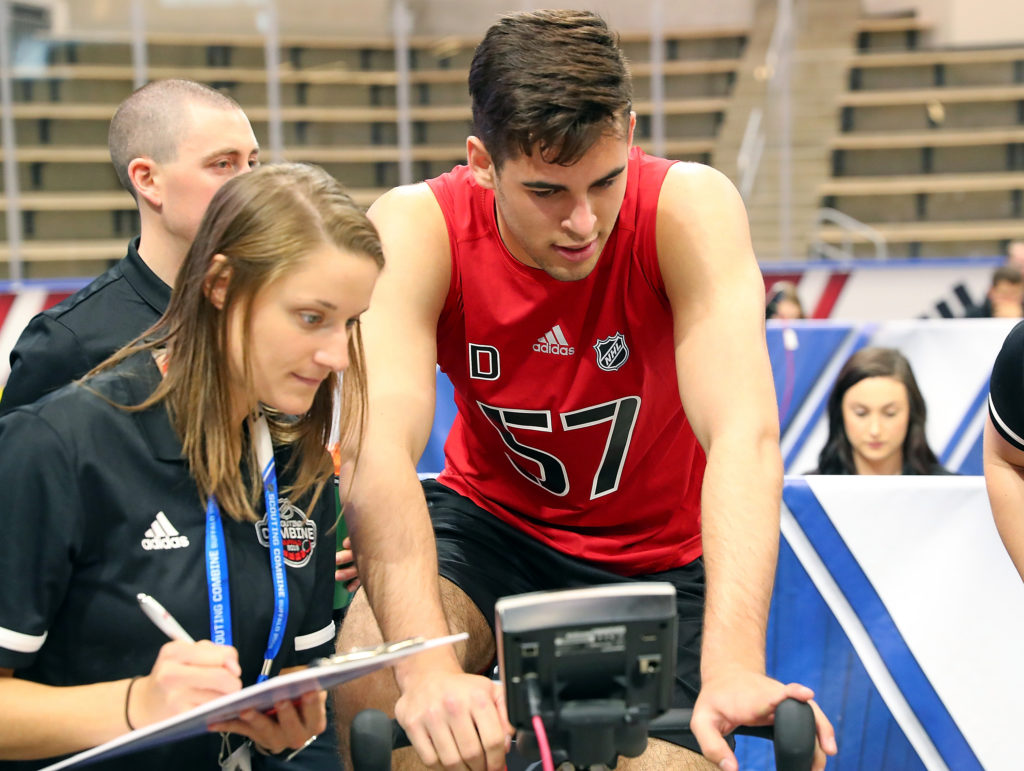 Edmonton Oil Kings defenceman Matthew Robertson made quite a positive impression at the NHL Scouting Combine, which wrapped up Saturday afternoon from Buffalo, NY.

The Sherwood Park, AB native was among 108 players who attended the Combine this week ahead of next month’s NHL Draft to be held at Rogers Arena in Vancouver, BC on June 21 and 22.

A total of 58 forwards, 40 defenceman and 10 goaltenders underwent interviews with representatives from NHL teams, then participated in various physical examinations and fitness tests.

Robertson spoke with 29 NHL teams over the course of the week, and ranked in the Top-25 of four of the 12 fitness tests which took place Friday and Saturday:

Conducted using a standard padded bench with the athlete lifting 50% of his body weight (pre-determined) utilizing free weights (including the barbell). The athlete lies on his back on the bench and grips the barbell with thumbs approximately shoulder width apart. The buttocks must remain on the bench with the feet on the floor. The starting position is with the arms fully extended. The bar is lowered to the chest, after a slight pause, athlete pushes the bar as quickly as possible until their arms are fully extended. Each athlete will perform three reps at maximum velocity, with a slight pause between each rep at the chest position. A “Gym Aware” device will be used to measure the velocity of the bar and the athlete’s ability to produce power. The reported score will be measured in watts/kg.

Robertson’s wingspan was measured at 77.00 inches, the 10th longest wingspan among all Combine participants which ranked him tied for 13th overall. The longest recorded wingspan was 80.75 inches by Alex Vlasic.

Athlete does as many consecutive pull ups they can while maintaining the correct technique.

Robertson registered eleven consecutive pull-ups, which tied him for the 23rd among all Combine participants. Eleven was the sixth highest mark on the day, with four prospects registering a high of 16 (Nils Hoglander, Cole Caufield, Mikhail Abramov, Artemi Kniazev).