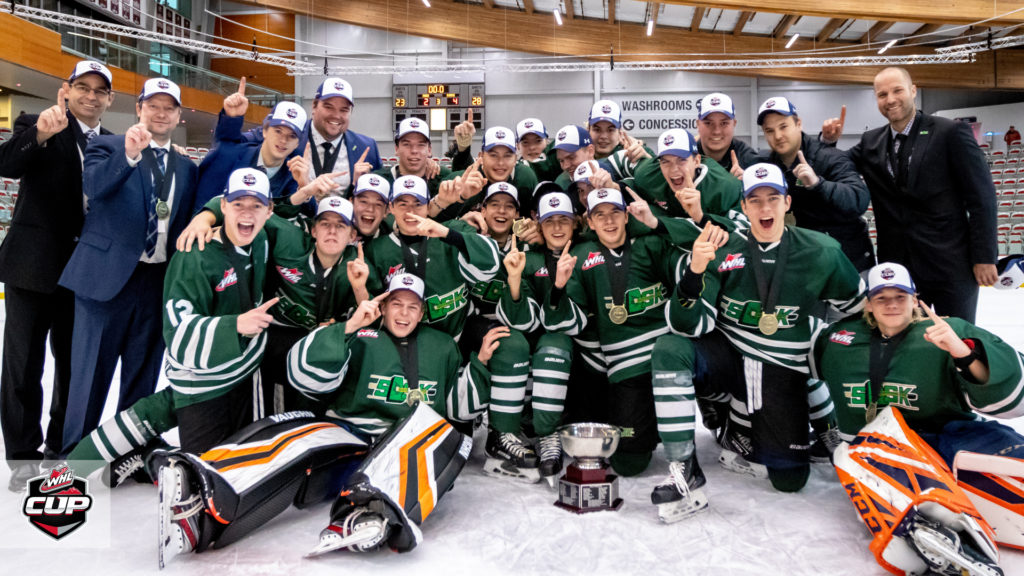 Oil Kings prospects Kylynn Olafson and Eric Johnston claimed gold as members of Team Saskatchewan during the 2019 WHL Cup, which wrapped up Sunday in Calgary.

For the first time in the history of the WHL Cup, Saskatchewan are tournament champions following a 4-2 victory over Manitoba.

Kylynn Olafson and Tye Spencer each had a goal and an assist with Olafson’s second-period goal standing up as the game-winning goal.

Tye Spencer put the visiting Saskatchewan side on the board with the only goal of the first period, but Tyson Zimmer replied for Manitoba 3:30 into the middle period to even up the game.

The first two power-play opportunities of the game went Saskatchewan’s way in the second period and they didn’t waste either chance. With Manitoba in the box, Vaughn Watterodt converted with 11 seconds left in the man advantage to push Saskatchewan up 2-1. Put on the power play 19 seconds after the 2-1 goal, Saskatchewan took advantage again as Olafson’s goal doubled their lead.

With 6:37 left in regulation, Manitoba captain Conor Geekie pulled his province with a goal. In a tournament filled with late-game comebacks and crazy finishes, there’d be no flipping of the script this time as Eric Johnston potted an empty-net goal with 20 seconds to go, clinching the victory.

Dylan Ernst earned his second win in as many days, stopping 21 of 23 shots. 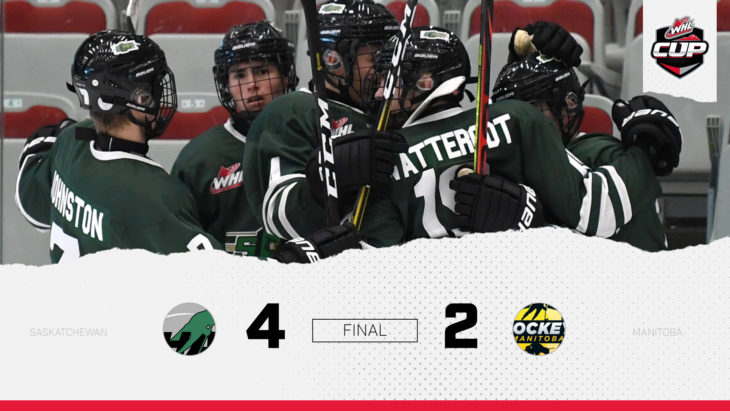 Jace Weir completed an incredible comeback for British Columbia Sunday at the 2019 WHL Cup, lifting them to a 5-4 overtime victory against Alberta to claim the bronze medal at the tournament. Trailing 3-1 entering the third, the visitors erupted for three goals to put themselves back into the game.

Alberta was rolling early on as Billal Noori and Tyler Mackenzie both scored in the opening period. Midway through the second, Connor Gourley converted on a penalty shot to make it a three-goal game in favour of the home side.

Kyle Chyzowski would get his province on the board moments later, but Alberta would still take a two-goal advantage into the third period.

Brayden Schuurman cut the Alberta lead to one in the first half of the final period, but a goal from Graydon Gotaas with 3:17 left in regulation appeared to put the game out of reach.

A late power play for British Columbia brought them within one again as Carter Streek found the back of the net. Buzzing 19 seconds later, British Columbia tied up the game on Brandon Lisowsky’s fourth goal of the tournament.

That set the stage for overtime, with Weir completing the comeback 5:43 into the extra period. Picking up the primary assist on the game-winning goal, defenceman Mats Lindgren finished the game with three helpers.

In net, Kyle Kelsey stopped 31 of 35 shots to earn his second win of the tournament.

Schuurman and Streek each picked up an assist to go with their goal. Jaren Brinson picked up a pair of helpers in the loss for Alberta. 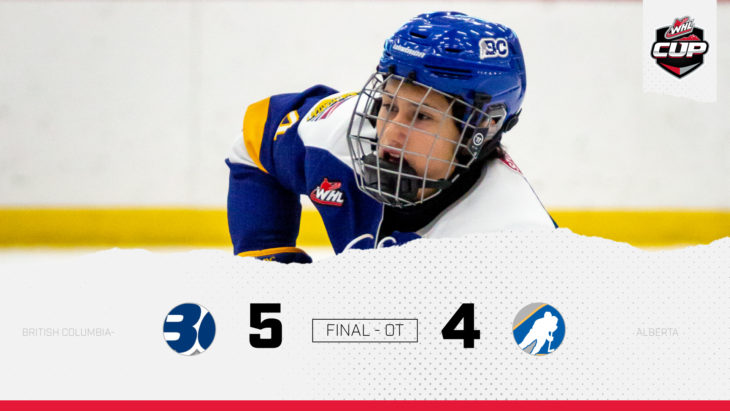