MENU
THE WESTERN HOCKEY LEAGUE HAS ANNOUNCED ITS RETURN TO PLAY PROTOCOL FOR THE 2020-21 SEASON
November 17, 2019 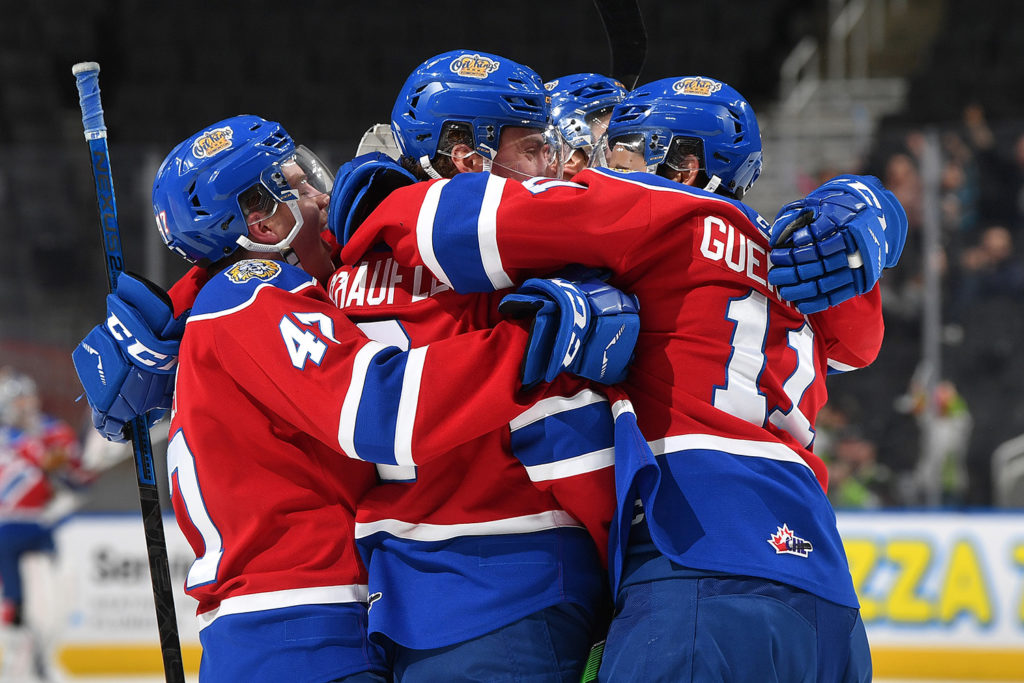 Early on, it looked like a game the Edmonton Oil Kings had no business being in, but a stunning comeback made for an interesting finish on Sunday evening.

The home side gave up early goals in both the first and second periods – at 0:22 and 0:56, respectively – followed by additional single markers just past the four-minute mark of each frame to put them in the 4-0 hole.

At that point the comeback looked improbable, but after a pair in the second period by the Oil Kings – which included an absolute beauty by Vladimir Alistrov – and another pair in the third, the game was off to extra time.

David Kope (1G, 1A), Dylan Guenther (1G, 1A) and newly acquired defenceman Loeden Schaufler with his first career WHL marker were the other goal scorers on the night, which marked the final home game for the team at Rogers Place until Saturday, November 30 versus the Calgary Hitmen at 2:00 PM.

Todd Scott (7-3-3-1) took the loss in goal, stopping 30 of 34 shots he faced in regulation and overtime, before surrendering a pair in the shootout.

Ethan Kruger (6-9-0-0) picked up the win, also stopping 30 of 34 shots strewn his way before allowing a single goal in the shootout.

With the first shot of the game, the Wheat Kings took a 1-0 lead as Cole Reinhardt scored his 11th of the season just 22 seconds into the afternoon’s action.

At 4:16, it was 2-0, Brandon on Lynden McCallum’s sixth of the season. Minutes later, the Oil Kings looked poised to get themselves on the scoresheet with an extended 5-on-3 advantage for 59 seconds, but the Wheat Kings killed off the calls to send the game into the first intermission.

Shots on goal in the opening period of play favoured Brandon, 11-5.

The Wheat Kings scored another early goal in the second, taking a 3-0 lead just 56 seconds into the frame. On the ensuing draw the Oil Kings were whistled for hooking, then called for another hook at 2:29 to give the Wheat Kings their own 5-on-3 advantage for 29 seconds.

The Oil Kings managed to kill off the first, but with 17 seconds left in the second infraction Brandon capitalized, making it 4-0 after a goal-mouth scramble at 4:12.

Near the midway point of the period, the home side would finally etch the scoresheet as Kope scored his fifth of the season, assisted by Logan Dowhaniuk, making it 4-1 at 10:13.

Then, as the period was nearing an end, Alistrov scored a highlight reel goal to bring the Oil Kings back to within a pair. Driving towards the Wheat Kings goal, he passed the puck through his own legs then went backhand, top-shelf over the shoulder of Kruger. Kope and Riley Sawchuk earned the assists on the goal, which came at 17:22.

The Oil Kings cut the lead to 4-3 at 6:16 of the third period when Guenther scored his first goal – and second point – in two games since returning from Under-17’s, one-timing a rebound into a wide open cage from the slot with Wyatt McLeod earning the lone assist.

They came all the way back just past the midway point of the period, as the newcomer Schaufler tallied his first career WHL goal with a blast from the point that beat the Brandon netminder and tied the game, 4-4, from Guenther and Neighbours at 10:30.

After the remainder of regulation and a five-minute 3-on-3 overtime solved nothing, the game headed to a shootout, with the Wheat Kings shooting first.

Brandon was 1-for-4 on the power play while Edmonton went 0-for-5 with the man advantage.

The Oil Kings now embark on a five-game road trip through BC, beginning in Prince George to take on the Cougars Tuesday night, November 19 for an 8:00 PM MT start. They continue on to Victoria to face the Royals on Friday, November 22 at 8:05 PM MT, before meeting the Vancouver Giants the very next evening, Saturday, November 23 at 8:00 PM MT.