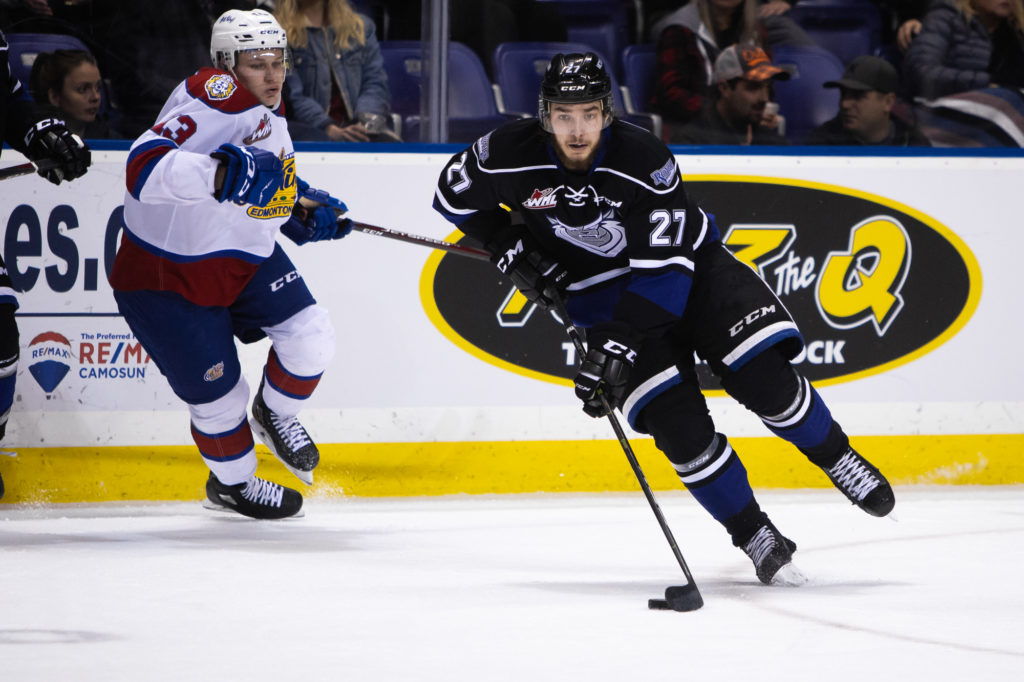 It was a regal match-up in name, but the Victoria Royals proved they’re the kings of their castle on Friday night.

Carter Souch, Riley Sawchuk and Liam Keeler were the goal scorers for the Oil Kings, who led for just 3:59 on the night after Keeler’s shorthanded goal in the third period, but failed to stave off the opposition.

The Royals captain opened the game’s scoring with Victoria’s first shot on goal, giving the home team a 1-0 lead at 3:07 of the first period.

The Oil Kings would tie the game before the frame was finished, as Souch registered his eighth of the season after some unrelenting effort in front, unassisted, to make it 1-1 at 17:59.

But before the period was out the Royals restored their lead, as Schultz notched his second of the game after burying his own rebound with 53 seconds left on the clock.

Shots on goal in the first period of play favoured Edmonton, 14-9.

In the second, Sawchuk got on the board with his first in five games to reclaim sole possession of the team lead in goals with his 11th of the campaign, making it a 2-2 game. David Kope and Aidan Lawson earned the assists on the goal at 6:36.

It was the lone goal of the middle frame, despite a pair of quality chances by the Oil Kings on the same sequence with 1:08 left to play. The Oil Kings once again outshot the Royals, 15-4, for a two-period total of 29-13.

The Oil Kings took their first lead of the game just under three minutes into the third, as Keeler surged with a burst of speed to break into the offensive zone all alone and go five-hole on Farkas – shorthanded and assisted by Ethan Cap – at 2:51.

Just four minutes later the tables turned, however, as the Royals battled back with a pair of quick goals just 1:35 apart to restore their one-goal lead, 4-3.

Schultz completed the hat trick for the Royals, and did so by potting a shorthanded goal of his own to make it 5-3 Victoria at 12:32.

The Royals maintained the two-goal lead, despite the Oil Kings pulling Cossa with 2:31 to play in an attempt to tie things up, holding on for their sixth win in their last seven games.

Final shots on goal were 39-20, Edmonton which included a 10-7 margin in the third period for the Oil Kings.

Both teams were 0-for-4 on the power play with a shorthanded goal.

The Oil Kings continue their five-game road trip through BC when they face the Vancouver Giants tomorrow night, Saturday, November 23 at 8:00 PM MT.