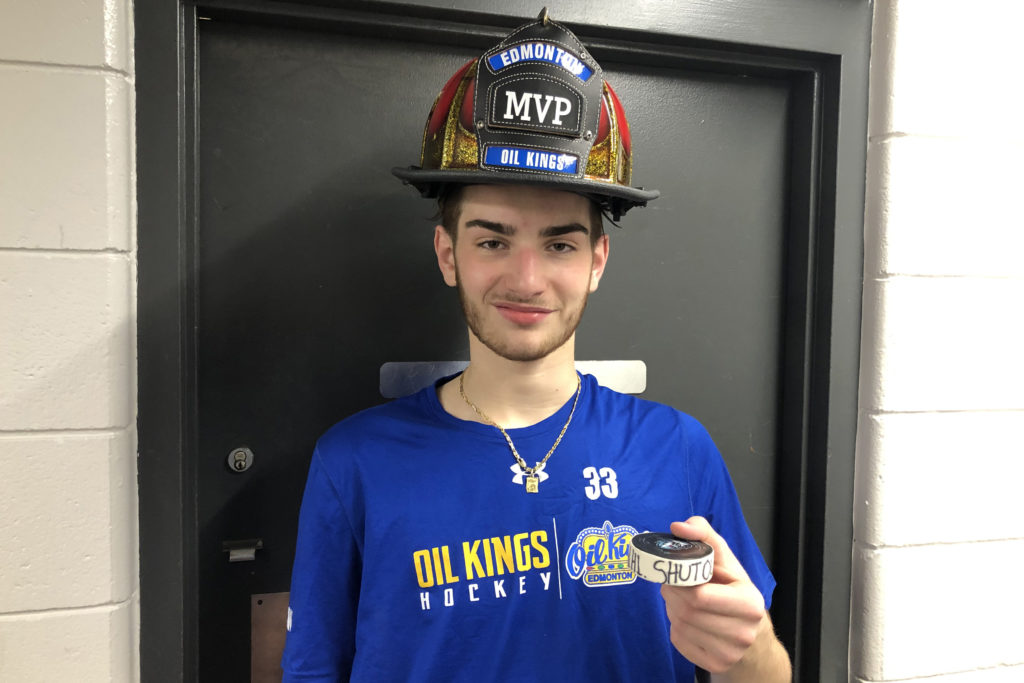 It was a historic night in Winnipeg, but the biggest storyline wasn’t the first ever meeting in League history between the Edmonton Oil Kings and the newly relocated Winnipeg ICE.

Sixteen-year-old goaltender Sebastian Cossa made his first WHL start and stopped all 40 shots he faced to earn his first career win – a 7-0 shutout – at the Wayne Fleming Arena on Friday night.

The Fort McMurray, AB native made 14 saves in the first period, 18 in the second, and finished with eight in the third en route to the memorable milestone. Cossa’s teammates certainly had his back, as seven different Oil Kings (3-1-2-0) etched the scoresheet to work together and earn the convincing victory over the ICE (3-2-1-0).

The emphatic win snapped a three-game losing skid for the Oil Kings, albeit the team had mustered a point in overtime in two of those previous three games.

As well as seven different scorers, the Oil Kings also boasted four players with multi-point performances led by Josh Williams (1G, 2A), Riley Sawchuk (1G, 1A), Wyatt McLeod (2A) and David Kope (2A).

Liam Keeler, Jake Neighbours, Conner McDonald and Vladimir Alistrov were the other Oil Kings goal scorers on the night, while other impressive performances were given by McLeod and Jacson Alexander, who tied for a team-leading plus/minus of +4 on the night.

Perhaps overshadowed by all the offence and accolades of the night was the fact that the game saw the showcase of the two most recent first overall picks from the WHL Bantam Draft in Dylan Guenther (EDM, 2018) and Matthew Savoie (WPG, 2019).

The Oil Kings got off to their best start of the season on Friday, and it began with a goal by Keeler who notched his second of the season, assisted by McLeod, to give Edmonton a 1-0 lead just 2:39 into the opening frame.

They would make it a 2-0 game just 2:21 later as Williams registered his third of the season, assisted by Alexander, at the five-minute mark.

Also registering his third of the campaign was Alistrov, who made it goals in three straight games to extend the Oil Kings lead to 3-0 at 8:41, with helpers to Williams and McLeod, to round out first period scoring.

Shots were tight in the opening frame, but tipped the scales in Winnipeg’s favour, 14-13.

At 13:17 of the second, McDonald tallied his first of the season – unassisted – to make it 4-0 Edmonton. The goal by the veteran defenceman was his first of the season but 37th career goal as an Oil King, bringing the Delta, BC native to within one goal of tying former Edmonton captain Aaron Irving (38, 2013-16) for the most goals scored by a rearguard in modern franchise history.

Before the period was out the Oil Kings would see a goal from their fifth different scorer just 1:17 later, as Sawchuk buried his team-leading fourth goal of the season, from Kope, to close out scoring through 40-minutes of play.

Atkinson’s third goal of the season opened the scoring in the third period to make it 6-0 Edmonton at 9:48, with the lone assist giving Williams his third point of the outing.

Less than two minutes later it was 7-0 Edmonton, as a pretty, behind-the back, no-look pass in the neutral zone by Sawchuk found his linemate Neighbours who made no mistake, potting his second of the season to seal the win, with Kope earning the second assist.

Winnipeg was 0-for-5 on the power play while Edmonton went 0-for-2 with the man advantage.

The Oil Kings continue their five-game road trip when they face the Brandon Wheat Kings tomorrow, Saturday, October 5 at 6:30 PM MT (7:30 CT). Their next home game at Rogers Place is Saturday, October 12 when they host the Calgary Hitmen at 7:00 PM MT.