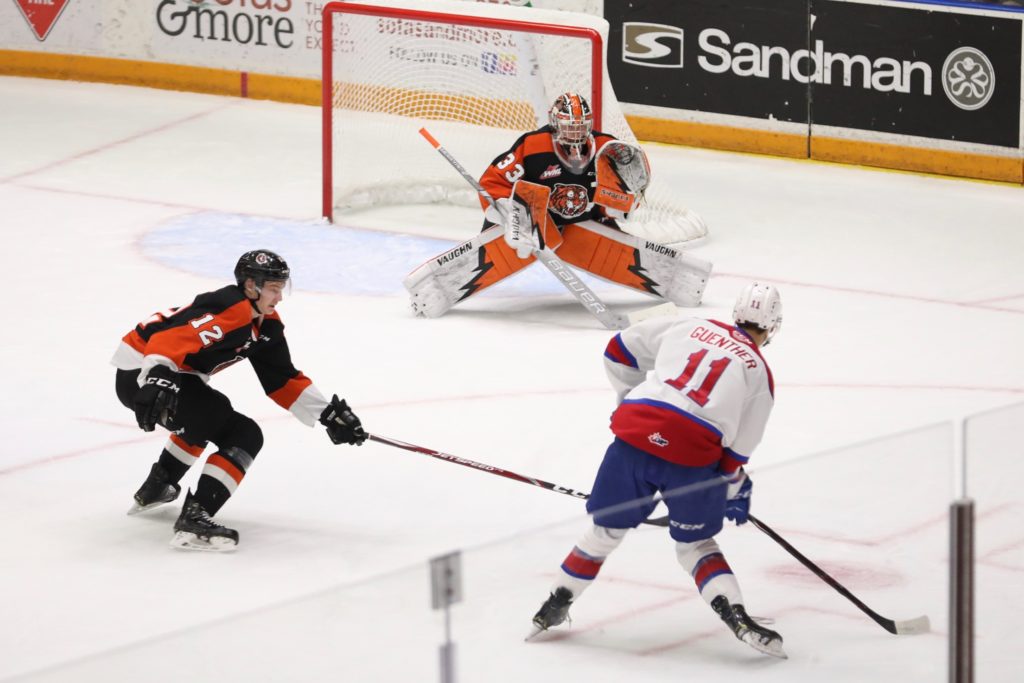 There has been a common focus permeating the Edmonton Oil Kings dressing room over the last number of days; to finish the unofficial first half of the Western Hockey League’s regular season strong.

Facing a team nipping at their heels in the Eastern Conference standings, they roared out of the gates and did just that on Saturday night.

It was a statement win for Edmonton, who enters the holiday break having now gone unbeaten in regulation in their last eight games (7-0-1-0).

Sebastian Cossa (12-2-1-1) was once again impressive, making 28 of 29 saves in a pivotal match-up against a divisional foe.

Garin Bjorklund (11-3-0-0) suffered just his third loss of the season, being humbled by seven goals while making 24 saves on 31 Oil Kings shots strewn his way.

Josh Williams (2G, 2A) and Scott Atkinson (2G) were two-goal performers in the win, while Carter Souch (1G, 1A) and Riley Sawchuk (2A) also registered multi-point nights. Dylan Guenther and Matthew Robertson were the other goal scorers for the Oil Kings, who enjoy 51 points through their 35 games played – the most games by any WHL team to this point in the season.

The Oil Kings got on the scoresheet early and often, as Guenther started things off with his 10th of the season on the team’s first shot of the game, splitting the defence at 2:25 to give the visitors a 1-0 lead. Jake Neighbours and Ethan Cap earned the assists.

Just eight seconds later it was 2-0 Edmonton, as the Oil Kings cashed in on their second shot on goal after Robertson pinched, drove to the net, and lasered the puck over Bjorklund blocker-side, from Williams and Souch, at 2:33.

Less than two minutes later they extended their lead to 3-0 on their third shot of the night, as another defensive breakdown through the neutral zone resulted in Atkinson breaking in on the far side all alone, curling towards the net then making no mistake for his first of the night at the 4:20 mark, unassisted.

But the Tigers would get on the board, capitalizing on a goal-mouth scramble which left Cossa sprawling and unable to regain positioning in time to make the save, rounding out first period scoring at 7:38.

Shots on goal in the opening frame were 12-8, Edmonton.

In the second just one goal was scored, and it belonged to the Oil Kings captain for his second of the night. Some perfect patience from winger David Kope produced a precision-feed through the legs of a Tigers defenceman to find the stick of Atkinson for his eighth of the season at 9:45. Jalen Luypen notched the secondary assist to send the game into the second intermission with Edmonton leading, 4-1.

Shots on goal in the middle frame favoured Medicine Hat, 8-6, and were slightly in Edmonton’s favour through 40 minutes, 18-16.

Just past the midway point of the third the Tigers thought they had made it a 4-2 game at 10:33, but upon review it was decided there was no goal and the score remained 4-1.

Ironically, just 16 seconds later the script was flipped and it was Williams and the Oil Kings celebrating a goal that was soon to be reviewed, however this time the result was different, and ended in Williams’ 15th of the season, unassisted, to make it 5-1, Edmonton.

The stoppages in play seemed to provide a surge for the Oil Kings, as Williams pounced for his 16th goal of the year – and second marker in a span of 35 seconds –  to give his team a 6-1 lead, from Riley Sawchuk at 11:24.

As Tigers tempers flared the Oil Kings once more capitalized – this time on the man advantage – to extend their lead to 7-1 via Carter Souch’s 11th of the season, from Williams and Sawchuk, to round out the high-octane offense of Edmonton at 13:52.

Medicine Hat was 0-for-5 on the power play, while Edmonton was 1-for-8 with the man advantage.

The Oil Kings return from the holiday break on Friday, December 27 when they travel to Red Deer to take on the Rebels for a 7:00 PM MT start. The two teams meet again the next night for the first game at Rogers Place in the second half on Saturday, December 28 at 7:00 PM.