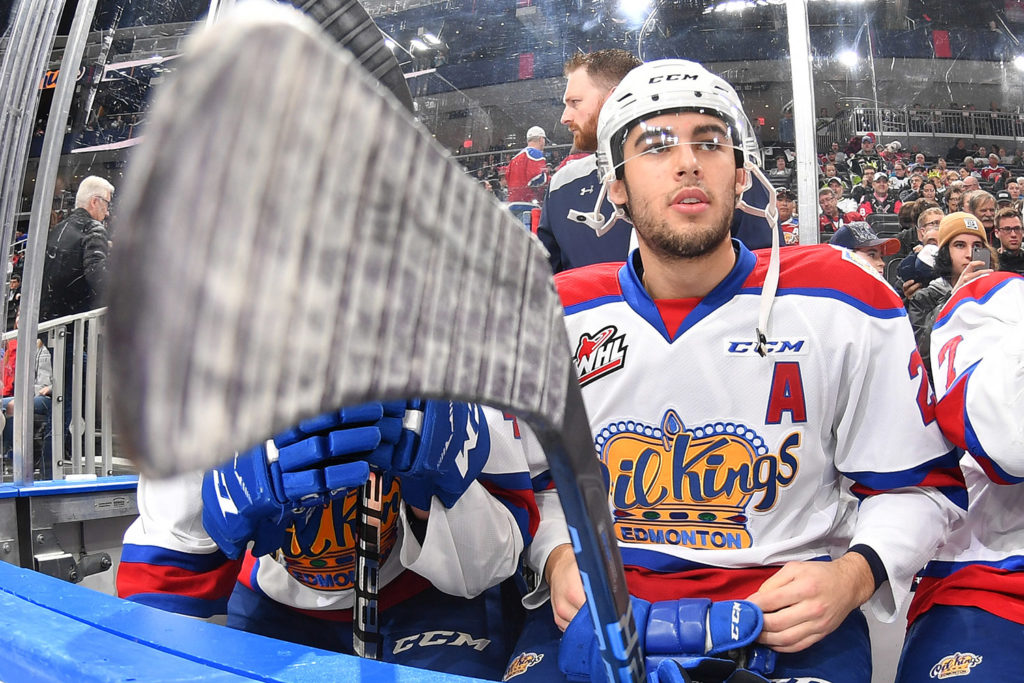 It all began in July when the 6-foot-3.5, 198-pound rearguard was one of 44 players named to a five-day selection camp at WinSport’s Markin MacPhail Centre in Calgary competing for a spot with Team Canada for the 2018 Hlinka Gretzky Cup.

Robertson was one of 21 CHL players named to the squad, and before he knew it he was sporting the red, white and black of Hockey Canada in his home arena as the tournament got underway at Rogers Place in Edmonton.

For Robertson, it prepared him for what would be the first of many instances over the course of the season that he would be in the national spotlight.

“I was named to the tryout camp, then as soon as I made the team the tournament basically started right away,” explained Robertson of the whirlwind ride. “Not only was it special to know I would be playing for Team Canada, but I was going to get the chance to do it in front of friends and family here in Edmonton. It was a surreal experience getting to play against some of the best players my age.

“It was something I’ll remember for a lifetime, and it helped me transition into an important year for me last year as well.” 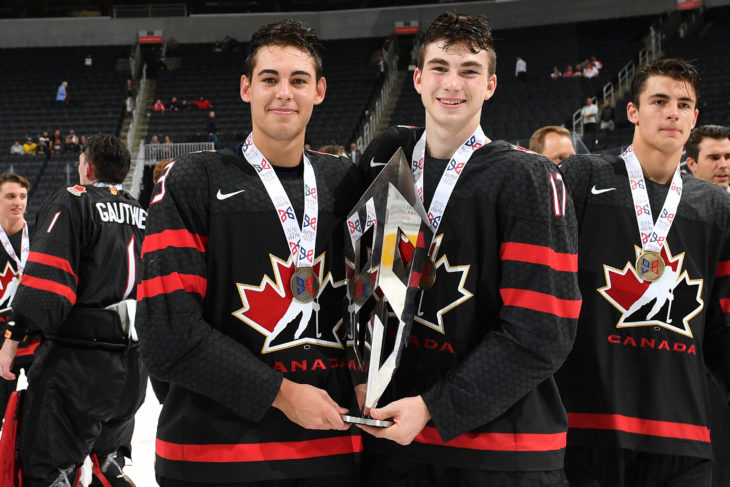 The tournament culminated in a gold medal for the Canadians, but it was a literal last second game-tying goal against the United States in the semi-final by Dylan Cozens, followed by the game winner by future Oil Kings teammate Josh Williams in a 6-5 overtime win that may have sparked the most excitement for the team throughout the tournament.

“It was special to win gold and get to celebrate with my teammates,” said Robertson, “but that was an unbelievable game against the States.

“That’s definitely up there when it comes to thinking back about a highlight of the tournament.”

Fresh off of celebrating the victory he remained at Rogers Place for his second full Western Hockey League campaign, and his first year of NHL Draft eligibility. The season began with Robertson sporting an ‘A’ on his jersey as one of the newest – and youngest – alternate captains in Oil Kings history; a reflection of his potential and promise to help lead a team on the brink of vastly improving its fortunes.

His impact on the 2018-19 Oil Kings squad was quickly noticed through the first half of the season and resulted in an eventual invitation to participate in the Sherwin-Williams CHL/NHL Top Prospects Game in Red Deer in January. 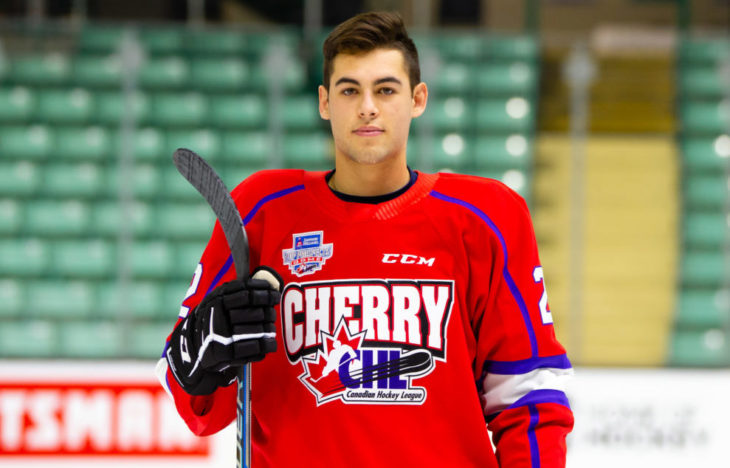 “The Top Prospects Game is really different from Hlinka [Gretzky Cup] in a lot of ways,” Robertson said. “At Top Prospects you learn a lot of specific systems and a lot of guys are concentrating on showcasing themselves. It’s a different game.

“Lots of guys that I played with [at Top Prospects] maybe I’ve never met before, so it’s a quick turnaround but I think the whole time there was really important for my growth.”

While some faces at Top Prospects were new to Robertson, some were incredibly familiar – and not just players from the WHL, either. Participating in international selection camps and tournaments allowed him to build a rapport with players across the country, such as Ontario Hockey League defenceman Michael Vukojevic from the Kitchener Rangers.

“It’s pretty cool getting to know guys like Vuks [Vukojevic], even though they play in a whole different League,” he said. “Not only do you play with those guys in some important games and tournaments, but you actually become friends with them. It’s cool to have familiar faces no matter where you’re playing.”

Robertson went on to tie his mark in goals from the previous season (7) and set a new high in assists (26) in 15 fewer regular season games. He turned a plus/minus rookie campaign of a -18 rating full circle to a +18, and was one of the leaders in ice time throughout the tail end of the regular season and the Oil Kings lengthy playoff run to the Eastern Conference Championship. 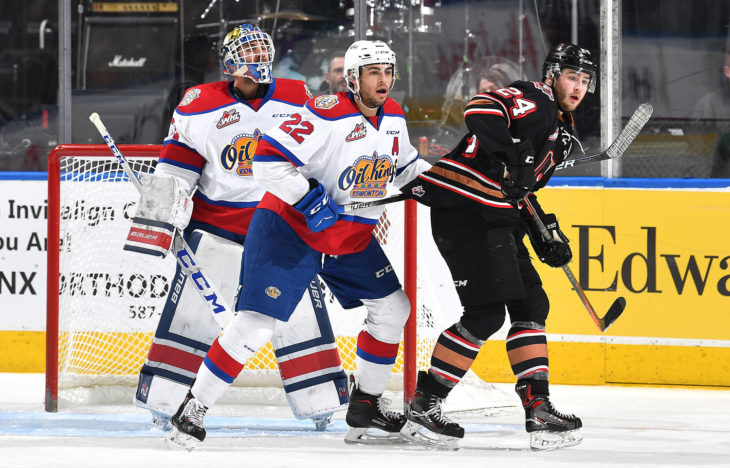 After a few weeks of downtime when the playoff run was all said and done, he was on his way to Buffalo for the NHL Draft Combine ahead of the draft in Vancouver in June. There was never a doubt if he would hear his name called, it was just a question of when, and by which team.

That instance finally came to be when he was selected by the New York Rangers in the second round, 49th overall.

“I’d say I was a little bit nervous, just not knowing what to expect,” he said of waiting to be drafted. “But when I heard my name called it was definitely a sense of relief and a moment I’ll remember for the rest of my life.

“The Rangers are an Original Six team and a top-notch organization that I’m very proud to be a part of.” 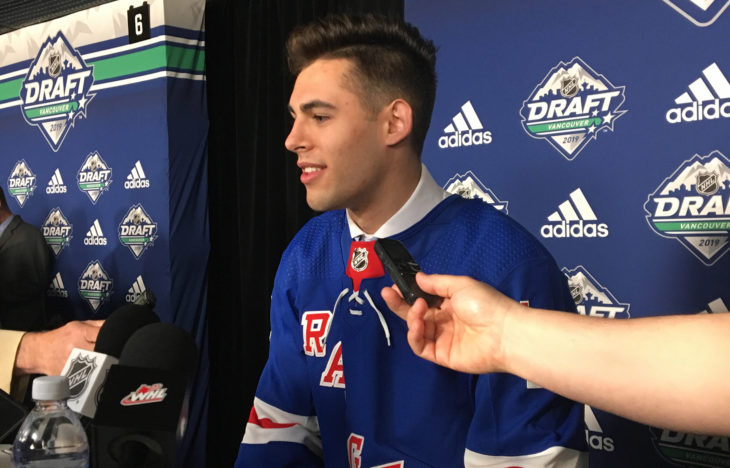 Enriching the experience was the fact he was able to congratulate and share the day with friends who were also chosen by NHL teams over the course of the two-day event, including third overall pick of the Chicago Blackhawks, Kirby Dach.

“I’m pretty close with Kirby, so it was cool to see him there,” Robertson said. “There were other guys I saw at the draft who were teammates of mine on Team Canada like [Bowen] Bryam, [Dylan] Cozens and [Michael] Vukojevic. It was great to see them and experience it all with them too.”

Soon after the draft came development camp, and the first ever trip to New York City for Robertson, who said the coolest part of his travels was seeing ‘The World’s Most Famous Arena’ itself, Madison Square Garden.

“Just seeing MSG and seeing downtown was surreal,” he reflected. “It was pretty cool that the ice is actually on the fifth level of the building, above Penn [train] Station. Just the history of the arena and all the cool things that have happened in that building, it was pretty special to see and learn about.” 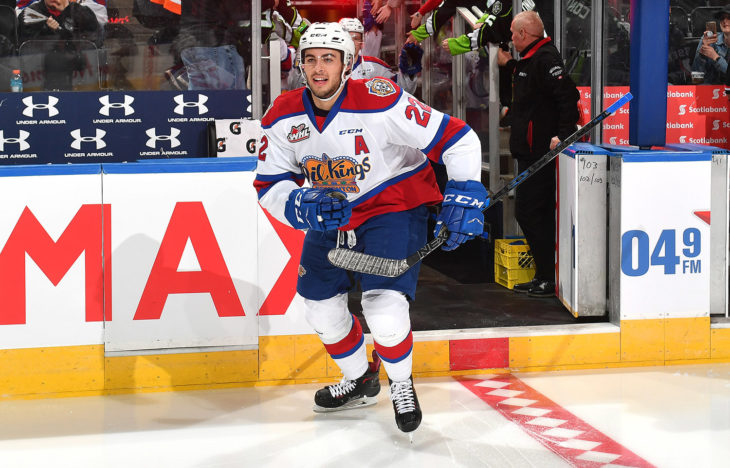 As he finally takes some time to let everything he’s accomplished over the course of the last twelve months sink in, it will soon be time to start the cycle all over again on a brand new season.

Except this year, his goals will change.

He’ll set out to keep improving his own game, meanwhile continuing to grow as a leader to his existing and new, younger teammates.

“Training Camp will start before you know it,” he said. “The offseason flies by, but now I’m just working on getting stronger and fitter. I’m looking to be consistent this season, and looking forward to taking on even more of a leadership role.”

He certainly has lots of experience to draw from, but also has a resource at hand that not many have the opportunity to take advantage of – an older brother, Tyler, who is an Oil Kings alumnus and Memorial Cup champion in 2014. 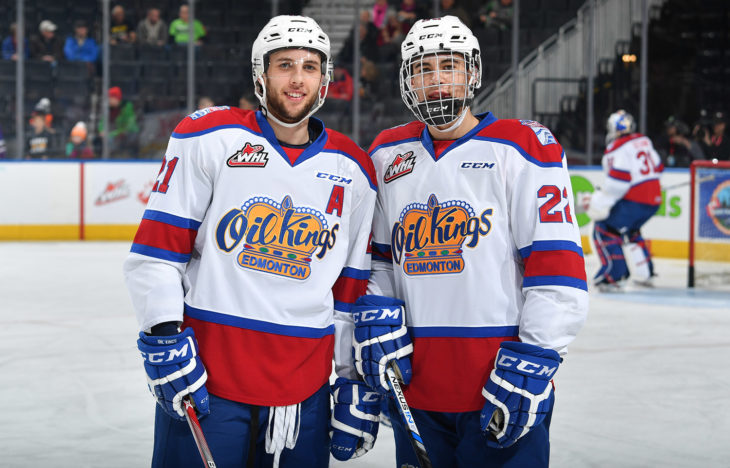 “My brother has definitely given me a ton of advice along the way, since he’s been through a lot of this himself,” Robertson said. “Obviously they won it all five years ago, so he was able to give me a lot of guidance during our playoff run last year. He told me it would be a long year and told me how to prepare myself and how to deal with the grind.”

Robertson hopes that he can take what he’s learned from his brother, but also from other Oil Kings captains he’s played under – Trey Fix-Wolansky, Colton Kehler and Aaron Irving – when imparting knowledge on teammates during the 2019-20 season, and beyond.

“It wasn’t too long ago when I came into the League as a younger guy and the same was done for me. I was taught that as long as you always work hard and do your best and compete, that’s what’s most important.

“Also, to always stay positive. That’s the type of leader I hope I can be for this team.” 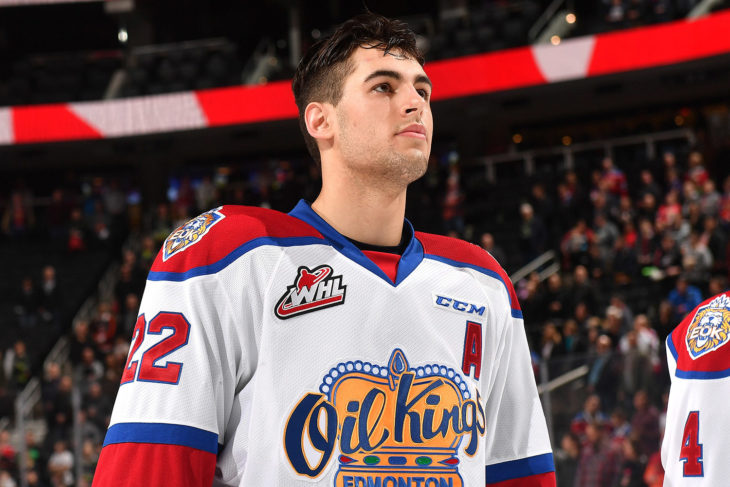