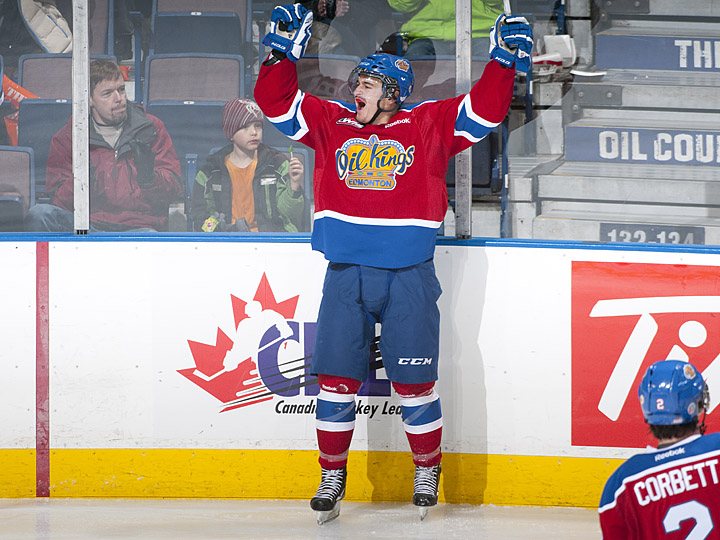 Edmonton, AB – The Oil Kings would like to congratulate dynamic forward Michael St.Croix on his selection as WHL player of the week for his masterful performance from November 28th to December 4th.

St.Croix posted eight points with three goals and five assists to help the Oil Kings to a 3-0-0-0 record with wins over the Spokane Chiefs (4-1), Calgary Hitmen (6-1) and the Saskatoon Blades in a 8-3 drubbing last night at Rexall Place. The win was the Oil Kings sixth in a row, a modern era franchise first and has helped Edmonton move into second place in the highly contested Central Division standings.

The native of Winnipeg, MB has continued his recent hot streak which has seen him post nine goals and ten assists along with a plus-13 +/- rating in his last seven games. St.Croix’s linemates Dylan Wruck and Tyler Maxwell have both contributed, with Wruck totalling 11 points in his last five games and Maxwell nine with five goals.

A 4th round NHL Draft pick of the New York Rangers in 2008, St.Croix is in his third full season with the Oil Kings and has totalled 62 goals and 164 points in 165 WHL games. He was originally drafted by the Oil Kings in 2008, as Edmonton made him their first selection, fourth overall in the WHL Bantam Draft. Last year, St. Croix posted the Oil Kings single season modern franchise record with 48 assists and finished his season with a career high 75 points and a plus-28 plus minus rating.

The Oil Kings, along with St.Croix, will play the sixth game in their run of 11 straight at home this Tuesday as they take on the Calgary Hitmen. Puck Drop is set for 7PM MST at Rexall Place – all games this season will be broadcast live on the TEAM 1260 and streamed live at WHL.ca