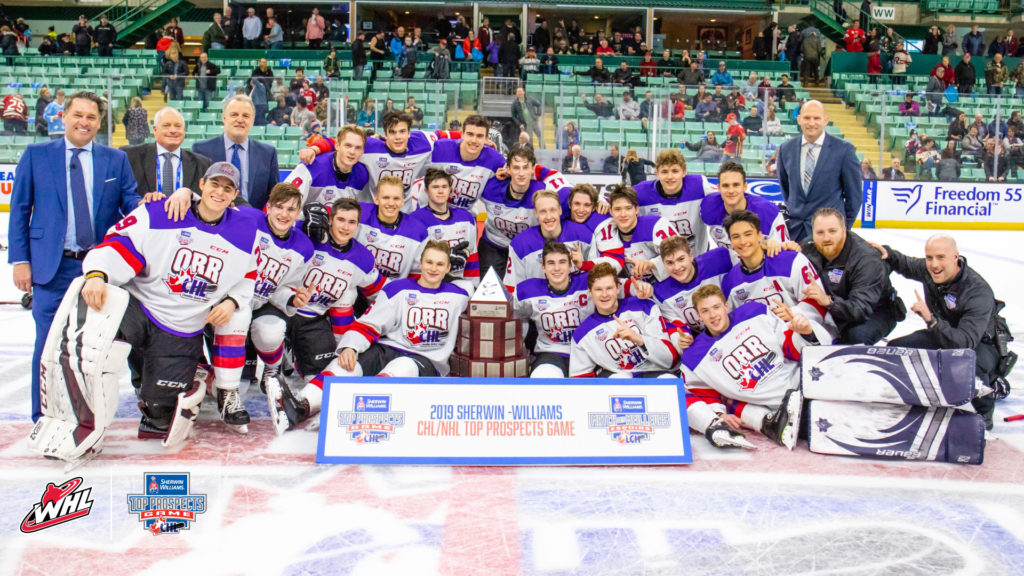 After trailing 4-1 in the third period, it was Josh Williams and Team Orr who rallied to a 5-4 win over Matthew Robertson and Team Cherry in the 2019 Sherwin-Williams CHL/NHL Top Prospects Game at the Enmax Centrium in Red Deer on Wednesday night.

Team Orr scored three times in the final four minutes of regulation, recovering from a 4-1 deficit to claim victory in the 24th Sherwin-Williams CHL/NHL Top Prospects Game as Clarke earned Jim Gregory Player of the Game honours for his team with a goal and an assist. 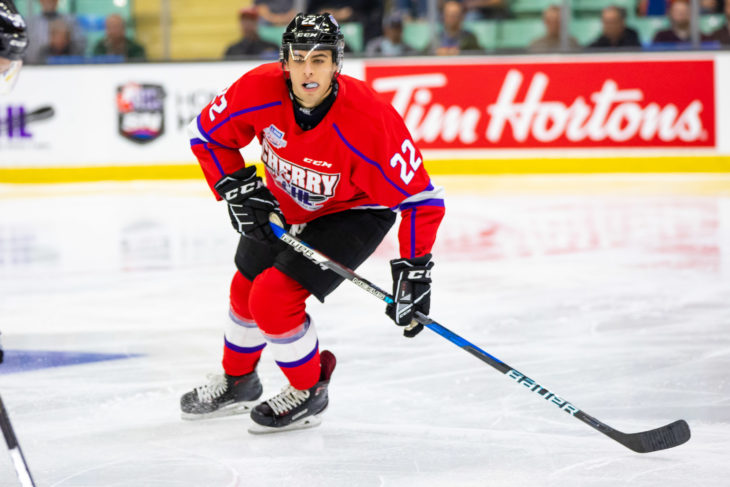 Kaliyev didn’t waste any time putting Team Cherry on the board, using a quick release to give his team a 1-0 lead inside the first minute of action. Robertson set Kaliyev up for a perfectly placed one-timer, pausing to flip a cross-ice backhand pass onto his tape.

Big winger Samuel Poulin (Sherbrooke Phoenix) would extend the Cherry lead to two beyond the midway point of the period. Stationed in the slot on the power play, Poulin whacked a rebound past Hunter Jones (Peterborough Petes) at 11:56 as defencemen Michael Vukojevic (Kitchener Rangers) and Thomas Harley (Mississauga Steelheads) gathered assists.

Down 7-1 on the shot clock at that point, Team Orr would find some life late in the first but Team Cherry netminder Mads Sogaard (Medicine Hat Tigers) was up to the task, stopping all eight shots he faced.

Team Orr came out with some jump in the second, forcing Sogaard into an early denial of Nikita Alexandrov (Charlottetown Islanders) as he walked out of the corner.

A sensational solo effort broke the offensive silence for Team Orr as Clarke made his way around an opposing defender before tucking a forehand deke past Sogaard at 4:29. 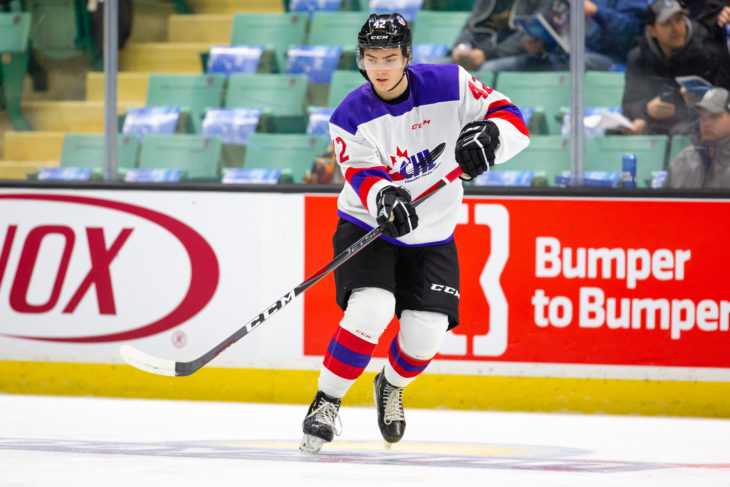 The high-paced second period saw the two clubs combine for 31 shots on goal as Krebs reinstated the two goal lead for Team Cherry with 2:59 left on the clock. Robertson picked up his second primary assist of the game, this time on the power play as he found Krebs creeping in off the point for the finish.

Kaliyev pushed Team Cherry ahead by three with his second goal of the night 2:18 into the third period. Robertson collected his third assist in the process as Ron MacLean’s club looked to be in full control with a 4-1 lead.

Jakob Pelletier (Moncton Wildcats) got the momentum swinging back the other way with help from Kirby Dach (Saskatoon Blades) and Leason at 4:42. The speedy winger slipped a backhand deke through the five-hole of Gauthier to cut the Team Cherry lead to two.

After Okhotyuk scored on a point wrister through traffic with 4:01 remaining, Leason followed up with the game-tying goal less than a minute later, doing so with an assist from defenceman Jake Lee (Seattle Thunderbirds).

McMichael completed the comeback just 26 seconds later, putting Team Orr back in the win column following consecutive losses in the past two years at the Sherwin-Williams CHL/NHL Top Prospects Game.

Colten Ellis (Rimouski Océanic) picked up the win in goal, turning aside 15 of the 17 shots he faced in relief of Hunter Jones (Peterborough Petes). Jones departed with his team trailing 2-1 having stopped 18 of the 20 shots that came his way.