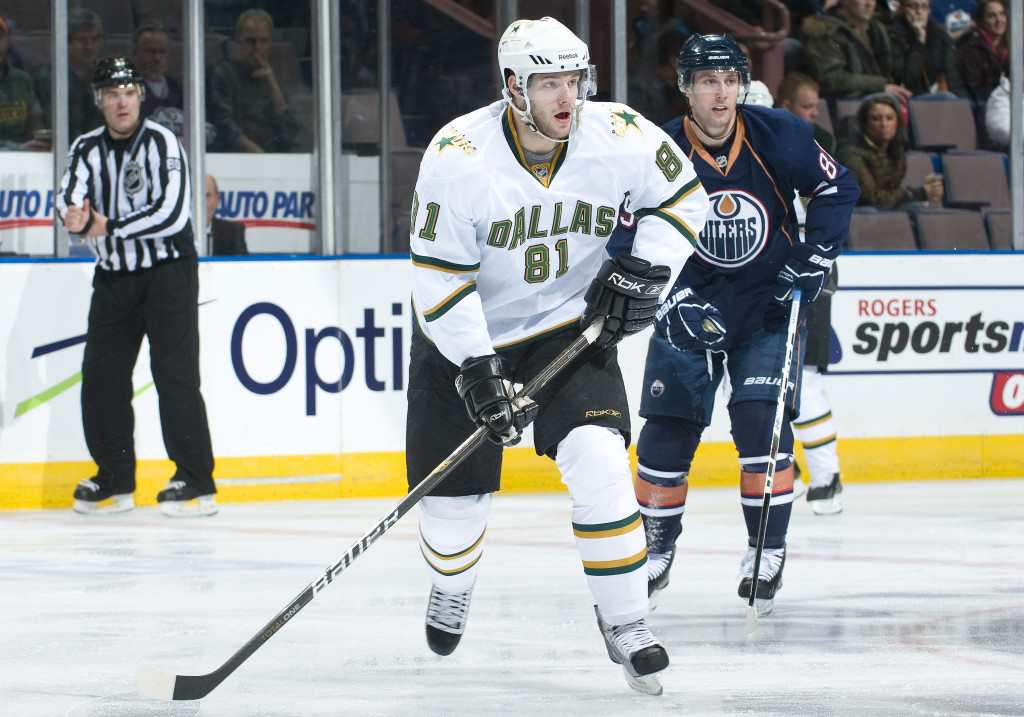 Edmonton, AB – It was a bittersweet return to Edmonton for former Oil Kings star forward Tomas Vincour on Tuesday night, as his Dallas Stars lost 4-1 to the hometown Oilers at Rexall Place.

The right-winger from Brno, Czech Republic spent two and a half seasons competing for the Oil Kings at Rexall Place, as he was the WHL squad’s first round (first overall) selection in the 2007 CHL Import Draft.

Vincour tallied 50 goals and 51 assists for 101 points in his time with the Oil Kings, helping the team to its only modern playoff appearance in 2008-09. The 6-foot-2 power forward was selected by Dallas in the fifth round (129th overall) at the 2009 NHL Entry Draft while he was a member of the Oil Kings.

Vincour became the modern Oil Kings franchise’s first former player to compete at the NHL level when the Stars called him up from their American Hockey League affiliate, the Texas Stars, on Feb. 6. He made his NHL debut on Feb. 9 against Phoenix, and also played Chicago and Columbus prior to making his return to Edmonton on Tuesday to take on the Oilers at Rexall.

The 20-year-old played 15 shifts against the Oilers for a total ice time of 11:26. He also had three shots on goal, including a one-timer on a two-on-one break with linemate James Neal midway through the first period. It ended up being the best scoring chance of the frame for either team, but Vincour’s attempt was turned aside by goalie Nikolai Khabibulin. He’s still looking for his first NHL point.

“He dished it to me perfectly, but I hit him right in the stomach,” Vincour said of the scoring chance. “I’m getting more shots, but now I have to start burying my chances. I feel more confident out there every game, and I have to keep it up, keep doing the simple things and play hard every shift. It’s a great time for me to step it up right now while we have lots of injuries.”

Vincour wasn’t in Edmonton for much more than 24 hours, but he accomplished quite a bit of visiting in that short time. He visited his former Oil Kings billets, the Petruk family, on Monday night and also had a reunion with his former teammates in his former dressing room after the Stars’ practice on Tuesday.

“It’s been great to be back in Edmonton, even though it was a tough loss for us tonight,” said Vincour, who was given a warm reception from the packed house at Rexall when he was recognized on the big screen during the second period. “It was my pleasure to play here with the Oil Kings, so it was great to see all my friends and my billet family again.”

Vincour also reunited with Oil Kings General Manager Bob Green, who originally brought him to Edmonton thanks to the 2007 Import Draft. Green said he hopes the alumnus takes advantage of his opportunity and starts a trend of many more Oil Kings making the jump to the NHL.

“It’s a great opportunity for him and it’s nice to see him come back to Edmonton and get to play one of his first NHL games in familiar surroundings,” Green said. “Hopefully he can take advantage of this opportunity and turn it into something more long-term. It’s exciting that Tomas is our first former player to make it to the NHL, and hopefully he’s just the first of many to come.”

And speaking of Edmonton’s up-and-coming future NHLers, the current Oil Kings are back home this Friday night to play the Kamloops Blazers at 7 p.m. at Rexall Place for Singles Night, as a section of the crowd will be reserved for eligible bachelors and bachelorettes to meet, mingle and cheer on the home team.